The Day of the Beast

After languishing in inferior format hell for ages, Alex de la Iglesia's The Day of the Beast is reborn unto Blu-ray with an impeccable special edition from Severin. The story of one priest's mission to stop the Antichrist by committing any number of grave and terrible sins will either have you laughing or clutching your rosery. With a strong video transfer, great audio mixes, and informative bonus features, if you haven't upgraded to 4K, this 1080p Blu-ray is a worthy addition to your horror/comedy collection. Highly Recommended

"What I take away from this movie are the dangers of going whole hog into a belief system. While religiously geared, this film's ideas can be hit at anything from politics to metaphysics to deep conspiracy theory. When you get to that place where you spin any counterargument as the opposite of a negative being a truth, then you've gone so deep into the well that you can't come back from it. Cura could be right, but there's ample evidence he could be very wrong and blind to the actual truth and he's now dragging other people down into his world. Again, The Day of the Beast is a pitch-black satire. It's taking some strong shots at a lot of targets and most of the time it's pretty damn hilarious. 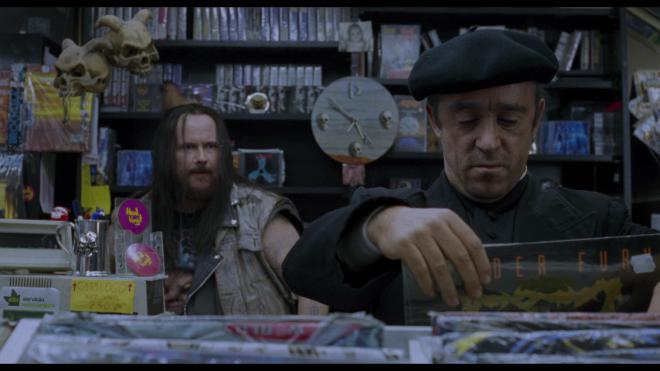 To that end, the Alex de la Iglesia style isn't for everyone. The first film of his I ever saw was 2010's The Last Circus and putting it positively I'd call that a bat-shit crazy movie. Iglesia's movies are often like stepping into a fever dream and not sure how to get the hell out. Stuff just happens and you gotta go with it or go insane trying to figure it out. Over the last few years, I've dug into his back catalog here and there. Most of his films are pretty good, very imaginative, and stylish. Some feel oddly out of reach and I just couldn't get into them. In contrast, The Day of the Beast is at least narratively focused with Iglesia's penchant for near-constant manic energy. It gets nuts, but it follows a throughline that's easy to follow. Whether or not you enjoy the journey is entirely a different topic of conversation.

Through it all, the cast delivers an amazing set of performances. The late great Alex Angulo is terrific as Father Cura delivering deadpan and physical humor with grace. He's doing horrible things but he genuinely believes he's saving the world and there's something delightfully funny about his efforts. Then we have Santiago Segura as the lovable but dim Jose Maria who just goes along for the ride. After that, we have Armando De Razza as the popular T.V. psychic Cavan - the man who seems to be the only rational one of the bunch but then falls deeper into Cura's quest.

The Day of the Beast isn't for everyone, but I thoroughly enjoyed this one. I tend to have to review movies absurdly early in the morning to give them my full attention and this was a hell of a way to wake up. Still half asleep with only one cup of coffee in me I dove into this one head first without knowing too much about it beyond the main plot. It took mere moments for it to grab my full attention and I got a kick out of it. If dark horror-comedy is your bag, The Day of the Beast should be on your list."

Vital Disc Stats: The Blu-ray
The Day of the Beast is available in a single-disc 1080p Blu-ray release separate from the 4K Ultra HD Blu-ray. The disc is housed in a standard sturdy keepcase and if you order direct from Severin it comes with a slipcover in addition to the reversible insert artwork. The disc loads to an animated main menu with traditional navigation options. 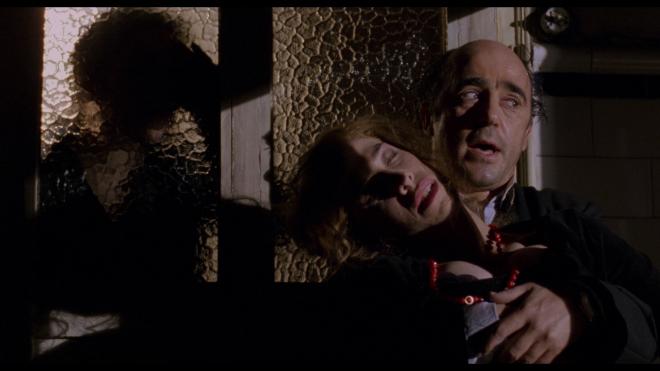 In 1080p Blu-ray, Severin delivers another cult favorite to high-definition with excellent results. Full disclosure, I did watch the 4K UHD Blu-ray disc first and I will make no bones about my clear preference for that release over this one. However, if Severin didn't go for the 4K disc release, this would still rank as a top-tier effort. This diabolical movie has been lovingly restored and the results are damned impressive. Details are excellent allowing for full appreciation of facial features, clothing, and the fun production design details found throughout the film and the Madrid locations.

Film grain is well resolved, thicker in some of the darkest scenes, but still maintains that desired film-like apperaince. Colors are bold with some great primary action. Whites and black levels deliver, however doing some side-by-side between discs, the black levels for the 1080p can be a bit thicker and closer to crush than the 4K HDR transfer. The low-rez visual effects are still a sticking point here as well, it's simply a product of the time and again without an exhaustive complete overhaul, it's probably not possible to make much of an improvement there. But if old visual effects are the only downside of a release, that's not much of a complaint. If you're not intending to upgrade to 4K any time soon, this 1080p Blu-ray is worthy. 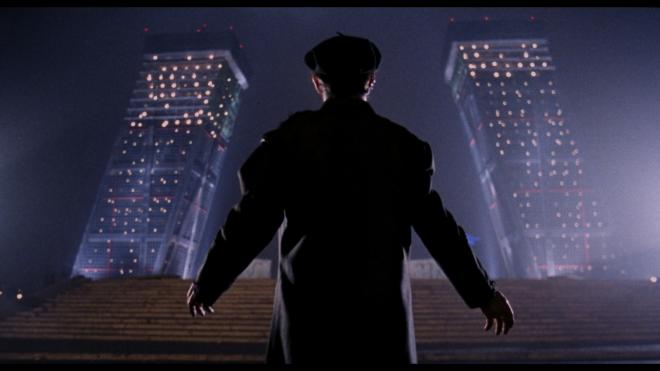 Both the 4K UHD Blu-ray and 1080p Blu-ray arrive with the holy trinity of audio options - a Spanish DTS-HD MA 5.1 mix, a DTS-HD MA 2.0 stereo mix, and an English dubbed DTS-HD MA 5.1 mix. In truth, all of these tracks are excellent. If you're not in the mood for subtitles, the dubbing for this film isn't half bad and actually has pretty decent voice work for the actors. Ideally, you'll choose one of the Spanish mixes as they sound the most natural to the film. Levels are spot on without issues. Scoring adds mood to the show. The 5.1 track offers some great atmosphere with solid surround placement and activity. The 2.0 mix is strong in its own right but doesn't quite hit the nail as hard. 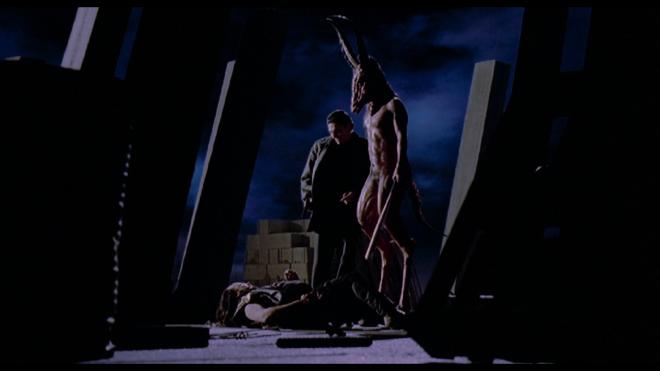 Alex de la Iglesia's delightful black comedy horror masterpiece The Day of the Beast earns a truly special edition release from Severin. The coal-black humor of this film may not be for everyone, but for those who don't take everything in life quite so seriously, this is a wild ride. It put me on the floor fast and kept the laughs coming throughout. This disc sports an excellent A/V presentation with some interesting informative bonus features to pick through. If you're not jumping on 4K, this is a great disc for the shelf. Highly Recommended.