Hercules and the Captive Women

His strength, love of brawling, swagger with the ladies, and his desire to sleep are unmatched. He is Hercules! Reg Park picks up where Steve Reeves left off with Hercules and the Captive Women - another classic Italian Peplum epic featuring grand sets, impressive costumes, and a goofy rubber lizard. Better known for its MST3k counterpart, it’s a big epic adventure that never fails to entertain. The Film Detective delivers a terrific Blu-ray release with an impressive new transfer and a solid assortment of bonus features. Recommended.

When Greece is experiencing severe atmospheric anomalies, Hercules (Reg Park) would much rather stay at home with his wife and son and sleep the day away than solve the problem. He wakes up shanghaied into the quest to help his friend Androcles (Ettore Manni) the King of Thebes solve the mystery. When he becomes shipwrecked and Androcles lost, Hercules quickly discovers that the powerful Queen of Atlantis (Fay Spain) is using the stone of Uranus to create a powerful army to try and take over the world! Will the strongest man alive be able to stop this mystical power and save Greece? 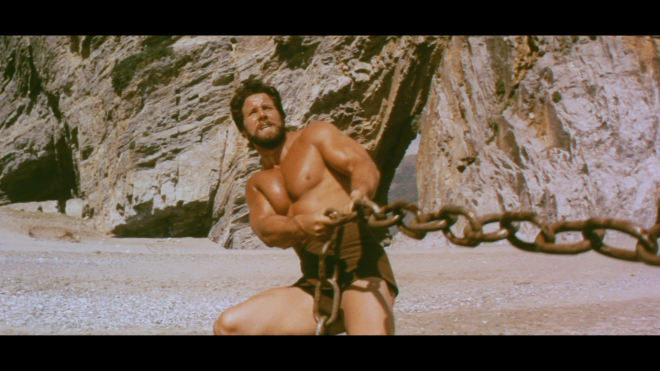 When the sword and sandal epics became the go-to film at the box office, Italy went all-in on the genre. If it wasn’t a high-budget Hollywood production, local producers were enticing top-level talent for their own productions. After the massively successful Hercules and Hercules: Unchained featuring muscleman Steeve Reeves, practically every studio in Italy was ready to churn out a Hercules movie of their own. From Kirk Moris to Brad Harris to Mickey Hagerty - the knock-off machine was working overtime to replicate the Steeve Reeves format of finding a massively huge bodybuilder whilst praying to Zeus he had an ounce of charisma in front of the camera. Reg Park arguably was the only one to really step into the role and pull it off. In four years he would make as many Hercules movies beginning with Hercules and the Captive Women - also known as Hercules Conquers Atlantis.

In his first outing, Reg may not have found his acting A-Game yet; you can feel him trying to act beyond his abilities. Aside from displays of his towering physique, he’s a bit stiff and aloof dialing reactions past the point of normal. This performance would come in handy for the hilarious jokes from the MST3k episode (also included on this Blu-ray), but for drama or suspense - he's not quite there. But it's also the true effort of a first-timer. By the time he was starring in Hercules and the Haunted World with Christopher Lee - he was already fairly warmed up and a much better performer. Steeve Reeves may be the iconic Hercules, but Reg Park leaves his own mark. While Reeves is commonly credited as an inspiration for Arnold Schwarzenegger to explore bodybuilding and an acting career - Reg Park actually trained him leaving a legacy that reaches beyond a few peplum movies and bodybuilding awards from the 1960s.

With their lighthearted nature, it’s pretty easy to knock these Italian Hercules adventures. There’s a goofiness to them that can make the production feel a little cheap, but if you really watch and appreciate them, you can see these aren’t simple churn and burn films. Well, this one isn’t anyway. Some of the other Hercules movies of the era are admittedly terrible, but this one is actually pretty good. The sets are huge, the costumes are lavish and intricate, and the special effects are impressive... most of them at least. Granted the Proteus monster looks like it should be destroying a balsawood model city, but the rest of the film looks great with big-scale optical effects and large stunt sequences with a large cast of full-costume extras.

As I have a ton of respect for this movie and what director Vittorio Cottafavi and Reg Park brought to the screen, I admit that it’s an easy one to laugh with. MST3k made a great run of these Italian Hercules movies for good reason and this was one of their better episodes. Some of Reg’s reaction expressions are damn silly, some of the plot points are a bit daffy, and the English dubbing has a strange stilted pronunciation of “Uranus” which leads to some pretty easy laughs. Whether you’re laughing with it or not, Hercules and the Captive Women is a fun adventure and one of the better Hercules movies out there.

Vital Disc Stats: The Blu-ray
Hercules and the Captive Women arrives on Blu-ray thanks to The Film Detective in a single-disc region free BD-50 disc. Housed in a stander keepcase, the disc loads to a static image main menu with a standard main menu structure. Also included is a 10-page booklet with an essay by C. Courtney Joyner. 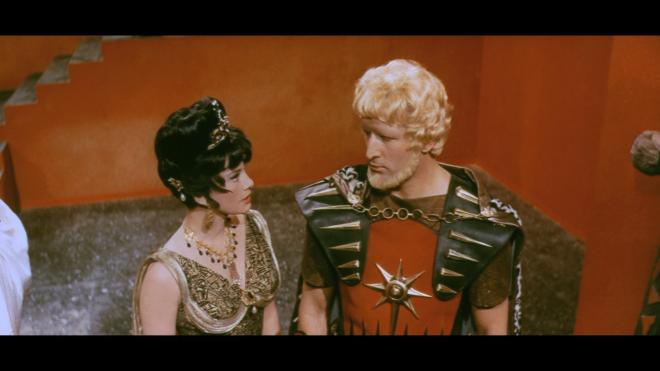 Reportedly this transfer is sourced from a new 4K restoration of the original camera negative - and compared to the old DVDs and the MST3k episode, this is a world of difference! While there is a softness to the image inherent in the photography, there is an impressive amount of details to appreciate. Close-ups and middle shots look the best with appreciable facial features, costumes, and set details.

Film grain is very fine leading me to speculate if maybe a little judicious smoothing wasn’t applied during the restoration effort - but the image thankfully doesn’t have a waxy lifeless texture to it. Colors are beautiful with deep crimson reds and bold blues with warm yellow tones. Black levels can be a bit hit or miss at times, a later sequence in a cave is a little flat with murky green blacks, but most of the image displays terrific depth. Whites are also crisp and blooming is minimal. For a film that’s closing in on 60 years, this is still pretty damn good. Some of the optical effects scenes show some slight frame judder - most notable during fades and transitions. A little bit of speckling remains but nothing severe or distracting. All in all, this is a great transfer for a classic that hasn’t lived its best life on home video until now. 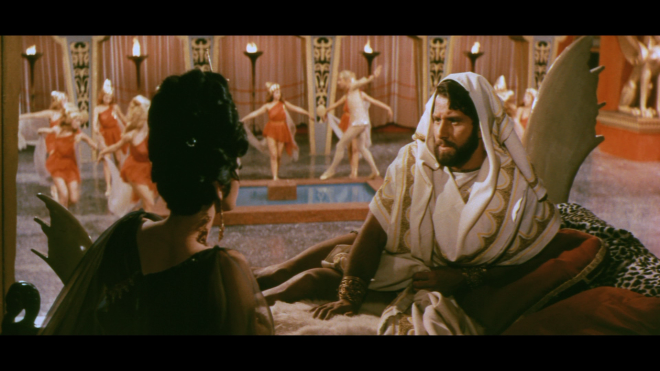 This film also comes packed with a great English DTS-HD MA 2.0 mono mix. As with all Italian films of the era, sync sound wasn’t recorded during filming so there was already an inherent heavy quality to the sound where voices tend to hover over the soundscape with some canned background effects and iffy dialog overdubbing. There are some actors clearly speaking a different language or saying a different line that was changed later for this final mix - that rubber mouth quality is impossible to miss. Scoring is nice and strong pumping up the excitement of the adventure without imposing on the rest of the track. 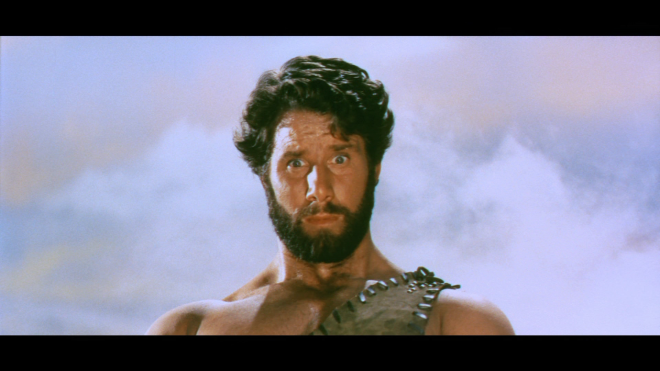 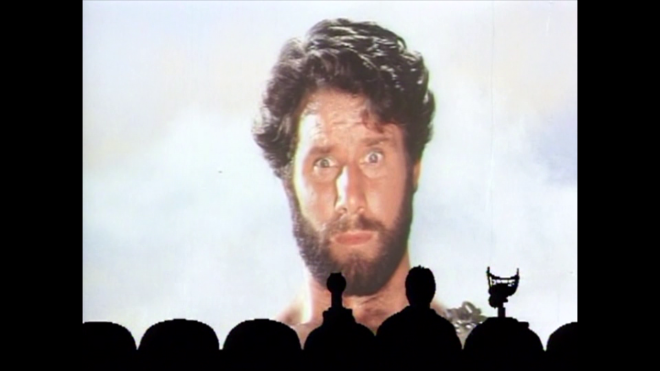 Not to skimp on the bonus features, The Film Detective delivers a worthwhile package of extra features. We get a new commentary from critic and screenwriter Tim Lucas, a new documentary, on top of an introduction from MST3k writer and star Frank Conniff as well as the classic 1992 Mystery Science Theater 3000 episode!

A lot of folks are quick to dismiss the Italian sword and sandals epics as simple “Peplum Movies,” and sure, yeah - a lot of them are pretty bad. Gordon Scott was a better Tarzan than a Hercules. But, there are some great entries and most of the Hercules adventures are standouts. While Steeve Reeves may be the iconic Hercules, Reg Park got four films to prove his muscle in that role beginning with Hercules and the Captive Women. There may be some goofy elements to this fantasy adventure yarn, but it offers big energy, humor, and plenty of action with impressive production values.

The Film Detective has done a great job delivering this 1960s classic to Blu-ray with a sparkling new transfer that leaves previous home video editions in the dust along with a set of worthwhile bonus features including the classic MST3k episode. If you’re a fan of these movies, purchase with confidence. Recommended.