Greenland, a former blockbuster film slated for a summer 2020 release, but due to the COVID-19 pandemic, has been pushed to the Christmas season with action stars Gerard Butler (300) and Morena Baccarin (Firefly, Deadpool) leading the escape for survival against an incoming comet bound to hit Earth and destroy all life on the planet. It's damn good cinema with some great action sequences but is kept quite grounded in its dramatic tone that focuses on the characters rather than big-budget visual effects.

The film starts off by introducing the Garrity family during a party when the news breaks in, saying the comet that's been in the sky for a few days is actually headed to earth for a big impact. At this same moment, John Garrity (Butler) - a structural engineer, receives an automated phone call relaying that he and wife Allison (Baccarin) and their diabetic son Nathan have been selected to live in a bunker in another country and to rendevous at the planned coordinates immediately for travel. John thinks it's a phony call, but when he receives another one, as well as, when fragments of the comet impact earth to a devastating effect on television, he knows it's no joke. 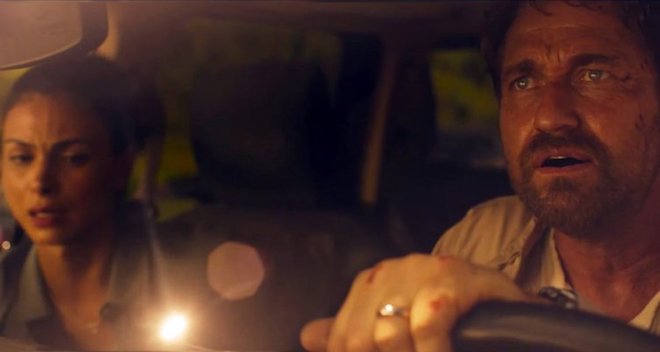 From here, panic sets in across the globe as the Garrity family try and make it to the determined location, avoiding looting, violence, and obstacles along their way. Director Ric Roman Waugh took his cues from Spielberg's version of War of the Worlds, which focused more on the inner-workings of a dysfunctional family dynamic and more intimate emotions of these people going through an end of the world scenario, rather than showcase big-budget action sequences after another as Independence Day does. This is where Greenland succeeds. John is not the typical main-eventer fighter like Butler has portrayed in other films, but rather he is a simple man and father who is trying to get his family to safety and make sure their healthy. Waugh showed this type of character-driven work in Snitch with Dwayne The Rock Johnson.

With all of the more subtle moments of fear and horror that plagues this family, including trying to avoid being killed by looters in a drug store, being kidnapped by crazy people, and missing their travel options at every turn, there are some big elements in the form of fragments of the comet crashing into Earth, but it's never overly done in a spectacle kind of way, but rather the film shows the reactions of the characters, which makes it all the more horrifying. 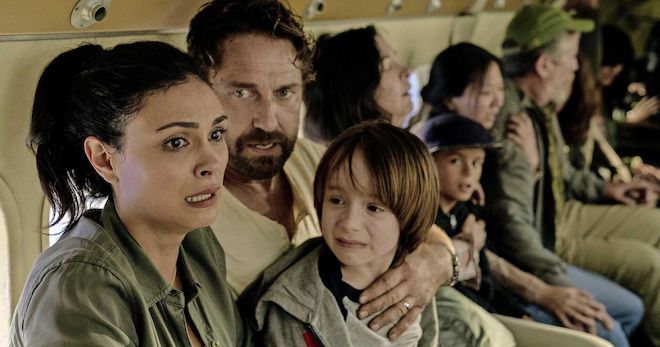 Butler and Baccarin turn in fantastic performances too, revealing their struggle with their failing marriage, but also caring for one another in this terrifying new world full of chaos and uncertainty. Waugh allows his camera and characters to navigate this emotional and suspenseful landscape with grace, never entering the path of the absurd, which is a breath of fresh air in the natural disaster movie realm. Greenland is a wonderful and original film that stands above the rest in this particular genre.

Greenland is a fun, entertaining disaster flick that has more heart and subtle moments of character development than most of the others in this arena. Gerard Butler and Morena Baccarin turn in great performances as well.

The film will release everywhere On Demand, including Amazon Prime on Dec. 18th.