A richly textured family drama sprinkled with bits of comedy and moments of all-too-relatable angst, Secrets & Lies stands as one of writer-director Mike Leigh's finest films. The story of a young black woman determined to meet her white birth mother resonates on a number of levels and brims with a rare authenticity, thanks to Leigh's masterful direction and the superb performances of Timothy Spall, Brenda Blethyn, Marianne Jean-Baptiste, and many others. A brand new 2K restoration, solid audio, and a few insightful extras distinguish Criterion's Blu-ray presentation of this deeply affecting motion picture that's just as entertaining and impactful today as it was 25 years ago. Highly Recommended.

Some films are so intimate, so emotionally raw and natural, the boundaries of the screen evaporate and the audience feels like a peeping tom spying on real life. Secrets & Lies is that kind of film. Writer-director Mike Leigh's mesmerizing interpersonal drama immerses us in the frustrated lives of a dysfunctional British family, but they might as well be the people next door. Although the situations they face may not be universal, the way they choose to confront or evade them is, and those sparks of recognition lend the film a marvelous immediacy that more than compensates for its minimal plot. Just watching these characters sit and talk is flat-out fascinating, but learning the actors improvised much of the dialogue makes us doubly appreciate the film's remarkable craftsmanship. From the moment this masterful work begins, it transfixes the viewer, and despite slow pacing, Secrets & Lies keeps us enthralled for almost two-and-a-half hours.

With a deft touch, Leigh mixes comedy and pathos - often in the same scene - as he tells the story of Hortense Cumberbatch (Marianne Jean-Baptiste), a sophisticated young black woman who decides to seek her birth mother after the death of her adoptive parents. An optometrist by trade, Hortense hopes to get a clear view of her own existence, but her fairy-tale vision becomes blurred when she discovers her mother, Cynthia Purley (Brenda Blethyn), is a pitiful, lower class white woman. Cynthia (who has no idea Hortense is black) initially rejects her sight unseen, but soon consents to a meeting, and after accepting the shocking reality of Hortense's race, the two develop a relationship that becomes more satisfying and nurturing than the one Cynthia shares with her other grown daughter, the petulant, rebellious Roxanne (Claire Rushbrook). 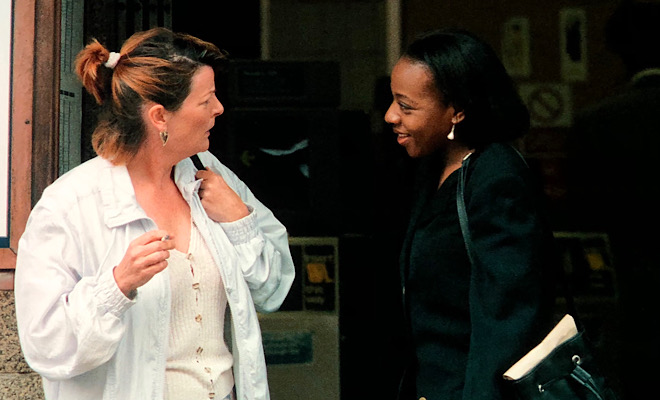 Meanwhile, Cynthia's brother, Maurice (Timothy Spall), a successful portrait photographer, tries to manage his own existence amid the wild mood swings of his uptight wife, Monica (Phyllis Logan). Maurice hopes to ease family friction by throwing a 21st birthday party for Roxanne, but when Cynthia shows up with Hortense, years of suppressed bitterness bubble over and brutally expose a lifetime of secrets and lies.

The film's provocative title masks a simple central theme - the pursuit of love and acceptance. When all is said and done, the characters want little else, yet they express that visceral desire in vastly different ways. The outspoken Cynthia wears her heart on her sleeve, and the circumstances of her sorry existence provoke numerous bouts of blubbering that evoke a mixture of sympathy, irritation, and embarrassment in those around her (as well as the audience). Maurice, on the other hand, spends his days coaxing smiles from his photographic subjects, but his gentle prodding proves futile in uniting the three stubborn women who rule his life. Like many Brits, he represses his emotions until they eat away at his insides - a quality his wife shares, except when her menstrual cycle transforms her into a crazed harpy. The introspective Hortense seems the most stable, but possesses far-too-rosy expectations regarding her assimilation into a family she knows nothing about…and who doesn't even know she exists. 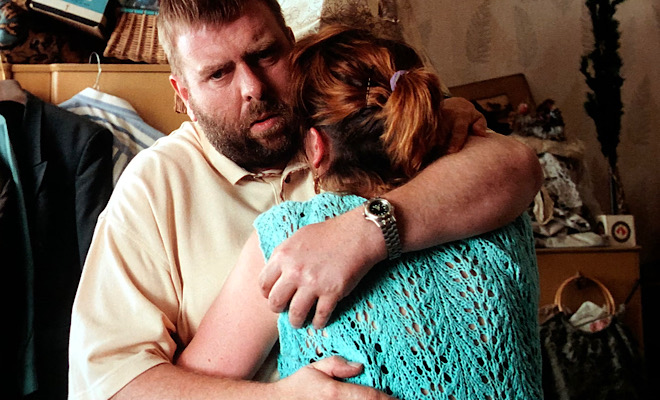 During filming, Leigh employed several creative methods to challenge his actors and heighten realism. He didn't allow Blethyn and Jean-Baptiste to meet until their characters did, and never told Blethyn that Jean-Baptiste was black. Whether such manipulations enhanced their performances remains open for debate, but what's indisputable is the superiority of their work. Rarely have I seen two more natural, spellbinding portrayals, both of which rightfully earned Oscar nominations. The needy, slovenly Cynthia is both heartbreaking and annoying, and Blethyn beautifully embodies both characteristics, challenging us to embrace this pathetic woman despite her multitude of faults. As the confused and conflicted Hortense, Jean-Baptiste exudes a subtle radiance and child-like innocence beneath her confident Yuppie exterior, and we admire her determination to pursue her heritage despite its unconventional elements.

In their scenes together, both women enjoy an uncanny rapport, and their depth of talent is never more evident than during a critical dialogue filmed in one sustained take lasting eight - yes, eight - minutes! Few directors would ever attempt (or consider) such a stagy presentation, but Blethyn and Jean-Baptiste are so riveting, Leigh pulls it off, and makes us barely aware of the take's duration or static nature. Watching it unfold, it's impossible not to believe we're witnessing the evolution of an actual relationship rather than two accomplished actresses performing a scene.

Leigh, who nabbed Oscar nods for his direction and screenplay, also draws equally realistic portrayals from the rest of his fine cast. Spall especially shines as the man forever caught in the middle, filing an understated, heartfelt performance that engenders enormous sympathy. As his brittle, resentful wife, Logan plays a difficult part with aplomb, and though the always marvelous Lesley Manville only appears in a single scene early in the film as a sympathetic social worker, she makes an indelible impression, adding richness and humanity to a ho-hum bureaucratic role.

Leigh's directorial style is devoid of flashy technique, yet Secrets & Lies still enjoys a lovely cinematic look. The lengthy takes heighten the sense of truth and forge us deeper into the characters' heads, while the urban London locations lend the film an edgy documentary feel. Some have likened Leigh to Woody Allen or Ingmar Bergman, but Secrets & Lies lacks the affectations and idiosyncrasies that often mark the works of those legendary directors. With little flourish, Leigh creates a fascinating film that's straightforward, funny, often tough, but immensely satisfying and ultimately uplifting. Just like life. 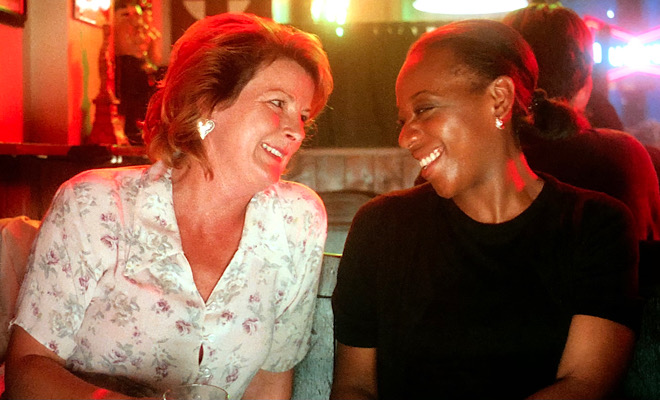 Vital Disc Stats: The Blu-ray
Secrets & Lies arrives on Blu-ray pacakged in a standard Criterion case. A 12-page fold-out booklet that features an essay by Criterion curatorial director Ashley Clark, a few color scene shots, a cast and crew listing, and transfer notes is tucked inside the fron cover. Video codec is 1080p/AVC MPEG-4 and audio is Dolby 2.0 Surround. Once the disc is inserted into the player, the static menu with music immediately pops up; no previews or promos precede it.

You might expect an independent film from 1996 to look a little ragged, but Criterion's gorgeous 2K digital restoration, which was created from the 35 mm original camera negative and color-graded by Leigh and director of photography Dick Page, makes Secrets & Lies look like it was produced yesterday. Deep, rich hues and astounding clarity distinguish the terrific 1080p/AVC MPEG-4 transfer that also features superior contrast and a natural but not overwhelming grain structure that preserves the feel of film. A relationship drama relies on a feeling of intimacy, and the razor-sharp close-ups plunge us so completely into the characters' lives, it sometimes feels as if we're all in the same room.

Bursts of vibrant color punch up the muted palette, flesh tones remain stable and appear natural throughout, good shadow delineation keeps crush at bay, and just a few errant specks dot the pristine print. The 2005 DVD sports an excellent transfer as well, but this top-notch effort from Criterion eclipses it and definitely rates an upgrade.

According to the liner notes, "The original 2.0 surround soundtrack was remastered from a 35 mm magnetic track...Please be sure to enable Dolby Pro Logic decoding on your receiver to properly play the Dolby 2.0 surround soundtrack." The naturalistic audio plays nicely across the front speakers, allowing subtle city noises to fill the room. Some slight stereo separation adds some aural interest, and all the pregnant silences are devoid of any surface noise. Unfortunately, the heavy British accents can make dialogue a bit hard to decipher, but levels are strong and conversations come through cleanly. The understated score by Andrew Dickson overwhelms at times, but enjoys good tonal depth and presence. A wide dynamic scale handles all of its highs and lows without any distortion, and sonic accents like ringing telephones and the clicking camera shutter are crisp and distinct.

The 2005 DVD only included a trailer, so all the supplements Criterion provides are welcome indeed! Though the selection isn't extensive, all the interviews are worth watching.

A multi-Oscar nominee, receiving nods for Best Picture, Actress, Supporting Actress, Director, and Original Screenplay, Secrets & Lies paints a gallery of riveting character portraits as it explores how the ties that bind can also rip us apart. Mike Leigh takes the ordinary and makes it extraordinary in a richly rewarding film that still amazes and delights a quarter century after its initial release. Criterion's new 2K restoration spruces up this enduring family drama, and the addition of a few insightful and enlightening supplements sweeten the attractive Blu-ray presentation. Highly Recommended.