Room for One More

Cary Grant and Betsy Drake (his real-life wife at the time) keep making Room for One More in this syrupy family comedy about foster parenting and adoption. Though well-intentioned and occasionally amusing, the film addresses a substantive issue within a sitcom framework, and the result is a trite, uneven, often cloying tale that even Grant's considerable charm and dry wit can't sufficiently elevate. Thankfully, Warner Archive's first-rate video and audio transfers considerably brighten up the experience, and make this little-known, breezy, and innocuous movie worth a look for Grant aficionados.

Cheaper by the Dozen, a heartwarming comedy about a real-life family with 12 children, was a big hit for 20th Century-Fox in 1950, so it's not surprising Warner Bros sought to duplicate that success by fashioning a similar film about a bloated brood a year later. Room for One More, an adaptation of Anna Perrott Rose's popular autobiography, reduces the number of kids by half, but stresses many of the same homespun points. With gentle humor, plenty of schmaltz, and a bit of preaching, director Norman Taurog's film sings the praises of foster parenting, but the idyllic depiction can be tough to swallow and the sitcom-like script often leaves a stale, syrupy aftertaste.

Cary Grant stars with his real-life wife Betsy Drake in this breezy trifle that was surely designed to capitalize on their seemingly blissful domestic partnership. (The couple tied the knot two years earlier after co-starring in the romantic comedy Every Girl Should Be Married and divorced 11 years later in 1962.) Though appealing, elegant, and sincere, Drake's decided girl-next-door quality lends her a drabness that seems to sap Grant's energy. Vibrant, sassy women like Katharine Hepburn, Irene Dunne, and Rosalind Russell bring out the best in Grant, and Drake just can't muster the same level of charm and allure.

Of course, the material is hardly The Philadelphia Story, The Awful Truth, or His Girl Friday. Room for One More can't decide whether it's a comedy or drama, and as a result, the screenplay by Jack Rose and Melville Shavelson peddles forced comedy and trite drama. One minute the film is a sitcom, the next it's a tearjerker, and occasionally it's a statistic-laden public service announcement extolling the virtues of and bemoaning the disinterest surrounding foster parenting and adoption in America. 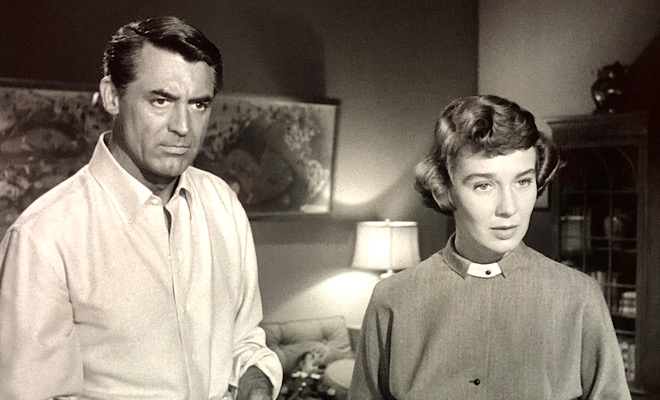 As the film opens, a group of housewives tour an orphanage run by Miss Kenyon (Lurene Tuttle), who implores the women to consider adopting one of the neglected older children who desperately need a home, stability, and love. Most of the ladies politely demur, but Anna Rose (Drake), a mother hen with three kids who can't resist taking in stray animals, is moved by Miss Kenyon's impassioned plea. Yet before she can run the idea by her beleaguered husband George (Grant), who's been looking forward to spending more time with his wife now that their kids are more self-sufficient, Miss Kenyon arrives on their doorstep with troubled 13-year-old Jane (Iris Mann) in tow.

The cornered George reluctantly agrees to a two-week trial, but assimilating the angry, defiant, insecure adolescent into the family takes some doing. Nevertheless, the two-week trial leads to a longer-term arrangement and leads Anna to take in another needy child. The sullen, withdrawn Jimmy-John (Clifford Tatum Jr.) survived polio, but wears braces on both legs and has difficulty forming attachments. After a similarly rocky start, George and Anna help the boy adjust to and accept his disability, and under their loving tutelage, he grows physically and emotionally by leaps and bounds.

Foster parenting is no joke, and to its credit, Room for One More doesn't treat it as such, but the film also paints an overly rosy portrait of the topic. Miss Kenyon describes Jane as a girl who's endured "year after year of hell." She's supposedly been beaten, abused, and even considered suicide. Such emotional wounds often take years, if not a lifetime, to heal, but after two weeks with the Roses, Jane becomes the most well-adjusted, personable, mature, and carefree child on Earth. The same is true with Jimmy-John, who turns on a dime after a couple of days at the beach with his adopted family. Annie Sullivan may have transformed Helen Keller, but if you believe Room for One More, the real miracle workers are George and Anna Rose. 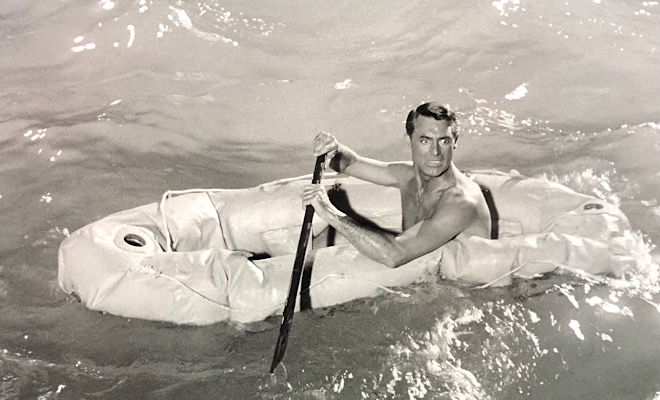 Grant tries his best to recreate the put-upon family man he portrayed so memorably in Mr. Blandings Builds His Dream House a few years earlier, but the script isn't nearly as clever, his role is only half as interesting, and Betsy Drake is no Myrna Loy. Grant's nonplussed expressions and droll line readings enliven the trite, predictable tale, as do bits of domestic comedy and a couple of moments that allow Grant to show off his penchant for slapstick, but the laughs aren't big enough to temper the saccharine overtones that weigh down the film.

Drake's one-note performance doesn't ring true - have you ever met a mother of five who never, ever raises her voice? - and the juvenile performers either shamelessly overact or lack any distinguishing qualities. The one glorious exception is five-year-old George Winslow, who makes his film debut here and would soon earn the nickname Foghorn for his incredibly low voice. The precocious, often adorable Winslow slightly resembles Macaulay Culkin and is probably best remembered for helping Marilyn Monroe wriggle out of a porthole window in Gentlemen Prefer Blondes the following year. It's tough to steal a scene from Cary Grant, but Winslow does just that on a couple of occasions, and watching him do it is definitely one of the movie's highlights.

Despite its good intentions and important message, Room for One More remains a minor entry in Grant's film canon, possibly because Grant made a far better film about adoption a decade earlier - George Stevens' Penny Serenade with Irene Dunne. Room for One More lacks the depth and emotion of that classic tearjerker, but it does depict the importance of a strong, supportive, and loving family with genuine warmth. And there's a lot to be said for that. 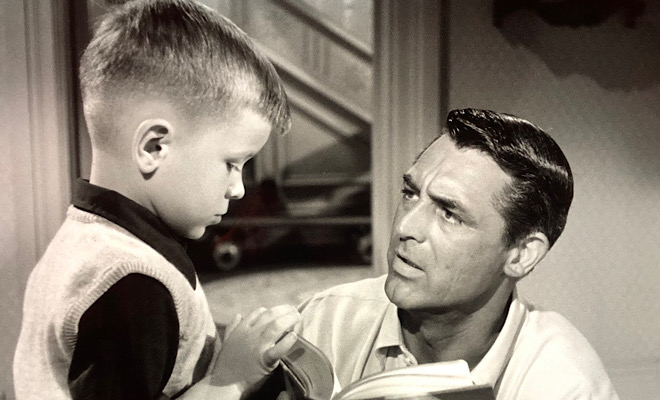 Vital Disc Stats: The Blu-ray
Room for One More arrives on Blu-ray packaged in a standard case. Video codec is 1080p/AVC MPEG-4 and audio is DTS-HD Master Audio 2.0 mono. Once the disc is inserted in the player, the static menu without music immediately pops up; no previews or promos precede it.

A new master culled from the best surviving elements yields a stunning 1080p/AVC MPEG-4 transfer that makes Room for One More look like a freshly minted movie. Faint yet natural grain preserves the feel of celluloid, while terrific clarity and contrast and beautifully graded grays combine to produce a crystalline picture that bursts with fine details. Rich, lustrous blacks anchor the image, the bright white snow during the winter scenes appears well defined, excellent shadow delineation keeps crush at bay, and costume textures come through cleanly. I don't usually mention flesh tones when reviewing a black-and-white movie, but Grant's omnipresent tan is so vivid it bears mentioning. His close-ups are arresting as well and highlight his olive skin tone, slick black hair, and matinee idol looks. Though Room for One More was most likely a mundane assignment for future Oscar-winning cinematographer Robert Burks, who would photograph a dozen Alfred Hitchcock movies over the course of his distinguished career, his elegant stamp is evident throughout, and this top-notch transfer faithfully honors his stellar work.

The DTS-HD Master Audio 2.0 mono track supplies vibrant sound that nicely punctuates the on-screen action. Sonic accents like honking horns, crying babies, and shattering glass are crisp, as are subtle atmospherics like the crashing waves at the seashore and activity on the playground. A wide dynamic scale handles all the highs and lows of Max Steiner's surprisingly understated music score without any distortion, all the dialogue is clear and easy to comprehend, and no age-related hiss, pops, or crackle intrude. Room for One More is a rather quiet film, but this solid track renders the audio quite well.

Just a few extras adorn the disc. Unfortunately, the radio adaptation of Room for One More that allowed Grant to reprise his role is not included.

A good-natured, heartwarming family comedy that mixes laughs with schmaltz, Room for One More may paint an overly rosy portrait of foster parenting, but still hammers home sober facts about the issue. Cary Grant and Betsy Drake, his real-life wife at the time, do what they can with the sitcom-like script that explores the complications that develop when a family of five expands to seven...and adopts a couple of stray animals, too. High-quality video and audio transfers distinguish Warner Archive's Blu-ray presentation, which also contains a couple of beautifully restored vintage cartoons in high definition. Though not one of actor's best films, Room for One More is certainly worth a look if you're a Grant groupie.