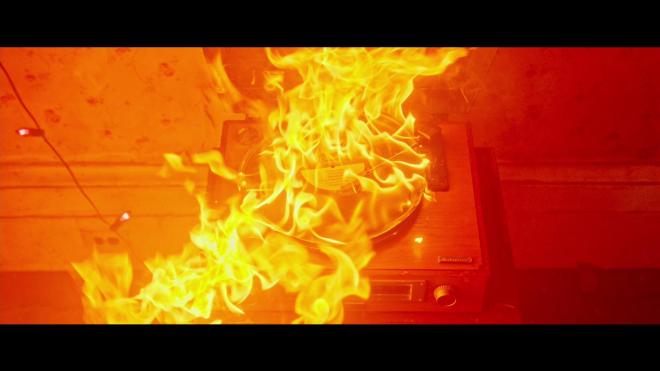 Art imitates art and life imitates art in Jay Baruchel’s adaptation of the Justin Gray and Jimmy Palmiotti graphic novel Random Acts of Violence. Starring Jesse Williams as a horror comic book creator forced to face his creation when someone starts to mimic the grizzly and depraved deaths in his pages. A loose adaptation, the film offers some good jumps with stylish imagery but is frightfully short leaving the final product a bit adrift. RLJE delivers an excellent Blu-ray with a solid A/V presentation and some decent bonus features. Worth A Look

Comic writer/artist Todd (Jesse Williams) and his publisher Ezra (Jay Baruchel) are the brilliant minds behind the hit “Slasherman” comic series depicting fictitious events surrounding the real-life I-90 killer that murdered people decades before. Now that the comic series is coming to a close, Todd, Ezra, Todd’s girlfriend Kathy (Jordana Brewster), and their assistant Aurora (Niamh Wilson) are taking a road trip media tour on their way to Comic-Con. As Todd faces fans, critics, and his own personal history - someone is taking the Slasherman character too far unleashing a new reign of terror staging grotesque murders ripped from the pages of the comic. 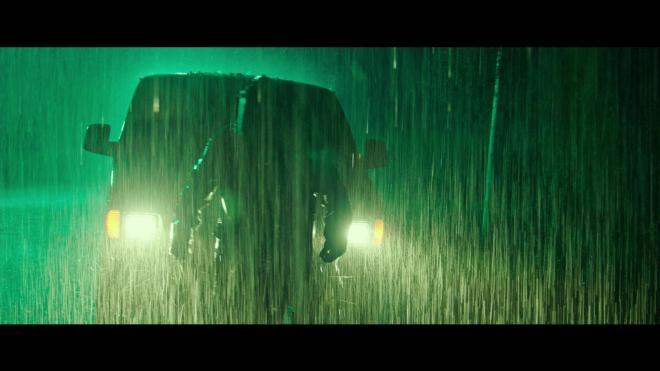 Based on the one-off 2010 graphic novel by Jimmy Palmiotti and Justin Gray, Random Acts of Violence works to examine the world of True Crime entertainment and the glorification of violence and the monsters who committed horrible crimes. It’s been a long time since I read it, and frustratingly I can’t find my signed copy anywhere in my collection so I’m working against memory. Jay Baruchel’s film does hold to those themes, but its approach is a bit different. For starters, the cast of the film is larger. In the comic, it was just Todd and Ezra on the road. With Kathy and Aurora riding along in the film, you get more of a diverse dynamic to the horror elements as they unfold so it’s not just a dude show. With Kathy in the car instead of a random insert as she was in the comic, it gives Todd some sense of conscience and ultimately motivation as Slasherman returns.

I’m not really a fan of films that become slavish page-for-page adaptations; I like a little creativity to make the work actually cinematic instead of being a photocopy. I appreciated the attention to detail in Sin City, but it also felt kind of soulless to me with the only really interesting moment was the segment Quintin Tarrantino directed with Clive Owen. Baruchel brings some creativity to the mix. It’s certainly a gnarly horror film updated for more modern creepy creations than the simple dismemberments of the original comic, but it's effective with some good shocks and ample gore. They also made some big changes with the nature of Slasherman and the killer that I won’t get into here because it’s some serious spoiler territory.

One of the best scenes in the film is when Jesse Williams’ Todd is confronted face to face by a radio DJ. He’s there to promote the final issue and his road tour and he thinks he’s got a fan in the room, but the guy has an ulterior motive and puts Todd in the hot seat. It’s a great examination of True Crime and those content creators essentially profiting off ruined lives. Don’t get me wrong, I think there are some genuinely great contributors to the genre - The Last Podcast On the Left team is adept at balancing the entertaining interest in the killers and the horrible effects on the victims. Others out there feel excruciatingly exploitive - I can’t watch most of the crap that Netlfix delivers for that reason.

As much as I did enjoy this one I do feel that there are some missed opportunities. One of the frustrating things is the film dances around Todd’s childhood as a witness and survivor of the I-90 killer. I remember the comic being much more straightforward with that aspect. By being upfront with it, it makes the creation of the Slasherman comic cathartic where in the movie, it’s kind of saved for a big reveal that’s just not as impactful. This film is also much more on the nose about the nature and identity of the killer. In the comic, there was some ambiguity about the person either being inspired by the comic and therefore a copycat or they’re the actual killer goaded to come out of retirement for one last spree.

The cast is solid and works well with the material. Jesse Williams holds the lead as Todd showcasing a great range. His character struggles with past events while reconciling his future once his work is done. Jordana Brewster isn’t any stranger to horror movies after her turn in Texas Chainsaw Massacre: The Beginning and she's in fine form here. While working behind and in front of the camera, Jay Baruchel is solid as Todd’s friend and publisher, but he also doesn’t overstep and take center stage. Also worth noting is Simon Northwood’s turn as our masked killer. He doesn’t get much to do without that welder’s mask over his face, but he brings a creepy intensity to part.

The length of the film is also an oddity. I don’t mind a movie being timely with its delivery, but at 80-minutes it redefines the term “lean.” Just when the film feels like it’s moving into the middle of the second act, where things are ramping up suspense and momentum with our characters floundering to figure out what to do, it crashes right into the final act. You’re left feeling like you blinked and somehow missed fifteen minutes of the film. It was so sudden I actually had to double-check and make sure I didn’t accidentally hit the chapter skip on my remote. That isn’t to say it isn’t an interesting end - it is - but its journey to that conclusion is a bit jerky.

Overall, Random Acts of Violence is a decently entertaining movie. I dug the comic-infused flourishes with hyper-stylized colors that made some scenes look like an old E.C. monster comics with sharp greens, reds, and yellows. A also loved the dips into animation to look at the internal issues Todd faces creatively and personally. Visually, it’s an impressive convergence of different mediums with comics, live-action, and animation. As Jay Baruchel’s second feature as a director, it’s solid. He has an eye for horror and building tension within a scene, but a better feel for pacing would have smoothed this one out. A slow burn waiting for something to happen is often far more terrifying than when something actually happens.

Random Acts of Violence arrives on Blu-ray from Shudder and RLJE. Pressed on a Region A BD-25 disc, the disc loads to a trailer for the Shudder streaming service before arriving at an animated main menu with traditional navigation options.

Shot digitally and finished with a 4K digital intermediate Random Acts of Violence enjoys an often beautiful 1080p 2.38:1 transfer with only a couple of touchy spots. From the get-go, the image is pretty hyper-stylized so some detail levels can fluctuate depending on how stylish and processed the image is. Todd’s flashbacks tend to be a bit softer with a more diffused appearance, but the main feature looks terrific with intensely detailed facial features, clothing patterns, and production design. There are some really impressive gore effects throughout that get plenty of screentime.

Generally, colors are on point with bold natural primaries and healthy flesh tones, but throughout there are several sequences where colors are more flashy and splashy bathing in bright neon greens or reds to exude that comic book feel. Some of this coloring looked to have been shot live in-camera, and they look great. Other sequences look like a color filter was added later and that’s where some detail can be lost and a few compression artifacts creep in. There’s a bit of video noise here and there, but nothing too serious. If this had been given a BD-50 disc and some more room to roam, I’m sure those small nitpicks wouldn’t be an issue.

This film also scores a strong DTS-HD MA 5.1 mix that hits with a lot of oomph and presence. LFE was a nice companion giving a low guttural rumble with the score and some of the sound design to amp up that sense of dread. Dialog is clean and clear throughout without issues. Scoring hits the right notes to push that suspense and action. Even though much of the film is the cast in the car on the highway, there’s a nice sense of atmosphere to their roadside travels. One of the creepiest scenes is when they stop at a motel for the night and the sounds of other residents, cars passing, televisions - all pepper around the soundscape for a nicely creepy vibe. All around a solid mix.

Bonus features for this one aren’t the biggest package - but we get some quality stuff that’s far better than the usual EPK drek that passes for extra features these days. The interview with Baruchel is the main highlight with the rest of the materials less significant. The action sequence breakdown is a pretty cool behind-the-scenes look at how they staged everything.

When I heard that Random Acts of Violence was being adapted into a movie, I was excited, it was an interesting read when it landed in my in-box at my local comic shop and could make a cool movie. While it makes a number of changes to the source material, they’re the kinds of changes that work to make it work better as a movie instead of a panel-for-panel photocopy. It’s not perfect, I wanted more out of it, but after that 80-minutes was up I was entertained.

RLJE delivers Random Acts of Violence to Blu-ray with a solid A/V presentation and a decent assortment of bonus features. After being out of print for a while, I now want to go back and reread this on - especially since I can’t find my copy anywhere. If you enjoyed the movie, give the comic a shot. Worth A Look.