Diane Lane and Kevin Costner take a break from raising the son of Krypton to star in the unsettling and heartfelt family-thriller Let Him Go from writer/director Thomas Bezucha. The film plays closer to a contemporary western set in the 1960s and while the journey these characters travel is very familiar, the excellent performances and steady direction set this one above the bar. This solid film earns a respectable Blu-ray release with a dependable A/V presentation. Sadly bonus features are sparse and lack any real depth. Overall, as one of the better new movies of 2020, it shouldn't be missed. Recommended

George and Margaret Blackledge (Kevin Costner and Diane Lane) have lost their son to a riding accident. Their widowed daughter in law Lorna (Kayli Carter) with their grandson Jimmy stands in front of Donnie Weboy (Will Brittain) to be remarried and moved off their Montana ranch. While they knew Lorna would have to move on - Margaret and George didn't expect them to disappear. With no other options, they must set out to find their only grandson and face the Weboy clan head and their violent matriarch Blanche (Lesley Manville) head-on. 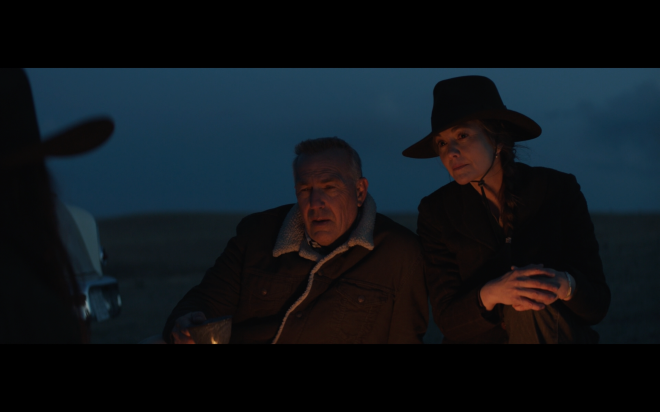 The Family Tragedy Drama is a dime-a-dozen genre. Most films that enter this realm rarely rise above a Lifetime movie or an episode of This Is Us. They steep in the lost tragedy aiming for poignancy through redundant profound expressions of sorrow that only serve for Oscar-reel clickbait. Where Let Him Go precariously skirts that genre; it has a sense of direction allowing the characters to move forward and heal rather than wallow in a pool of misery for two hours. That direction forward just happens to be in the form of a modern-styled western/thriller.

Based on the novel of the same name, screenwriter/director Thomas Bezucha keeps the attention focused on George and Margaret and their journey to heal after the death of their son by reclaiming the family they have left. If this was any other movie, that grandson would be a drug addict or living on the street somewhere and it would be a trite repetitive affair. We've seen that movie. Let Him Go working as a contemporary western/thriller gives the story a sense of urgency and a reason for the Blackledges to do what they're doing giving the work a fresh feel. Things get genuinely creepy and physically unsettling once they find the Weboy clan.

And that's where Lesley Manville and Jeffrey Donovan come in and practically steal the movie. They are just damn creepy with Manville playing the perfect evil step-mother - or step-grandmother in this case - and Donovan as Donnie's cousin. Obviously, you expect tensions between families in this instance, but there's a sinister side to the family that you barely get a taste for when the Blackledge's start their search. The first time they meet face to face is some of the most uncomfortable tension I've felt from a movie in a long time. Meeting the Weboys is like shaking hands with a rattlesnake - you're going to get bit but you just don't know when.

As much as I did really enjoy this film and appreciate what it was going for, there's a constant sense of familiarity to it. See enough movies of this sort and there just isn't any mystery to the plot. You know pretty early on things are going to go south, you just don't know how bad. Setups for confrontations are obvious to the point you'll be telling yourself, "and this is going to happen next." So it's to that point that I do have to credit Bezucha again for balancing this film teetering along that line of being too familiar while also managing to surprise and horrify the audience.

Some may find the pacing of this movie on the slow side, and I get that. It does take its time to get to where it wants to go, but that slowness is necessary to appreciate the last 45 minutes of the film. The first hour is almost entirely set up giving you what "normal" feels like for Margaret and George in the wake of their son's death. The moment they leave home you know they won't be the same people when they come back regardless of how things turn out. It's a hell of a show. Let Him Go may not be perfect, but it's a damn good thriller well worth checking out.

Let Him Go arrives on Blu-ray in a two-disc Blu-ray + DVD + digital release from Universal. Pressed on a BD-50 disc, the discs are housed in a standard Blu-ray case with an identical slipcover. The disc loads to skippable previews for other Universal releases before arriving at a static image main menu with the bonus features panel along the right side.

Let Him Go enjoys a very good 2.39:1 1080p transfer. It's not perfect mind you - there are some cooked in issues that hold this one back, but there's a lot of beauty to show off. Close up details in faces, clothing, and the impressive production design come through beautifully. The stark contrast between the Blackledge and Weboy homes is instantly appreciable and offers a terrific visual aesthetic for each family's mentality. Many of the scenic location shots are spectacular - and some aren't. Given the era the filmmakers are trying to recreate, there are some scenes that are much softer than others with odd points of focus.

Some digital fakery is pretty obvious in places. Black levels are also a bit problematic. Some night scenes have a lot of macroblocking - I tried this on two different setups and my Oppo handled them a bit better, but my Samsung office setup was much more chunky looking. Both exhibited a fair bit of digital noise and image flatness that just looked odd compared to other stretches. A scene in a hospital just before the final act is a notable example. I couldn't find any information about the final digital intermediate, but I have doubts this was sourced from a native 4K final DI. Overall this is a very good looking transfer, again, it's just got some cooked in issues holding it back.

Let Him Go enjoys a clean and engaging DTS-HD MA 7.1 audio mix. This isn't the most dynamic movie to use such an expansive sound design. Except for a handful of sequences, there's not much full-on "surround" action going on. Most of the film is very front/center focused conversations leaving the remaining channels to set up the atmospherics in very subtle ways. A scene in a motel room is very dynamic, the first time everyone meets at the Weboy house for dinner offers plenty of tension-fueled sound design with forks and knives scraping plates along the sides and rears to amp up the creepiness. Scoring by Michael Giacchino is beautiful stuff. I've always liked his music, but pulled away from the big blockbusters he usually works on this is a refreshing piece of work. Levels are spot on without the need to adjust.

Bonus features for this film are pretty much non-starters for me. You're looking at three EPK features that hardly go into any depth beyond the expected talking-head "isn't it great to be working with so-and-so" material. The interviews with Kevin Costner are nice if only they confirm he doesn't always have to talk from the bottom of his neck - his normal voice does still exist! All in all, you don't even have fifteen minutes of bonus features here.

I really enjoyed Let Him Go. I wouldn't saddle up to this contemporary western thriller and call it one of the "Best of 2020" - but it was very good and you should check it out. I feel like my response to this movie was a case of over-hype. I love this sort of movie, I love a slow-burn thriller and I especially like movies that act as non-traditional westerns, but I always felt ahead of this film. How scenes played out was a surprise, but I also felt like I knew what each next scene was essentially going to be. It's the performances from Lane, Costner, and especially Manville that make this film as good as it is. Without them, I feel like this project wouldn't be as nearly as successful as it is.

Universal Studios turns out a decent Blu-ray release, the video transfer has some issues holding it back from greatness but it's still very good and the audio mix, even if it's not the most active track ever is solid and serves the nature of the film. Bonus features are pretty pointless. At the end of the day, Let Him Go is definitely worth the time you give it. I'm looking forward to revisiting it down the road a spell. Recommended