Legendary filmmaker Henry Hathaway turns in his penultimate film Shoot Out starring Gregory Peck as a former bank robber looking to settle the score with his old partner but stuck taking care of a small child. Similar in spirit and feel to True Grit, this is a somber friendly Western with clean characters, great action, and another terrific turn from Gregory Peck. With a solid A/V presentation - this is another entertaining Western finding its home on Blu-ray thanks to KLSC. Recommended.

After spending the last several years in prison for a bank robbery gone wrong that left him shot in the back, Clay Lomax (Gregory Peck) is out and ready to settle the score. Expecting an old flame to meet him with the cash he needs to take care of business, he’s instead met by a 7-year-old girl (Dawn Lyn) holding a note and his money. Now forced to care for the child, Clay’s old partner has hired three young toughs out to make a name for themselves to dog his every move. 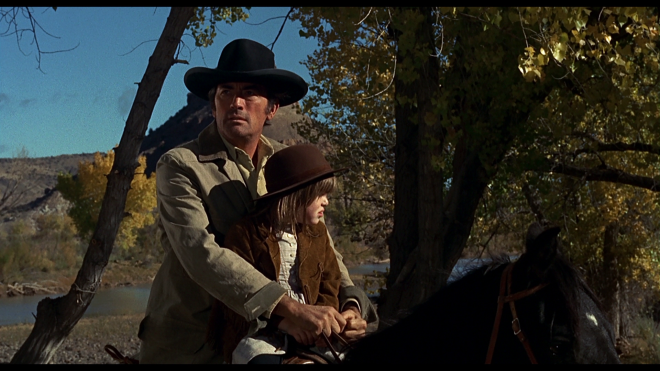 If you didn’t know when this was made, you could easily mistake that Shoot Out was in the can before True Grit. Henry Hathaway has always had a classic style approach to his Westerns; he never fell into the popular gritty revisionist angle that dominated the genre through the late ‘60s and ‘70s, but he had a strong sense of character, action, and drama. By the time his career was winding down, his films became a bit softer, a bit more whimsical with a heart and this film fits right in that artery.

It’s here that Shoot Out actually feels like True Grit-lite. If the Oscar-winning turn from The Duke hadn’t been made, this film could have been the one people remember so fondly and possibly have been remade by the Coen Brothers. But it didn’t turn out that way. You can almost forgive Hathaway and company for wanting to recapture that magic in the bottle, but this is an on-the-nose effort despite its best qualities.

But - that doesn’t make Shoot Out a bad film. If familiarity really is the worst negative you can slap a movie with, that’s not altogether bad. This may not be the most special film or even Hathaway and Gregory Peck’s best efforts respectively, but it’s solid. I found myself quickly enjoying the tone and pace this show offered. As I mentioned this film was bucking the revisionist trend. When the Italian market was saturating movie screens and guys like Eastwood were coming up, Shoot Out is a step back to the old glory days of Hollywood. Good guys are good. Bad guys are bad. And the film works!

While this was made during Gregory Peck’s notable career slump, he’s great as the weary revenge-driven Clay. He has a singular mission in mind for years but hiccups in the plan keep coming up and they force him to reevaluate. All of a sudden the child that was a roadblock becomes a reason for moving away from his main goal. That’s where this film finds its strongest legs - Clay and little Decky becoming their own family whether or not they are actually related by blood. As their journey continues, the need for Clay’s revenge diminishes. It’s when he’s found the chance for a better life that circumstances out of his control compel him to push forward.

This isn’t to say this is a perfect Western or an absolutely “great” film. I really enjoyed it and will revisit it again, but it’s got some issues holding it back. While being a classically styled Western, it can be hammy at times; the three hunters on Clay’s trail being the principal issue there. We get it they’re bad, but they dial-up “bad” to 11 in a movie with a temperament at around a 6. On a technical side, there are a number of odd shots with the boom mic clearly in frame making you wonder who was checking the camera between takes. Once or twice is one thing, but four or five times? The middle section can meander a bit longer than necessary and a third act love interest twist is awfully convenient and slipshod. Nitpicks maybe, but notable ones.

Ultimately what makes this movie work is Peck and his pint-sized companion Dawn Lyn. The film tries to be subtle with the notion that the girl is supposed to be his daughter but the way Peck plays it he’s certain deep in his bones even if he doesn't outwardly admit it. He’s on a quest for revenge but now he has a duty that’s larger than that simple quest. He’s an ex-con and a saddle tramp, so fatherhood isn’t the suit that naturally fits him, but gradually he eases into it, and their relationship blossoms. It’s the father/daughter dynamic that makes this movie harken back to Peck’s glory days in something like To Kill A Mockingbird with his natural grand paternal grace.

Years ago I put this on while working Hollywood Video during my regular morning shift when few people came in. I didn’t get to pay much attention while filing away videos and checking out the oddball early bird customers, but it seemed nice and I always wanted to give it another go. Now thanks to KLSC bringing it to Blu-ray, I got to sit down and enjoy this one properly. It was a fun watch. Not the greatest film ever made, but a nice one to sit back with.

Vital Disc Stats: The Blu-ray
Shoot Out comes to Blu-ray courtesy of Kino Lorber Studio Classics. Pressed on a Region A BD-50 disc, the disc is housed in a standard case and loads to a static image main menu. 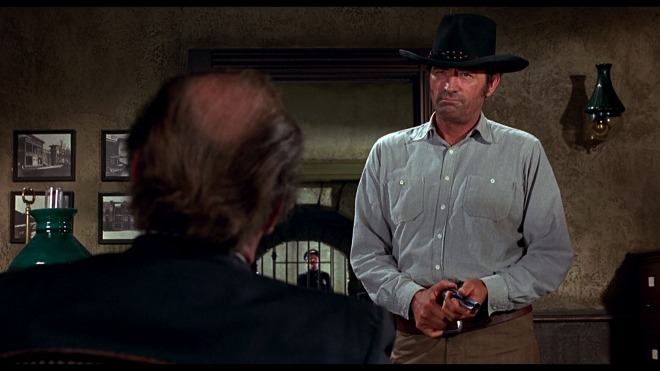 While not indicated anywhere, Shoot Out appears to enjoy a fairly recent scan for this 1.85:1 transfer. Speckling is apparent for some sequences, notably around optical transitions, and some of the day-for-night photography is a little spotty but that’s the worst of it. Film grain is apparent throughout leading to some pleasant detail levels. Facial features, clothing, and the film’s scenic locations often look fantastic. Colors are bold with rich primaries. Black levels are strong throughout giving the image desired depth - but again those day-for-night shots knock it back a bit softening and flattening the image. All in all a very pleasing release. 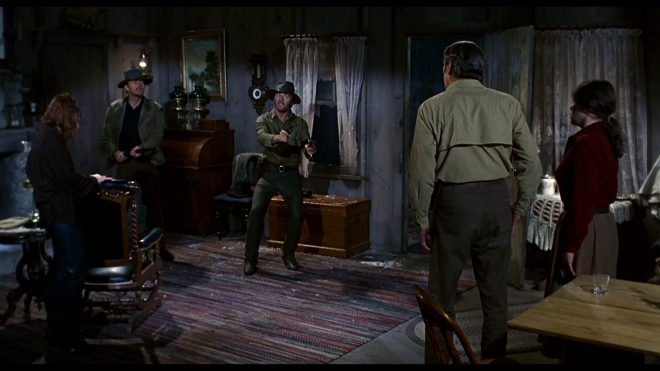 Shoot Out arrives'; with a respectable English DTS-HD MA 2.0 audio track. While not the strongest track, it gets the workload done. The dialog is clear and scoring is strong. Sound effects can be a bit up and down with some something through perfectly while others are a bit stilted. Inside scenes work the best where open country sequences can feel a bit canned. Small nitpicks, but you can feel some of the re-recording efforts. Levels are spot on without issues. 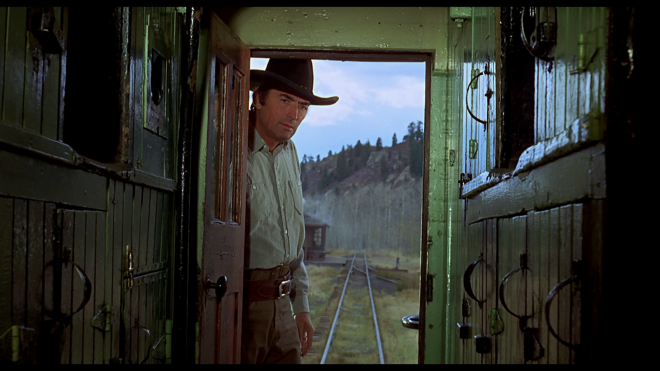 Shoot Out isn’t stacked to the gills with bonus features but the Nick Pinkerton audio commentary is certainly a worthwhile listen providing insight into the film with some production tidbits. After that, the package is rounded out by KLSC’s standard collection of trailers

Shoot Out was intended as a rebound movie for Gregory Peck and a return to form for director Henry Hathaway. Perhaps too familiar with Hathaway's very recent True Grit, this film was a bomb at the box office and with the critics who were looking for something special. Time has worked in this film's favor making it due for a reevaluation. While not the greatest Western ever, it works pretty well and Peck stands tall in another impressive lead. It’s never boring and you certainly get your entertainment value!

Kino Lorber Studio Classics brings Shoot Out to Blu-ray in fine form offering up a solid A/V presentation rounded off with a fine audio commentary to listen to. Recommended.