Big burly Rock Hudson and suave snarky Dean Martin headline legendary director George Seaton’s final film, Showdown. Seaton doesn’t always feel comfortable with the genre while Hudson and Martin do their best to beef up the character drama and add some urgency to the show. Not the best or greatest, but it passes the time. Kino Lorber Studio Classics brings this 1974 Western to Blu-ray with a fine A/V presentation. Worth A Look

Chuck (Rock Hudson) and Billy (Dean Martin) have known each other since they were children. They shared the dream of scraping together enough cash and starting their own ranch and be truly free men. But the years passed, they went their own ways, and the dream faded. Now they find themselves reunited on opposite sides of the law with Billy on the run for a train robbery and possible murder with Chuck the county Sheriff tasked with bringing his old friend to justice. 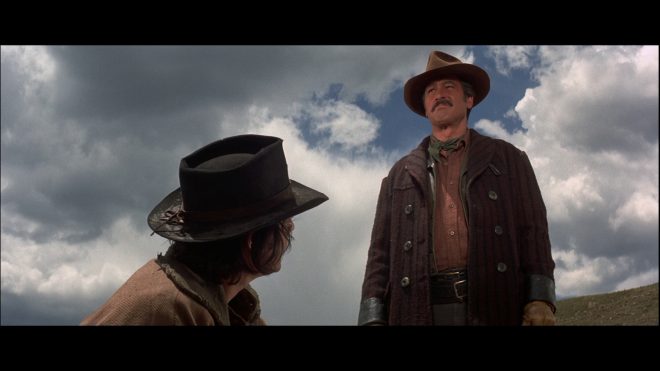 George Seaton was one of the best writers and directors to come out of classic Hollywood. Credited for writing five screenplays that went on to earn Best Picture nominations (Miracle on 34th Street and The Wizard of Oz among others) - the man knew cinematic story structure. As his first and only western (and final film) Showdown is a bit of a mess. Not an unwatchable one, but it never establishes a consistent tone. From the opening train robbery, you’d assume you’re in for a rollicking jaunty comedy. By the time the credits close you’re sitting with a somber gritty revisionist Western. It’s a bit of whiplash. Seaton’s direction really only works on a scene-by-scene basis. Each scene is great unto itself but pushed together they don’t all stick cohesively for a full film.

Through it all, Rock Hudson and Dean Martin hold the picture together doing what they do best. While Hudson could play comedy, he sticks to his stock “man of few words” reluctant hero. And Dino could hold his own with dramatics, but he’s dialing into his trade comedic everyman - fast with a gun but faster with a joke. This could have been a great way to showcase how the two friends drifted apart to opposite sides of the law. Unfortunately, the script by Theodore Taylor just doesn’t have the hutzpah to keep it on point with too many dangling threads left untied.

While this manhunt trail movie is all over the map, it’s not an unenjoyable experience. It's actually a good bit of fun. With Dean Martin and Rock Hudson doing what they do best, it’s an easy-breezy watch. Susan Clark stands in as their mutual love interest and she anchors a lot of the dramatics, but her role is too small to be the pin that keeps the thing together. In addition to strong performances, this is a beautiful film. Shot throughout New Mexico, Colorado, and Sequoia National Forest in California, this movie gets a lot out of its locations. This film has all the right pieces for a truly grand epic Western adventure, but somewhere along the line, things didn’t quite fall into place. In the end, we’re left with a well-acted, beautifully shot, slipshod final work from one of Hollywood’s great masters.

Vital Disc Stats: The Blu-ray
Showdown hits Blu-ray for the first time thanks to Kino Lorber Studio Classics. Pressed on a Region A BD-50 disc, the disc is housed in a standard sturdy keepcase. The disc loads to a static image main menu with traditional navigation options. 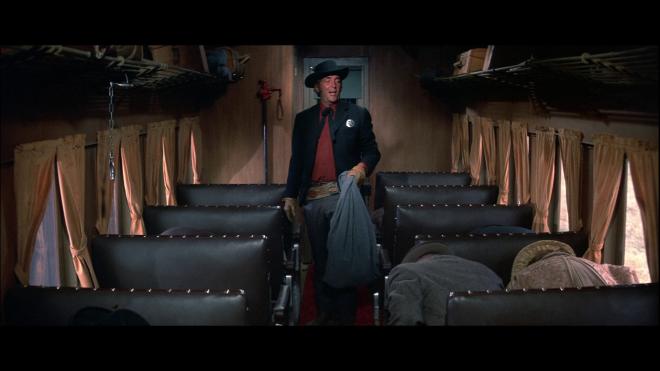 Showdown is a gorgeous film shot in some of the most scenic locations in the U.S., so it’s with great joy that I can report that his transfer holds up nicely. Not perfect, a full restoration effort could mitigate some small nitpicks, but overall this is a beautiful image. In the plus column, grain is natural holding a nice film-like appearance with robust detail levels. Colors are bold and bright leading to some vivid primary hues with healthy natural skin tones. Much of the film offers excellent black levels giving the image a nice sense of depth and dimension throughout. In my nitpicks, there’s a fiar bit of speckling throughout, some sequences can appear softer, and some optical visual effects don’t gel together under high-resolution scrutiny. A couple of day-for-night shots also stick. Small quibbles really with nothing overly serious to knock the score for. 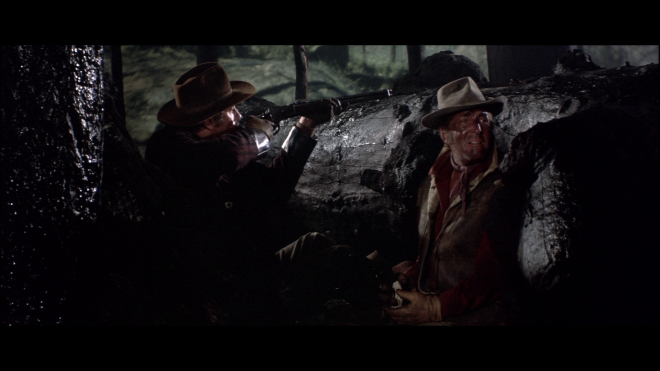 This one also comes packed with an excellent DTS-HD MA 2.0 mono mix. Sound effects, dialog, and scoring are all on point. The big forest fire sequence offers an impressive soundstage leading into the climactic gun battle. Dialog is clean and clear and never at issue. Levels are spot on without the need for any monitoring. Even as a mono track there’s plenty of atmosphere to fill the space providing a sense of imaging even if it’s narrowly confined. Free of his or other age-related issues for a nice clean mix. 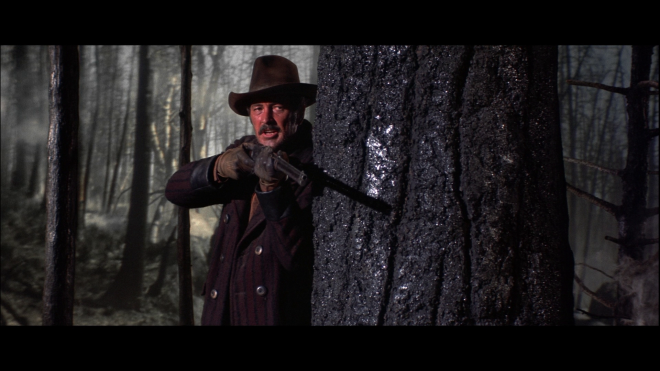 Not the biggest package of bonus features, but this new audio commentary with Howard S. Berger and Steve Mitchell is worth a listen. They give a lot of anecdotal tidbits about the project. After that, it’s Kino Lorber Studio Classics’ usual collection of trailers to round out the extra content.

Showdown isn’t the greatest western nor is it George Seatobn’s finest efforts as a director. With the great cast of Dean Martin and Rock Hudson playing to mutual strengths, it’s an uneven film that never quite nails tone and temperament. While messy, it does hold your attention and the final act is grand scale old west action. If only the rest of the film could have been that steady and assured, we’d have a truly great film. Instead, we have an entertaining way to pass the time.

Kino Lorber Studio Classics delivers Showdown to Blu-ray with a fine effort in the A/V department. Maybe not as pristine as what a fresh restoration could afford, but a beautiful-looking film that looks great in high-definition. This one really comes down to the curious and ardent genre fans - at the very least its Worth A Look