Freaky mixes the horror slasher genre with the body swap comedy in the best way possible that merges extreme gore and blood with some hilarious dialogue that is fun and entertaining for most ages. With great performances from Vince Vaughn and Kathryn Newton, Freaky is a film nobody should skip out on. The 1080p HD transfer looks amazing and the DTS-HD 5.1 audio mix sounds incredible. There are a few short bonus features to boot as well. Highly Recommended! 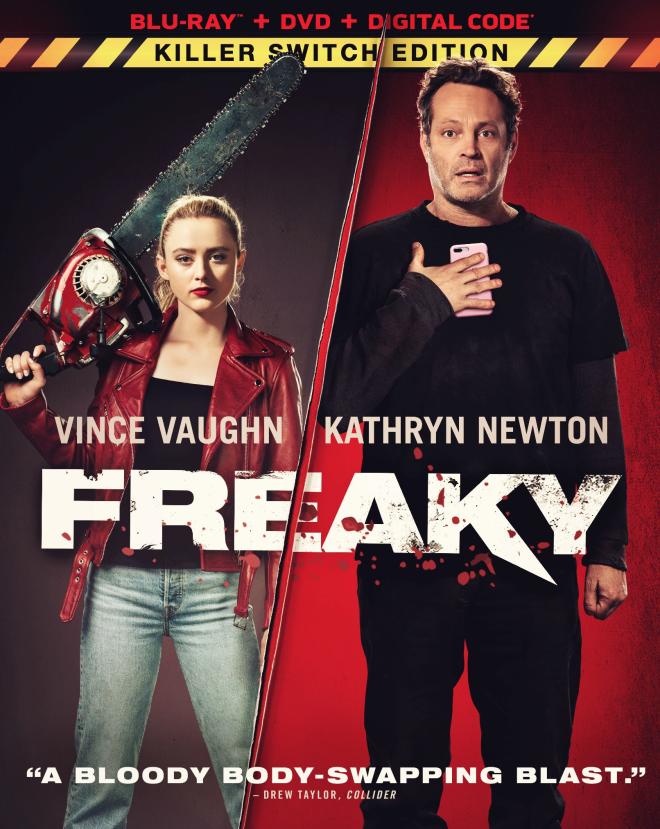 Body swap comedies have been a staple in cinema for several decades. Dudley Moore and Kirk Cameron switched roles in Like Father like Son, as did Fred Savage and Judge Reinhold in Vice Versa in the 1980s. More notably, the story of Freaky Friday became popular when Disney adapted the book into a mainstream film with Jamie Lee Curtis and Lindsay Lohan switching bodies in 2003 that resulted in major financial and critical successes. This particular story element more or less laid dormant until now, where Jason Blum of Blumhouse Pictures and director Christopher Landon injected the horror genre into this comedic realm with their film Freaky that follows a brutal serial killer and a bumbling, shy teenage girl who swap bodies, starring Vince Vaughn and Kathryn Newton. Freaky is thrilling, hilarious, and bloody good fun where it mixes horror and comedy perfectly from start to finish.

Freaky is very self-aware in its modern comedic delivery and characters as it consistently throws out the usual genre tropes and flips it around where it's not necessarily a girl screaming for help and running to their night in shining armor to take out the villains. On the contrary here, this film feels fresh and original while tackling some of PC culture in an entertaining way. Freaky starts out with a fantastically violent sequence that introduces the Blissfield Butcher (Vaughn), as he single-handle murders a group of teenagers at a mansion one evening and takes a mystical dagger from the house. The next day at school, Millie (Newton) and her two friends Nyla and Josh try and avoid the school bullies and discuss the horrific news of the death of their classmates from the night prior.

Millie ends up crossing unfortunate paths with the Blissfield Butcher and he stabs her with this magic knife, thus forcing the body swap. Now, the tall, strong Vince Vaughn is actually Millie, and the shy high school girl is a vicious serial killer, which makes for great comedy. Millie being the brute force she is currently, now takes out everyone she can at school and at parties, while Vaughn is trying to convince her friends that he is in fact Millie, which strays into some wonderful body humor. It all culminates in a time crunch to reverse the swap by midnight or else the two will be stuck in the other's bodies forever.

Landon is no stranger to the horror-comedy genre with his previous films being The Scouts Guide To The Zombie Apocalypse and Happy Death Day. Those perfect elements of comedic timing in a terrifying situation transfer over to Freaky with some truly witty dialogue that feels realistic and funny. This goes hand-in-hand with the sheer brutality of a nostalgic slasher film from the 1980s, complete with gallons of gore and excellent, creative kill scenes, which is enhanced when it's done by a teenage girl and Vince Vaughn getting in touch with his feminine side makes it all the more amusing.

Performances from Newton and Vaughn are simply remarkable in both their physical comedy and skillset to mimic the other's walks and mannerisms. There's also a crazy cameo from Alan Ruck (Ferris Bueller's Day Off), who plays a jerk shop teacher who has it out for Millie. With all these elements coming together, along with a fantastic score and song list, Freaky is a grande edition to the horror and comedy genre with hopes that there will be sequels galore.

Vital Disc Stats: The Blu-ray
Freaky impales its way to Blu-ray+DVD+Digital through Univeral. The discs are housed in a hard, blue plastic case with an insert for the digital code. There is a cardboard sleeve as well that features some fun textured artwork from the film, including the two leads with a chainsaw and iPhone. 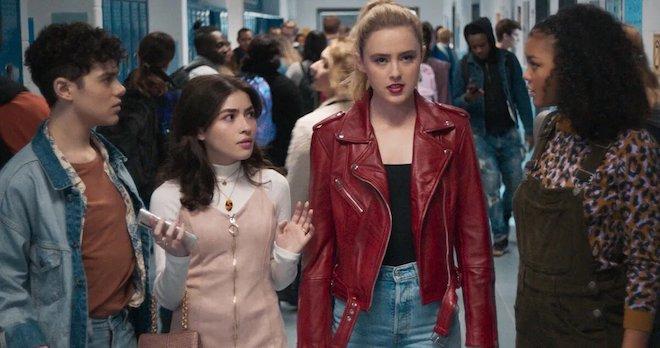 Freaky comes with a 1080p HD transfer from Universal that looks phenomenal. For being a horror slasher film, this is a rather bright-looking movie with bold, rich colors and vivid detail. The color palette is natural in every lighting condition and is consistently punctuated with amazing colors inside the high school and the student's wardrobe. The first scene of the film is dark and steeped in brown and amber colors with some wonderful bursts of red blood. After that though, the film takes place in brightly lit exteriors and interiors where all colors seem to pop with primary goodness. The blood and gore though stand out nicely here.

The detail is sharp as well, revealing every nasty gash and wound, showcasing entrails, veins, and muscles when a sharp weapon is used on a hapless victim. Other close-ups reveal individual facial hairs, makeup effects, and more. Black levels are inky and the skin tones are always natural. The heavier CGI sequences, mainly being when the sky quickly changes above when the magical knife is used can look a little fake, but there is never any pixelation and the detail in the clouds and lightning look great. There were no major instances of banding or aliasing, but there was a tiny bit of video noise that crept in at the beginning of the film, but it fixes itself after the first few minutes. 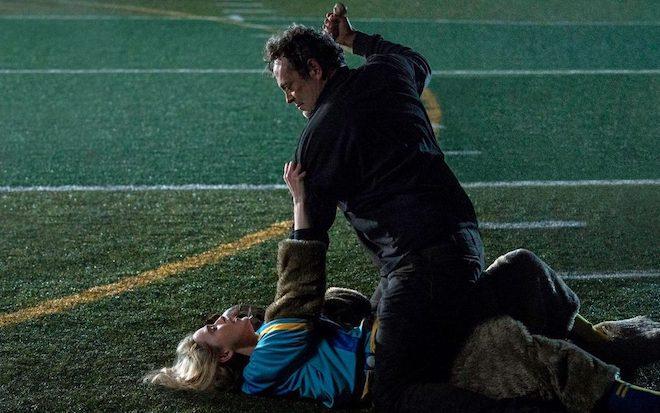 This release comes with a fantastic lossless DTS-HD MA 5.1 audio mix that is everything that a horror movie of this caliber should be. The sound effects are booming and the music hits all of the right notes, conjuring up some good jumps and thrills. Whenever a sharp weapon is thrust upon another body, the sound effect is robust and loud that delivers a good forceful hit with a smack of low-end bass that rumbles nicely. Even the electric table saw sequence has that screeching high frequency that makes the nerves and hairs stand on end perfectly.

Other ambient noises of kids talking in the hallway at school, lockers opening and closing, and other screams and hollers all sound wonderful from the rear speakers. The score and music always enhance the suspense of the film and the dialogue is always clear and easy to follow, free of any audio problems. This is a well-balanced and pitch-perfect horror audio track that is quite immersive when it needs to be. 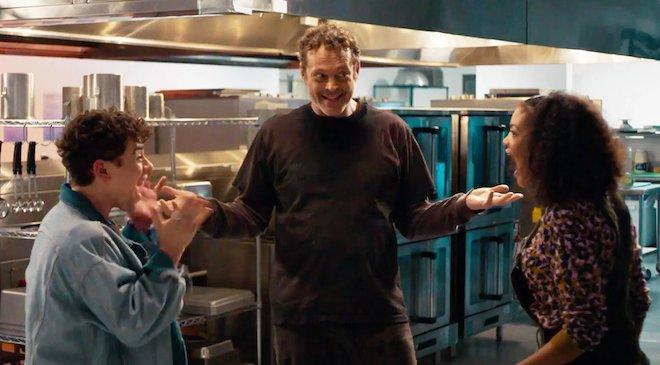 There are only about 19 minutes of bonus material here - all of which are way too short to offer up anything truly fun. And where is the gag reel? This release is burning for one. 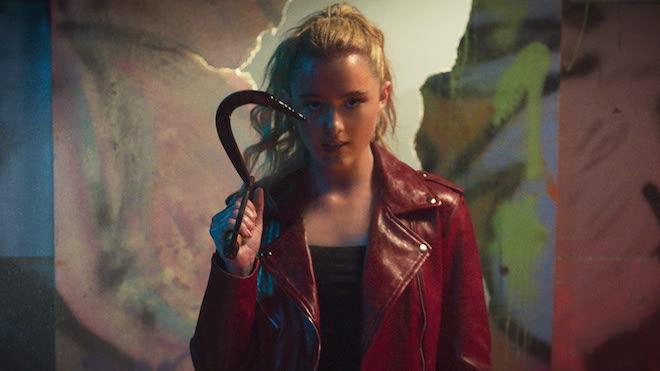 Freaky is a breath of fresh air in the horror slasher genre as it brings an original, modern take on the body-swap arena with some wonderfully funny performances. The carnage and gore are brilliant and the underlying story has a good message. The image looks good in HD and the audio track is excellent. The extras are too short and feel canned, but the audio commentary is worthwhile. Highly Recommended!