Kino Lorber Studio Classics gathers up another Twilight Time title and gives it another run on Blu-ray with the Cannon classic action flick - Runaway Train starring Jon Voight and Eric Roberts. Nominated for Best Actor, Best Supporting Actor, and Best Editing, the film holds up remarkably well in the face of numerous imitations and the lasting Cannon legacy of schlock cinema. KLSC delivers an excellent Blu-ray release with a new 2K transfer, the same audio, and a couple new and old bonus features. Recommended

Manny (Jon Voight) has been in the hole for years after numerous escape attempts. Buck (Eric Roberts) idolizes Manny as the criminal mastermind he wants to become. When Warden Ranken (John P. Ryan) is forced to release Manny back to the general population, Manny takes his one last chance for freedom in a final escape with Buck in tow. The two convicts make their way onto a freight train - only the conductor had a heart attack locking the throttle at full speed. As Manny, Buck, and railway worker Sara (Rebecca De Mornay) desperately trying to stop or slow down the train - Warden Ranken is trying to get on board. 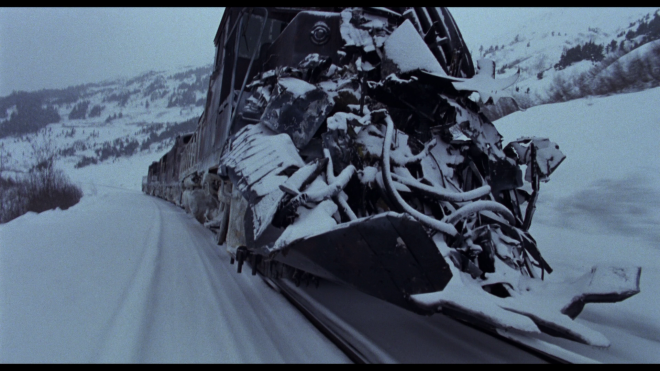 Watching Runaway Train brings up a lot of "what if's." What if Akira Kurosawa had been able to make this movie in the 60s and 70s as he planned? What if Cannon had a better reputation when this film came out and it'd been a hit - would Superman IV be as bad as it is? Would we have actually gotten an 80s Spider-Man movie? If Eric Roberts won the Oscar would he be more popular and successful than his sister today? There are a lot of factors that went into this film finally coming to life that almost boggles the mind. This is one of those films that literally could have been anything while also changing the course for one of the most notorious Hollywood studios of that era.

Director Andrey Konchalovskiy took Kurosawa's vision and turned it into a thinking man's action movie at a time when bullets and bulging muscles were the bread and butter for the genre. When you think of action, you don't immediately think of Jon Voight as a hardened criminal and social anti-hero. Voight delivers a powerful if admittedly over-the-top performance as Manny, a man who hates the world as much as he hates himself. Then you have Eric Roberts as Buck, a small-timer doing a few years who worships Manny as a hero but soon learns the man he idolizes is very different than the one he built up in his head.

What's admirable about this film is that the action is always secondary to the characters. The unstoppable runaway train is simply symbolism for Manny and Buck's life as escaped criminals. Buck wants to get off even if it causes him pain, but Manny is hellbent to see it to the end of the line. It may add tension and terror as they try to find a way to slow the train down or stop it - but their lives are already going to be runaway trains.

This film didn't even need a train to be exciting, they could have been stuck in the Alaskan wilderness on those frozen glaciers with the prison warden on their tails and it would have still been an excellent film. It's on that point I wish there'd been more exposition and the personal dynamic between Manny and Ranken. We get only a few moments before Manny is let out of the hole to set their powerplay. Once the train is out of control, Ranken is an afterthought for a long stretch of track as the control operators try everything they can to stop the locomotive.

Watching this film again I was struck by how Tony Scott's Unstoppable knicked practically every major action beat from this film. Train crashing through another car - check. Attempted helicopter rescue - check. Trying to make the impossible jump to the next car - check. Dangerously unstable bridge with max speed limit - check. The only difference here is our leads are escaped prisoners instead of blue-collar railroad men and the villain is the prison warden instead of the corporate dickhead. Both films are great, they do a lot of the same things, but each film's approach is different enough thematically that they stand apart.

By a wide margin, Runaway Train is the best in the Cannon catalog. That's not a high bar mind you, but there you have it. After years of clunky Chuck Norris movies, Charles Bronson movies, propping up Bo Derek's career, and endless Ninja-themed movies - Cannon had a pretty rough reputation for schlock. And with Runaway Train we have what amounts to an arthouse action movie with a budget by a competent director and a talented cast working beyond the desire of a cash-out paycheck. By this point, Cannon was already hip-deep in their bad practices of taking one film's intended budget, splitting it, and trying to fund another movie at the same time to hopefully recoup past losses. I've often wondered if Runaway Train had been a big audience hit and not just a Critic and Awards Darling if the course of the studio would have changed for the better - or made things worse?

Vital Disc Stats: The Blu-ray
Runaway Train makes a second stop on Blu-ray - this time from Kino Lorber Studio Classics after the original Twilight Time release has now gone out of print. Pressed on a Region A BD-50 disc, the disc is housed in a standard sturdy case with an identical o-card slipcover. The disc loads to a static image main menu with traditional navigation options.

While previous Twilight Time reissues from KLSC have been mostly content with reusing the previous transfer, Runaway Train gets a new 1080p 1.85:1 transfer sourced from a new 2K master that really doesn't change all that much. With a few exceptions, this film has never been known as a bright cheerful, or colorful looking film. It's mostly all shades of white, brown, and black with the bleak wintery landscape and that color tone maintains itself here. Colors have been shifted a little favoring blues, greens a little - reds and blues have a little more pop and flesh tones are a little pinker and healthier. Manny's orange sweater is a deeper shade than the bright orange of the previous transfer.

Details are roughly the same between the releases without much of any improvement there. The notable improvement comes with speckling and damage. Where the Twilight Time release had a few bouts of speckling and some small scratches, this new master has had some cleanup work done, and that speckling isn't apparent. The only time any kind of dirt or speckling appears is during some of the optical effects that were cooked in from the start. Occasionally some whites take on a blue tone but at the same time other instances where the whites appeared grayer in the Twilight Time release they now look closer to true white. All in all this is a fine transfer, it's not better or worse necessarily - just different.

This release for Runaway Train appears to use the same impactful DTS-HD MA 2.0 mix as the previous Twilight Time edition. Doing some disc flipping, I didn't notice any differences. The action scenes are still a sonic rush with a terrific surround quality. Some of the early dialog sequences with Manny and Ranken are still soft and needed some boosting with the volume - just too many hammy accents and with everyone chewing scenery the dialog can get lost so be prepared to nudge the volume a little. Scoring by Trevor Jones is some excellent 80s synth material. Aside from the need for a little monitoring when things quiet down, this audio track is solid and serves the movie well.

Runaway Train didn't have the biggest set of bonus features to begin with and Kino Lorber Studio Classics brings them back for a second go-around. The audio commentary with Eric Roberts, David Del Valle, and C. Courtney Joyner is still a great and informative listen. Considering where his career ended up traversing, Roberts is candid and humble when describing working on the film. New to the batch of bonus features is a Trailers from Hell segment featuring Rod Lurie along with KLSC's traditional batch of trailers.

Runaway Train is a bit of an odd duck action film. Made at a time when action movies didn't favor brains over brawn, this film works to entertain while giving the audience something to gnaw on about the nature of freedom and choice. Voight and Roberts deliver some intense performances - maybe a bit questionable on thickness level but they're committed and they hold the show together from being a run-of-the-mill stunt show.

Kino Lorber Studio Classics gives Runaway Train a second life at Blu-ray after the Twilight Time release went out of print. This disc offers a new transfer that isn't necessarily better or worse, but different. Both transfers have issues so it's a draw in that arena. The audio is still dynamic and engaging if some of the conversation sequences are a bit soft - but when it counts most this is a great mix. The excellent audio commentary returns and is propped up by a new Trailers From Hell segment.

As one of the best Cannon movies of the 80s, you should definitely check out Runaway Train. If you're a fan and already have the previous Blu-ray release, there's not much call for a double-dip here, but if you've been looking to add this to your collection, this is a great pickup at a much more affordable price than the gray market rate for the old Twilight Time disc. Recommended