It Happened on 5th Avenue

It Happened on 5th Avenue may not be the best-known Yuletide classic, but this charming Golden Age comedy about a hobo who impersonates a millionaire and a millionaire who masquerades as a hobo features just enough Christmas cheer to earn it a spot in your holiday viewing rotation. A spirited cast enlivens director Roy Del Ruth's film, while a stunning new 4K restoration, solid audio, and a vintage radio adaptation distinguish Warner Archive's impressive Blu-ray presentation. Recommended.

"To be without friends is a serious form of poverty."

That might sound like a line from It's a Wonderful Life, but the heartfelt statement actually capsulizes the theme of another - albeit lesser known - holiday classic. Strangely enough, Frank Capra considered directing It Happened on 5th Avenue before choosing to helm It's a Wonderful Life instead, and once you see this charming, low-budget comedy, you'll understand why. Whimsical yet substantive and brandishing just enough seasonal cheer to make it a Yuletide favorite, It Happened on 5th Avenue blends humor, sentiment, and social issues so deftly, sometimes it feels downright Capra-esque.

Released just a few months after It's a Wonderful Life, It Happened on 5th Avenue addresses many of the same themes. Within its Christmas context the film looks at corporate greed, depicts shady business dealings, chronicles personal transformations, and emphasizes the importance of a supportive community, yet director Roy Del Ruth adopts a more madcap approach, emphasizing screwball over seriousness. The result is a light, lovely companion piece to Capra's masterwork that's just the ticket when you're out of Kleenex or simply not in the mood for an emotional breakdown. 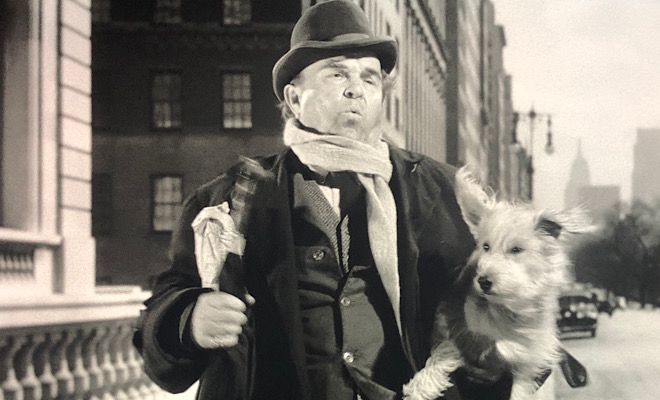 Instead of a guardian angel, It Happened on 5th Avenue features an earthly Mr. Fix-It who innocently yet indelibly influences the lives he touches...and we meet the unassuming man right after the opening credits. Lovable bum Aloysius T. McKeever (Victor Moore) habitually sneaks into the vacated Manhattan mansion of the second richest man in the world, Michael J. O'Connor (Charles Ruggles), every November when the industrial magnate heads south to his winter residence in Virginia. McKeever, known as Mac, enjoys the stately home's finery, parades around the city in O'Connor's classy suits, and relishes adopting a lofty persona.

One day, while wandering through Central Park, he comes upon ex-GI Jim Bullock (Don DeFore) sleeping on a bench. The unemployed veteran was just evicted from one of O'Connor's apartment buildings that soon will be torn to down to erect a splashy skyscraper, and due to the post-war housing crunch, Jim can't find anywhere to live. Mac invites him to move into O'Connor's mansion, but before they get settled they encounter a female intruder. Unbeknownst to them, she's O'Connor's rebellious daughter Trudy (Gale Storm), who has run away from finishing school to make it on her own in New York.

Trudy quickly develops a crush on Jim, but keeps her identity a secret so he doesn't fall in love with her family's wealth instead of her. Complications arise, however, when O'Connor arrives in New York on business, bumps into Trudy, and worries Jim might not be a suitable match. O'Connor wants to meet Jim and agrees to masquerade as a hobo so as not to blow Trudy's cover. Of course Mac invites the "destitute" O'Connor to move in as well, forcing the tycoon to swallow his pride and treat Mac as the lord of his manor. The role reversal doesn't sit well with O'Connor, who threatens to expose the charade, and that's when Trudy summons her mom (Ann Harding) - who reluctantly divorced O'Connor years ago because she was tired of playing second fiddle to his career - to the rescue...just in time for Christmas. 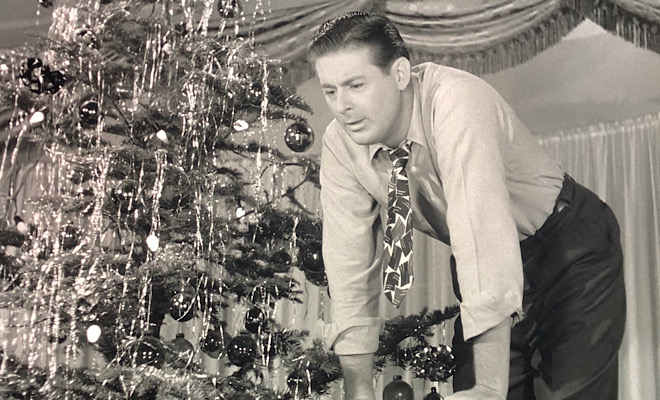 Romantic mix-ups and mistaken identities fuel the plot and provoke plenty of laughs, but It Happened on 5th Avenue resonates because it celebrates the honor and resourcefulness of the common man and reminds us just how powerful and transformative a helping hand and bit of benevolence can be. Unlike It's a Wonderful Life's villainous Mr. Potter, O'Connor isn't evil, just self-absorbed and oblivious to the problems of those less fortunate, and it's up to the impoverished Mac, who values relationships above the almighty dollar, to teach and humble him.

It Happened on 5th Avenue nabbed a well-deserved Oscar nod for Best Original Story, a now-defunct category that recognized the merits of a movie's plot and themes. Those two elements truly distinguish this often delightful motion picture, but unfortunately, the screenplay, which contains several laugh-out-loud moments, some genuine wit and wisdom, and a heaping helping of heart, tends to meander, especially during the film's second half. At 115 minutes, It Happened on 5th Avenue runs about 20 minutes too long. Some judicious tightening (the superfluous songs add little to the action and certainly could have been axed) would give this romp a little more zip without diluting its important message.

DeFore and Storm make a winning couple. Though both would gain lasting notoriety on future TV sitcoms (he on the delightful 1960s Shirley Booth vehicle Hazel, and she on such 1950s hits as My Little Margie and The Gale Storm Show), they exude youthful verve and create palpable chemistry here. The regal Ann Harding gets a rare opportunity to let her hair down, Grant Mitchell shines in one of his last roles, and a young Alan Hale, Jr. - 17 years before Gilligan's Island - perks up every scene in which he appears. 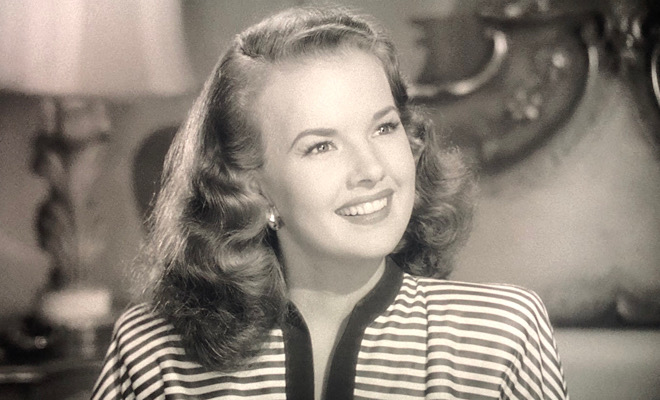 Yet when all is said and done, it's Moore and Ruggles - two vastly underrated veteran actors - who steal the show and lend the picture lasting appeal. Moore's raspy voice, priceless facial expressions, and befuddled demeanor wring laughs and tug the heartstrings, while Ruggles' impeccable comic timing helps him grab focus whenever he's on screen. Both actors enhance the material and compensate for the film's deficiencies, which include its bargain-basement production values and uninspired direction by Del Ruth, a competent Hollywood journeyman who never gained much distinction.

It Happened on 5th Avenue won't make you blubber like a baby like It's a Wonderful Life, but it will infuse you with a warm holiday glow. This charming comedy may not be flashy or expensive, but it touches the heart, nourishes the soul, and renews our faith in humanity. As Charlie Brown's pal Linus once said so eloquently, "That's what Christmas is all about." 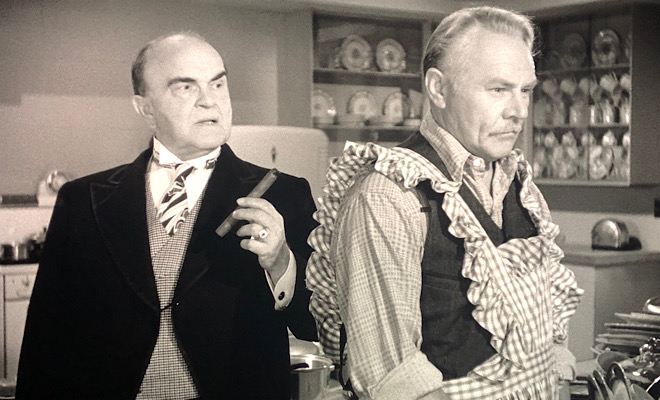 It Happened on 5th Avenue arrives on Blu-ray packaged in a standard case. Video codec is 1080p/AVC MPEG-4 and audio is DTS-HD Master Audio 2.0 mono. Once the disc is inserted into the player, the static menu without music immediately pops up; no previews or promos precede it.

Another brand new 4K restoration culled from the best surviving nitrate elements yields another stunning 1080p/AVC MPEG-4 transfer of a Golden Age classic from Warner Archive. Few independently made films from the era look as clear and vibrant as It Happened on 5th Avenue, which maintains a glorious film-like appearance, thanks to a faint grain structure, rich blacks, bright whites, and wonderfully varied grays. Some scenes sport a bit more texture than others and a missing frame briefly breaks the spell, but the overall presentation remains consistent and fluid throughout. Close-ups especially shine, showcasing Storm's fresh-faced loveliness, DeFore's pudgy cheeks, and Moore's often scruffy wrinkles.

It's immediately apparent It Happened on 5th Avenue was not shot on location in New York City, and the enhanced clarity of this transfer hammers that point home. The rear projection work is almost laughably obvious, but that's a very small price to pay for such terrific image quality. Shadow delineation is quite good, patterns are solid, background details are easy to discern, and nary a single nick, mark, or errant scratch dot the pristine source material. No doubt about it, It Happened on 5th Avenue looks better today than it surely did upon its premiere back in 1947, which is very good news for fans of this under-the-radar holiday classic.

The DTS-HD Master Audio 2.0 mono track supplies clear, well-modulated sound. A slight bit of surface noise can be heard during quiet moments, but any pops and crackle have been erased. All the dialogue is well prioritized and easy to understand, and the music score by Edward Ward fills the room with ease. A few songs  perk up the track (Storm's vocals sound rich and full), and any sonic accents and subtleties are crisply rendered.

The only extra is a vintage radio adaptation of It Happened on 5th Avenue, which aired on the long-running Lux Radio Theatre series on May 19, 1947, just a month after the film's premiere. DeFore, Moore, Ruggles, and Storm all reprise their roles for the 58-minute broadcast, which nicely condenses the story.

A sparkling comedy laced with Christmas overtones, romance, and a dash of social commentary, It Happened on 5th Avenue may not rate as highly as other holiday classics, but still spreads plenty of seasonal cheer. The story of a hobo who impersonates a millionaire and a millionaire who masquerades as a hobo runs about 20 minutes too long, but features plenty of laughs and an array of spirited performances. A stunning new 4K restoration distinguishes Warner Archive's slick Blu-ray presentation that also includes solid audio and a vintage radio adaptation. Recommended.