Steven Soderbergh’s 1995 neo-noir thriller The Underneath centers around a gambling addict who returns home to restart his life only to find himself caught up in a dangerous game. Starring Peter Gallagher, Allison Elliott, and Willian Fichtner the film is a great early 90’s time capsule but is mostly remembered as the film that nearly ended its director’s career. Kino Lorber’s Blu-ray provides an excellent A/V package with only a commentary track for bonus features. Recommended for Soderbergh devotees but for most viewers, I say Give It a Rent. 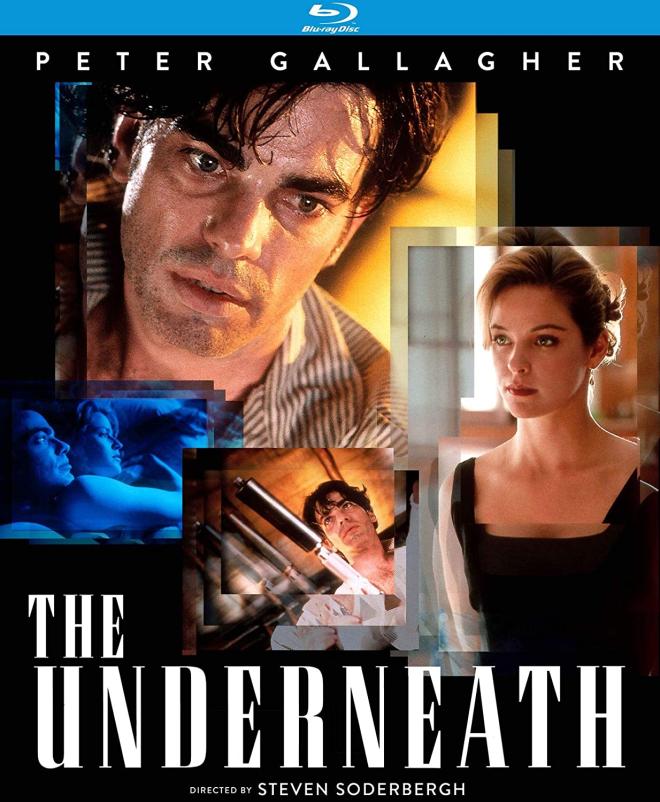 “The Chambers family is a bad investment.”

Michael Chambers (Peter Gallagher) returns home for his mother’s wedding. The gambling addict skipped town for a while after his debts spiraled out of control. Now he is trying to rebuild his life with his family while catching up with his old flame Rachel. Taking a job with his new stepfather as an armored car driver makes it seem as if he is serious about putting his old life behind him. Jealous brother David (Adam Trese) is suspicious of Michael’s return while holding a grudge against his deadbeat brother. However, when Michael meets Rachel’s new crime boss boyfriend Tommy (William Fichtner) he makes a risky deal with him that could be his most dangerous bet ever.

It’s a tale as old as time, right? You slink back into town after burning bridges to hook up with your ex and realize she’s with the local crime boss. Naturally, your next move is to avoid the scumbag killing you by going in on a job with him. Obviously, if you’re Michael Chambers you think all this is going to work out smoothly and perhaps Rachel will see you as a hotshot again and dump Tommy.  When you combine a gambling man, his jilted girlfriend, the crime boss, and a truck filled with money what could go wrong?

Early in the film, Michael visits the local rock club hoping to run into his old flame. At the door, his hand is stamped with SUCKER as he passes the bouncer who is played cooly by writer/director Richard Linklater. It should be no coincidence that Linklater makes an appearance as The Underneath was shot in Austin, Texas the home of the Slacker filmmaker and the cultural mecca of the 90’s indie film boom. Soderbergh’s film doesn’t overhype the setting but Austin’s relaxed and worn aesthetic provides the perfect small-town backdrop for this noir thriller. On my first viewing of the film, I didn’t recall the hand stamp until after the credits rolled. I sat there asking myself questions about the motivations of everyone involved in the heist then I remembered that key moment. It’s a bit on the nose but I rather liked the bold approach here in labeling our man before he even gets his foot in the door.

The use of flashbacks and a non-linear timeline set up the crime thriller element early which benefits the film from veering too far into character drama. Tonally the film makes a big shift when Tommy and Michael enter into their deal. I think Michael deserves our sympathy as he returns home, seeing his mother happy, and hopeful with a new job thanks to his new stepfather Ed (Paul Dooley). That sympathy turns to indifference as he falls for Rachel’s baiting phone calls and secret rendezvous plans. The ensuing chaos is fun to watch. Soderbergh fits it all together in a patchwork assembly that sadly lacks the connective tissue of snappy dialogue and his brand of too-cool-for-school editing techniques. Three years later we ultimately learn that The Underneath stumbled so Out of Sight could run.

Near the end of the film, we find ourselves in a secluded cabin with the words “A man is as big as the things that annoy him” carved into the fireplace mantle. While our key players are in the foreground this piece of set decoration looms in the back obscured by a crazy-faced Tommy wielding a pistol and the smell of blood in the air. These words speak a bit towards the director’s challenge of finishing the picture and his career as a filmmaker. While The Underneath isn’t a complete train wreck of a film Soderbergh faced a number of personal and professional roadblocks that hampered his desire to make the film and even continue his career. It comes as no surprise that his most experimental films Schizopolis and Gray’s Anatomy followed next which created a palette cleanser for a creative rebirth. I like to think that the mantle quote was put there to motivate the production in hopes that we’d see more films from the director.

The brightest spot in the film is the performances. Peter Gallagher nails the charming gambler weaseling his way back into town. Allison Elliott’s steely gaze as the femme fatale here works wonders as she navigates Rachel’s journey from jilted out of work actress to jaded arm candy. William Fichtner is the shining star here as Tommy Dundee the crime boss moonlighting as a club owner. He has this slimy demeanor combined with unhinged jealousy and a cold icy stare that just works wonders. Supporting cast includes Elisabeth Shue, Paul Dooley, and Joe Don Baker. Shelley Duvall and Richard Linklater make cameo appearances which led me to point at the screen like a trained monkey during the movie.

The Underneath is a fine heist thriller with some solid character study bones that could’ve resolved itself differently had it been given more attention. Some great moments building tension and laying out Michael’s past with Rachel. It's easy to see Soderbergh’s camera at play here as well as his use of color and handheld shots. Performances are all good but weirdly enough I found Elizabeth Shue’s performance the most genuine of the bunch. Full of twists, shady characters, and plenty of bad decisions The Underneath fares much better than its director would have you believe.

The Underneath arrives on Blu-ray thanks to Kino Lorber Studio Classics. The film is pressed onto a BD50 Region A Blu-ray disc which is housed in a typical blue keepcase. Load the disc and you’ll directly arrive at the static Main Menu screen with typical navigation options.

The Underneath arrives on Kino Lorber Blu-ray with a 1080p AVC encoded image in 1080p with a 2.35:1 aspect ratio. This excellent HD image is inviting with plenty of strong primaries and fine details dominating the transfer.  Soderbergh plays with image quality which shows in the grain levels from scene to scene. Flashbacks revert to handheld shots with higher grain levels and colored filters applied to the image. Clarity and depth are solid with plenty of fine detail present. Textures in costuming and facial features are apparent from the stubble on Gallagher’s face to the killer early 90’s fashion.

Those with the King of the Hill Criterion Blu-ray with The Underneath as an extra supplement will find the transfer here to be crisper with finer detail and brighter colors overall. Casual viewers shouldn’t worry about an upgrade to this disc but Soderbergh cultists may want to consider this Kino release with the added commentary track for their collections. 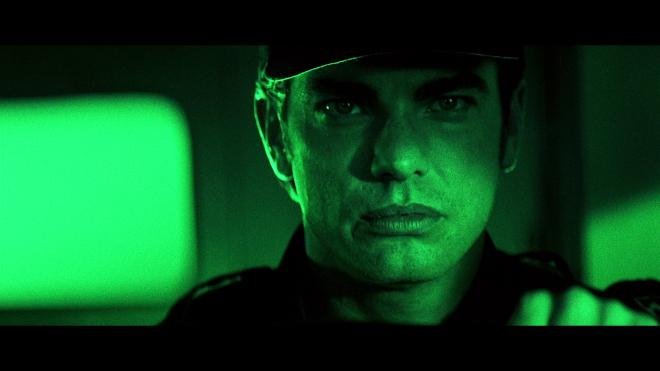 The Underneath is supplied with DTS-HD MA 5.1 and 2.0 audio tracks. I opted for the 5.1 and wasn’t disappointed at all. From the opening credits, the surrounds and LFE are bustling with activity lifting the weighty atmosphere of Soderbergh’s noir thriller. Dialogue-heavy scenes are clear and clean without hiss or pop. Tunes from Cowboy Mouth and Gals Panic enjoy a robust presentation with the mix balancing the club’s dialogue scenes and music nicely. Scoring from Cliff Martinez gets plenty of support and room to breathe. 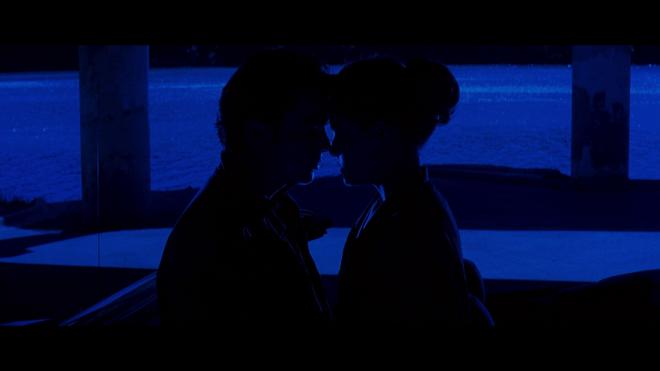 While not loaded with features the interesting commentary track offers plenty to chew on regarding early Soderbergh and his attitudes towards making the troubled film. 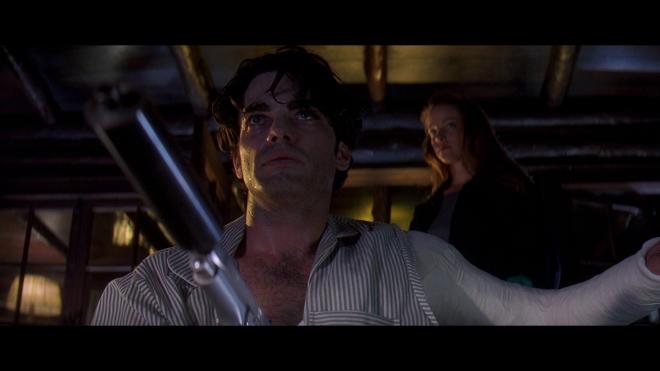 The Underneath is a great neo-noir from a time when the 90’s indie boom was allowing new filmmakers to experiment freely. While not Soderbergh’s best there is much to enjoy here from the interesting performances, the stylized camerawork, and a casual tone that is never hurried. I thought most of the film was enjoyable though the lack of punchy editing and dialogue we see from later Soderbergh is sadly missing here.

Kino Lorber Studio Classics' Blu-ray provides an excellent A/V presentation and a commentary track worth checking out for fans of the film. If you still have your King of the Hill Criterion Blu-ray with The Underneath as a bonus feature there is no urgent need to upgrade. But if you’re just interested in early Soderbergh I say Give it a Rent.