The family of the future marks their feature film debut in 1990’s Jetsons: The Movie. When George Jetson finally gets a promotion from Mr. Spacely he must transfer to a troubled facility that’s been the target of production issues and possible sabotage. The Hanna-Barbera film takes some risks updating the show for a 90’s audience with too much emphasis on social issues and pop tunes from Tiffany. Kino Lorber’s Blu-ray provides a passable A/V experience and only a commentary track and interview for special features. Unless you need to upgrade that ratty old VHS I say Skip it. 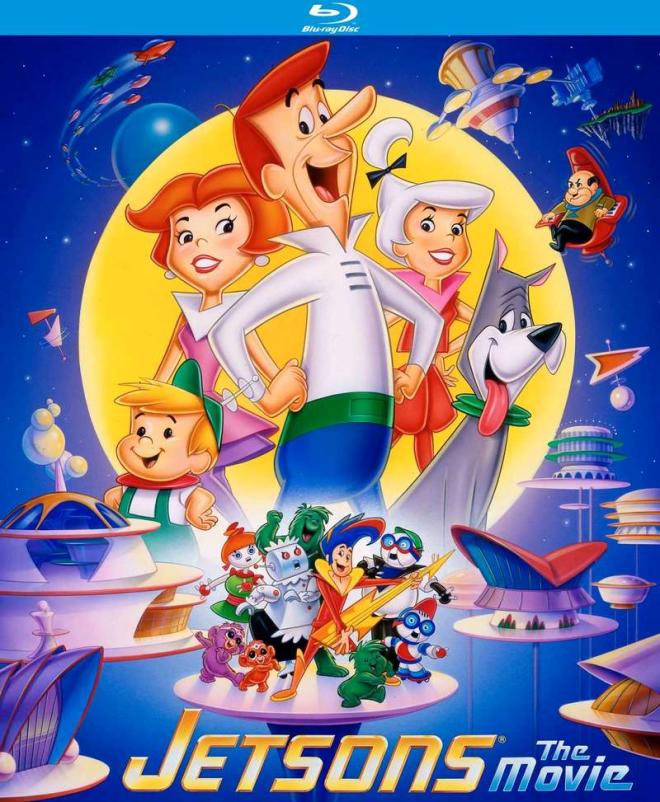 “Teddy, are you programmed to be scared?”

The pompous Mr. Spacely (voiced by legend Mel Blanc) finally promotes George Jetson (voiced by George O’Hanlon) to a vice president position in the company provided he relocates to the new Spacely’s Orbiting Ore Asteroid. The mining operation at this new facility has been experiencing a number of production setbacks including possible sabotage. Though the family is hesitant to move they find their new home at the Intergalactic Garden Estates inviting once they meet with their fuzzy alien neighbors The Furbelows. George starts his first day at the plant but unlike previous vice presidents who’ve helmed the asteroid operation, he isn’t going to let accidents and sabotage send him running scared.

I watched this movie with my kids thinking I could get them to settle down for a while so I could work. My two kids are 4 & 6 years old. Now they aren’t hip to all things animated yet but they know what makes them laugh. I popped in the Blu-ray and secretly hoped that seeing the lovable dog Astro, Rosie the Robot, and the whole Jetson family would surely tickle their funny bone. It’s been years since I sat through a Jetsons’ cartoon but I figured there would be enough here to get a few laughs. We got past the film’s jazzy intro and through the hilarious mayhem of George’s automated morning routine with a few chuckles from my kids. Before I knew it their attention was gone thanks to the stretched-out dialogue exchanges and sustained references to a Rick Dees traffic report. Now I don’t recall when exactly I saw my first Jetsons cartoon but if my 6-year-old has trouble following along then there might be some issues.

Jetsons: The Movie makes every effort to retain its 60’s TV roots while shoehorning in elements from the late 80s early 90s that severely hinder the film’s ability to be just a fun cartoon movie. Environmental concerns form the opening shot of the Jetsons’ home surrounded by smog. A knock to the downfalls of futuristic 21st-century life that mimics our own struggles with air quality abuse and environmental decay. Those themes play out even more as George struggles with the presence of native communities directly affected by the enormous drilling operation he oversees. Combined with Elroy’s absentee father issues, the alien neighbors who serve no purpose other than to offer diversity, and the constant 80’s synth-pop beats headlined by Tiffany make Jetsons: The Movie a messy love letter to 80’s kids.

The film could be considered a musical given how most of the songs attempt to advance the plot or give us a look within a character’s emotions. The Jetson family grooving to 80’s pop icon Tiffany feels odd to a fan of the TV show. Having replaced Janet Waldo as the voice of Judy Jetson in the 11th hour was an obvious marketing move that unfortunately allows the character and it’s legacy to suffer greatly. Tiffany’s tunes are completely harmless but they grind the film’s momentum to a halt including a break for an entire music video about Judy’s love for Apollo the space rocker. That segment along with a few breaks for the Jetsons to rap is cringe-worthy. What surprisingly works well is Judy Jetson’s character arc thanks to her love of music. When she attends the Cosmic Cosmo concert she is just another fan in the crowd but as obsession grows she begins performing songs outside the comfort of her room and eventually inspires others to embrace their love of music as well.

The addition of CG elements into the film is a bit jarring possibly causing fans of the original series to clutch their pearls. In one way those sequences could be an interesting way to usher the old animated future into the new animated future but it just doesn’t work to bridge the gap. It’s this obvious element of Jetsons: The Movie that signals the struggle to remain relevant and topical amidst the floundering popularity of the series compared to other Hanna-Barbera cartoons like The Flintstones. Sure we can all identify with the characters in some way but by 1990 shouldn’t we have something more entertaining? Jane, get me off this crazy thing.

Vital Disc Stats: The Blu-ray
Jetsons: The Movie makes its Region A Blu-ray debut thanks to Kino Lorber. Housed in a typical keepcase the disc loads the KL logo before landing on the static Main Menu screen with the jazzy Jetsons theme playing. Typical navigation options are present. But I know you wanna stay for the whole theme song, right? 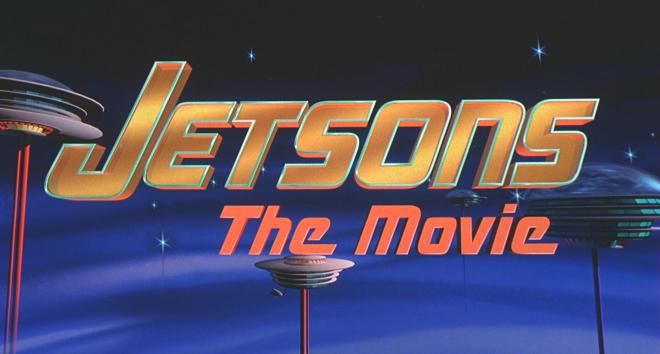 Jetsons: The Movie arrives on Blu-ray in 1080p with a 1.85:1 aspect ratio. This HD image is woefully inconsistent. From the start of the film the image contains specks, dirt, and plenty of noise and heavy grain. CGI elements look clean and polished compared to the hand-drawn animation making the presentation of the two a bit disjointed. It doesn’t gel well. Contrast levels are low resulting in darker scenes appearing muddy and unclear. Primaries are mostly bright with the color palette of this 60’s based cartoon finding ways to incorporate striking colors into everything. Color intensity changes from scene to scene leaving some sequences muddy. Not an impressive visual presentation here but for those looking to just casually enjoy the film it’ll do nicely. 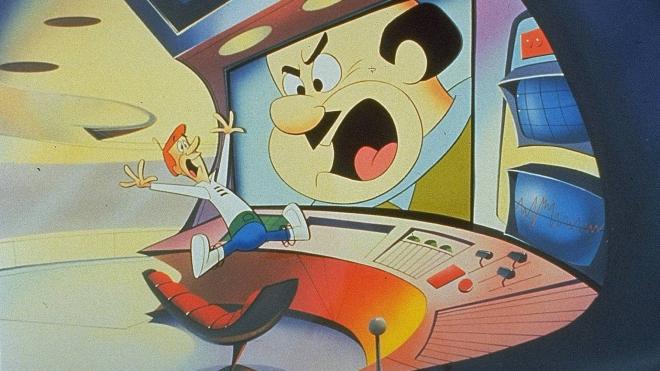 Kino Lorber’s Blu-ray is supplied with a DTS 5.1 and 2.0 lossless audio tracks. I selected the DTS 5.1 audio track and found it a bit lacking in refinement and confidence. While a mostly dialogue-driven film the audio mix only stretches into the front and rear channels when a boppin’ 80’s musical interludes occupy the runtime. Unfortunately, dialogue fights for dominance when anything else occupies the mix whether effects or music. The dialogue seems to be recorded at such a low volume you’d better keep that remote handy to catch Mr. Spacely yelling at George. Fluctuations occur with audio staging resulting in muffled dialogue suddenly changing intensity mid-sentence. 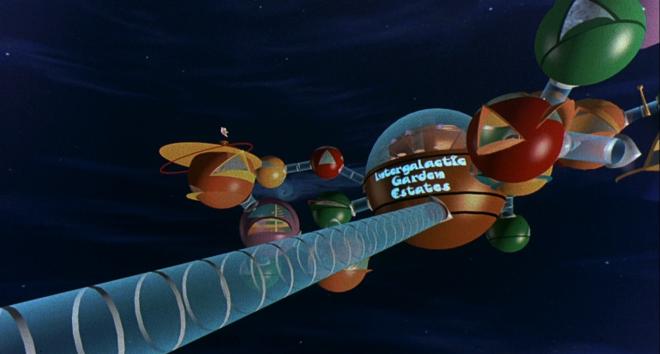 While I wasn’t expecting this release to be chocked full of bonus materials the commentary track is worth a listen for Hanna-Barbera fans. Start with this and move on to the audio interview. 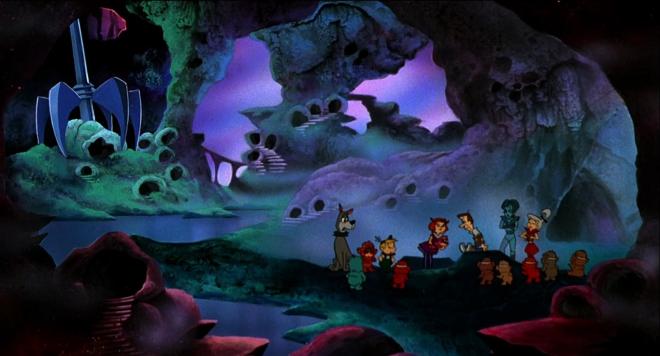 Jetsons: The Movie ushered the family of the future back into our living rooms in a feature-length adventure tailored to the sensibilities of the late 80’s/early 90’s cultural landscape. What could’ve been a great outing ends up a disjointed musical that struggles to find its cartoonish footing. Those great Jetsons jokes and characters you remember are firing on all cylinders but not enough to capture today’s kid audience.

While a memorable fixture of the VHS era in every kid’s home this passable Blu-ray release marks a bittersweet piece of nostalgia. Kino Lorber’s Blu-ray release provides a satisfactory A/V presentation and a slim offering of bonus features. Skip It.