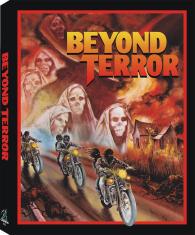 After a drug-fueled night of violence, a group of young degenerates and their hostages find themselves stranded in a remote, abandoned church in rural Spain. Their evening of debauchery and blasphemy quickly turns to greed when they discover a local legend that tells of a vast fortune guarded by mummies in the catacombs beneath the ruins. Their lust for the treasure is short-lived as they find that the supernatural horror in the catacombs is something further than fear… it is Beyond Terror!

Beyond Terror (Más allá del terror) is a lost gem that is long overdue for rediscovery. Never available on home video in the United States, Beyond Terror makes its worldwide Blu-ray debut from Cauldron Films with a brand new 4K scan from the camera negative that has been restored to its original grim glory. Co-written by Juan Piquer Simón (Pieces, Slugs), this early '80s hybrid unfolds like an homage to Amando de Ossorio's Tombs of the Blind Dead, by way of Mario Bava's Rabid Dogs, with a healthy dose of violence, gore, sex, eerie crypts and supernatural revenge!