Leslie Nielson is an occult specialist called in to help the hapless police solve a string of Ripper-like murders in Dark Intruder. Co-starring Mark Richman, this intended series pilot episode produced by Alfred Hitchcock’s production company serves as an inventive and entertaining new take on the classic Dr. Jekyll and Mr. Hyde. It’s a bit lean, maybe a bit goofy in places, but it’s a fun way to burn an hour. Kino Lorber Studio Classics delivers a great Blu-ray release for this gothic horror classic. Worth A Look

San Francisco is enduring a series of terrible murders. At the scene of every crime, a strange sculpture is left. Without anywhere else to turn, Commissioner Misbach (Gilbert Greene) must call upon occult expert Brett Kingsford (Leslie Nielson) for help. But even for Brett, this case is a strange mystery. As he picks away at the mystery, he soon learns of a disturbing connection between his close friend Robert (Mark Richman) and the clawed killer lurking in the streets.

Originally intended to be a replacement for when Alfred Hitchcock Presents left airwaves, Dark Intruder was a pilot episode for a series that would see Leslie Nielson’s Brett solving strange occult crimes week after week. When the pilot failed, the film was expanded to a barely scraping feature-length hour and shot off to theaters. What we’re left with is a movie that looks like a well-shot and produced film with a plot that works just well enough to keep you engaged and offer a couple of good suspense sequences but still feels like a television episode complete with breaks where commercials would be inserted. There's even a comedy fade at the end that's actually a pretty silly gag I can only imagine being used again and again in a series. 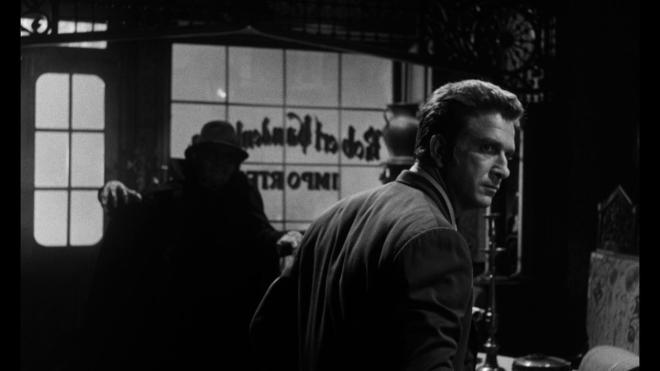 Leslie Nielson plays along well as a shrewd detective type even if he can be a bit hammy trying to over Sherlock his character’s ability to know what’s going on without tipping his hat. He’s also a master of disguise and accents which I imagine had the series been picked up would have been a recurring gimmick. Mark Richman does what he does best here balancing that line of crazy serious and over-the-top smarm that carried him through his career. The plot sustains the hour-long length but it’s pretty obvious where this one starts to go. There are just enough surprises for a great twist to the ending but if this had been any longer it would have stretched itself too far.

Steeped in mood and atmosphere, this little gem gets a lot for very little. Considering it’s trying to replicate late 19th century San Francisco, Dark Intruder is an impressive production. Costuming, set design, cinematography - it’s all captured in beautiful black and white with a nice and creepy Lalo Schifrin score. Sure, this isn’t the best horror film to come down the line, but for a salvaged failed television project, it’s surprisingly effective and manages to keep your attention fixed on the screen.

Vital Disc Stats: The Blu-ray
Dark Intruder arrives on Blu-ray from Kino Lorber Studio Classics. Pressed on a Region A BD-25 disc, the disc is housed in a standard case and loads to a static image main menu with traditional navigation options.

Apparently sourced from a new 2K master, Dark Intruder looks damn good! From the first moments after the opening credits, the image offers magnificent details, beautiful black levels, and a moody shadow-steeped grayscale offering a terrific sense of depth. Film grain is fine and natural giving the image a lovely film-like presentation. The source elements are in great shape - a couple of brief moments of speckling and a small scratch or two is the worst of it. Some segments around some optical effects are a little rough around the edges, but that’s a cooked in effect. All in all, this is a great looking disc.

Dark Intruder also rides in with a solid DTS-HD MA 2.0 mono mix that is great except for one small patch of the film. The opening is terrific stuff, the Schifrin score is nice and creepy setting the stage for the murder with some wonderful atmospherics. Our first bits of dialog are great too and the film is chugging along just great until our first meeting with Leslie Nielsen and Mark Richman on the streets. Something is just off with the mix there where atmospheric background sound effects and the levels and the dialog is just plain difficult to hear. It honestly sounds like the mic operator wasn’t hitting the actor’s marks as their voices slide in and out just barely being audible. I tried this scene on two different setups and it hit each time. Thankfully that couple of minutes is it and it never crops up again. The rest of the audio mix golden.

Not one to leave anything on the table, KLSC gives this one a nice little audio commentary with film historian and Screenwriter Gary Gerani. It’s a nice informative track covering a lot of the background of the film and how it came together. It’s well worth a listen. We get a fun interview with Michael Westmore after that where he details his time working on the film and getting his start in his uncle's shop as an apprentice. The rest of the bonus features package for this disc is the usual collection of trailers.

Dark Intruder may not be the greatest horror movie ever made, but it’s a nice moody, and effective little gem. For a television pilot salvaged as a feature film, it could have been far worse - Universal is well known for that practice with some pretty iffy results - looking at you Agent for h.a.r.m. Leslie Nielsen makes a fun lead in what could have been an interesting series. As a one-off movie, we only get a small glimpse into what this project could have been. Where it stands today, this flick is a fun Jack the Ripper/Dr. Jekyll and Mr. Hyde monster mashup.

Kino Lorber Studio Classics brings Dark Intruder to Blu-ray offering up an excellent video transfer, a decent audio mix, and an informative audio commentary. As a passing curiosity, it’s a lot of fun. I’ve been looking forward to seeing this one ever since I heard a segment of the Shifirin score and wasn't disappointed. For an hour of your time, it passes quickly and serves up some engaging gothic horror entertainment. Worth A Look.