Andrew Bergman's 1990 film The Freshman - arguably one of the last genuinely good movies with Marlon Brando in the lead - features a fish-out-of-water Matthew Broderick getting caught up in the illegal exotic animal trade when all he wants to do is pay for his film school books. With snowballing comedy, the film gradually becomes more and more ridiculous with terrific performances leading the way. Sadly this Blu-ray release from Mill Creek Entertainment is anything but terrific. Using what appears to be - at best - a master prepared for DVD, the video is atrocious and the audio is in the mud. The only thing good about this release is the retro video store style slipcover. This fun little comedy deserves a lot better than this. Skip It.

Clark Kellogg (Matthew Broderick) is a small town kid with big dreams of making it in film. Attending NYU, Clark gets a firsthand introduction to New York when his luggage and all of his money are stolen by the seemingly friendly driver Victor (Bruno Kirby). Feeling sorry for the kid he just screwed over, Victor introduces Clark to the man who inspired The Godfather Carmine Sabatini (Marlon Brando) to get him a job running errands for a big payday. When his first job is to pick up and transport a rare Komodo Dragon from JFK to Jersey, Clark soon finds himself on the wrong side of a lot of laws and New York mafia families. 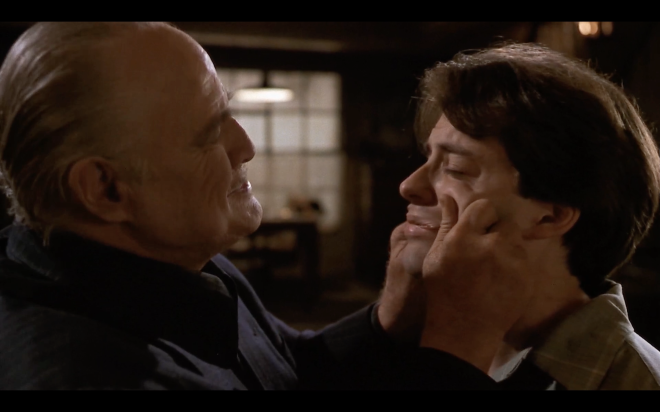 After a run of playing younger characters graduating from the smart-ass teen in Ferris Bueller's Day Off to playing the idealist Colonel Shaw in Glory, Broderick was moving away from the young man role that got him started. At 28, he's stretching his believability as a naive teen in the big city in The Freshman. Broderick was ready for more adult roles where he could actually play his age. Conversely, Marlon Brando was closing out his career becoming more and more erratic and unreliable. This film is a nice return to form for Brando allowing him to play a meta version of his iconic character from The Godfather while also delivering a fun, almost whimsical performance.

While the leads of this film are great, it's the supporting cast who often steal the show. At the top of the pack is Bruno Kirby's Victor. Kirby always had a knack for playing the lovable mook who seems a bit daft but is actually a lot sharper than he looks. His comedic timing is pitch-perfect - the scene where Clark and Carmine first meet works so well with Kirby needlessly translating every time Brando speaks. Penelope Ann Miller gets to break out a little here as well as Tina. She's sultry and beautiful but she also gets to play with the part and comedically spin things around nicely by the film's end. Then we get Frank Whaley, Jon Polito, Maximilian Schell, and Richard all Gant turning in some memorable characters.

All of these actors and performers are slipped into a con-man movie that serves as an ode to the Crime Movie genre while also spoofing on it. There are numerous nods and winks to movies like The Godfather, but the films as a whole plays with the genre cliches as it builds into comedic absurdity. Is the crime importing illegal exotic animals and selling them for a high profit? Sort off… if you count ultimately eating said animal the same thing as selling it. But even then, that's a con too. Writer/Director Andrew Bergman deftly plays with your expectations piling on one reveal after the next to the point you're almost not even sure who is conning who anymore.

I remember The Freshman being a big movie when I was a kid. Or at least it seemed like it was a big movie. From the mall multiplex to the Suncoast Video store to our local mom and pop rental shop, it felt like The Freshman got a lot of promotional materials thrown about. I remember my first viewing of The Freshman only because my parents seemed to be enjoying it, but I didn't get it. I remember only perking up when the lizard was on screen, otherwise, I was just waiting it out until I could have the TV back to play my Nintendo. Years later I give it another shot around the time of Brando's death and was delighted at how well the movie works. I wouldn't call this a genuine classic, but it's very entertaining. It's one of those where if I were scrolling through channels and it was on and still early in the movie, I'd stop and watch it. It's a fun movie with Brando in solid form and Broderick manically trying to keep up.

The Freshman finally lands on Blu-ray in a single-disc release thanks to Mill Creek Entertainment. Pressed on a Region-A BD-25 disc, the disc is housed in a standard keepcase with retro video store themed slipcover. The disc loads to a static image main menu with traditional navigation options.

I fully understand that some imprint and boutique labels don't get to control the master they're handed by the studio, they just try to make the best of it. Mill Creek Entertainment is in a class unto itself in that arena where most of their releases are pretty rough but every now and again they get a genuine winner. I was hoping The Freshman would be the latter, but sadly this is probably one of the most atrocious Blu-ray releases I've ever seen. I never had this movie on DVD and I'm pretty sure the last time I saw it was on cable, but this master looks like it predates DVD. That opening TriStar Pictures intro is your first hint that this is going to be rough. Everything from micro blocking to speckling, scratches, and softness hit that intro - and continue throughout the rest of the film's run. Fine details and textures almost never come to life. Colors are about as dull and lifeless as they can be. There's no depth or dimension to the image with black levels almost always either crushed out or a brown mud color. I've seen rough but watchable transfers before, but for a film that's hardly 30 years old, it shouldn't look this bad.

Sadly things don't improve much with the DTS-HD MA 2.0 audio mix. While the basics like dialog and music are covered, this is a pretty flat and lifeless mix. For a film shot on location in New York and featuring one of the zaniest climaxes, there's just no atmosphere or range. There's nothing to make you feel like you're a part of the action as a member of the audience. Dialog is well presented and considering a number of the jokes hinge on misunderstanding people, it's nice you can hear what they're saying but even then there's nothing particularly crisp or lively. This mix just barely gets the job done and even then it struggles at that.

The best part of this release are the bonus features… there aren't any. So there's nothing to get your hopes up for only to be let down by. Yay!

I like The Freshman. It's a genuinely nice comedy that works well. I wouldn't call it a favorite, but for the handful of times I've seen it in the last 20 years or so, I've enjoyed it. Matthew Broderick has always had a strong handle of the Fish out of Water naive youngster who has to figure out a way to solve the mess he's in. Brando looks like he's genuinely having a good time playing a riff on one of his most famous characters while also delivering a great performance. The cast is a hoot, the script is sharp, and the movie is a fun time. It just deserves a Blu-ray release that's above and beyond better than what we've got here. Mill Creek Entertainment clearly got stuck with what they could get, but that doesn't make this Blu-ray's A/V failings any easier to swallow. When the best thing about the release is the VHS video store themed slipcover - you've got a disc that's best served as a drink coaster. Unless you're really hard up to watch The Freshman - do yourself a favor and skip this release. Your wallet will thank you. Skip It.