Overview - A marksman (Wahlberg) living in exile is coaxed back into action after learning of a plot to kill the president. Ultimately double-crossed and framed for the attempt, he goes on the run to track the real killer and find out who exactly set him up, and why.
OVERALL
Worth a Look

What if John Rambo were re-invented for the Dubya era, only without a Vietnam War to fight, and looking a lot like Mark Wahlberg? That's the premise of 'Shooter,' a modern updating of Stephen Hunter's 1993 cult novel "Point of Impact."

The story itself is nothing if not ambitious, grafting a conspiracy thriller with socio political commentary, and throwing in a little lone-gunslinger-riding-in-on-white-horse-to-kick-ass attitude for good measure. The result is a mishmash that feels oddly retro, but stills packs a few modern twists.

Wahlberg stars as Bob Lee Swagger, a highly-respected but now cynical retired Marine who has banished himself to what's left of the American frontier. Pressed back into service as a sniper to help stop an assassination attempt against the President, Swagger soon finds himself double-crossed with two bullet holes in his chest, and framed for a murder he didn't commit.

Determined to prove his innocence, Swagger goes on the run, inadvertently enlisting the aid of his partner's widow (Kara Mara) and a rookie detective (Michael Pena) who may be the only person in the nation who believes him. Swagger will have to evade both the authorities and the shadow organization that wants him dead if he's to clear his name and come out alive.

As directed by Antoine Fuqua ('Training Day,' 'King Arthur'), 'Shooter' is certainly is unique. Updating Hunter's Vietnam-era story to present day brings a promising new subtext to the film in our post-9/11 world, but at the same time it turns its hero into somewhat of a relic. Compared to the post-Vietnam era, our culture's attitude towards our soldiers has changed dramatically, leaving Swagger's anti-establishment bent ringing hollow, and at times bordering on some sort of parody.

Wahlberg's lackluster performance doesn't help matters. Failing to find the dark, wounded heart of his character, and instead playing up the stoic action-hero qualities -- Wahlberg comes off like the bastard child of John Rambo and John McClane, with a little bit of 'In the Line of Fire'-era Clint Eastwood thrown in for good measure.

Yet while 'Shooter' never truly coalesces as the hybrid of '70s political thriller, action film and detective story it strives for, it is refreshingly unpredictable. Fuqua nicely balances the main story of Swagger on the lam with Pena's pursuit, as well as the slow-building reveal of the true nature of the shadow conspiracy, creating a genuinely suspenseful and intriguing film with a pace that never lags. Only a routine mountain-top climax deflates the tension, but it arrives too late to be truly fatal.

In the final analysis, 'Shooter' is certainly not a classic on par with such seminal '70s political thrillers as 'Day of the Condor,' 'Parallax View' or 'Targets,' but for most of its 125-minute runtime, its intelligent design makes it an admirable, intriguing and compulsively watchable entry in the genre. 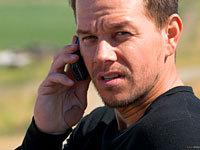 Paramount brings 'Shooter' to both Blu-ray and HD DVD about a month after the standard-def DVD, and (as is commonplace today with new releases), all are minted from the same high-def master. Though the studio seems to have been experimenting with AVC MPEG-4 encodes on some of its recent Blu-ray releases, for 'Shooter' they've reverted back to 1080p/MPEG-2. Although the HD DVD still receives the AVC MPEG-4 treatment, both high-def transfers looked identical to me.

I have to admit to being a bit disappointed with the visual design of 'Shooter.' I really enjoyed the look of some of director Antoine Fuqua's previous work (particularly 'Training Day'), but it seems like lately his films have become a bit more nondescript -- it's as if he's taken a page out of the Tony Scott playbook ('Deja Vu,' 'Enemy of the State') with a glossy, high-contrast look that's certainly slick, but lacks any discernible personality or uniqueness. It's particularly surprising choice for 'Shooter,' as a tougher, grittier style of photography likely would have suited the subject matter far better.

That said, technically this is a fine transfer. Befitting a new release, the source is pristine, with all blemishes and film grain white-washed out of existence (along with any sense of realism or naturalness). Contrast is hot, with the highs clearly tweaked, and blacks crushed down a bit. There is also frequent use of color filtering (especially on wide shots of cityscapes, horizons, etc.) which adds an additional artifact cast over the whole image.

Visually, Fuqua seems to favor tight close-ups, which reveal excellent detail. Every pore on Mark Wahlberg's sweaty mug is clearly visible, and even wider shots enjoy nice depth. Colors are quite stylized, with a tendency for blues to be most prominent in the palette, and reds and oranges to be more subdued. Fleshtones generally look a bit weird as a result, with everyone a pasty shade of orange, but hues remain fairly solid and don't bleed or fuzz out. Only some noise in the most high-contrast, low-light scenes is an irritant. Otherwise, 'Shooter' is a upper-tier, four-star transfer.

Forgive the rant, but at this point Paramount should really be offering high-resolution audio (PCM, Dolby TrueHD, DTS-MA -- take your pick) across the board on its high-def new releases. Instead, the studio continues to offer unequal standard audio specs across its dual-format releases, giving this Blu-ray edition of 'Shooter' a Dolby Digital 5.1 surround track at a measly 640kbps, while the HD DVD gets a 1.5mbps Dolby Digital-Plus mix.

Although the extra bits for the HD DVD do result in a slightly improved sense of envelopment and power, neither next-gen version blew me away.

A strange amalgam of genres, surround presence in 'Shooter' tends to vary scene-to-scene. Action sequences (such as the opener and the pivotal assassination scene) are generally first-rate. Gunshots, crowd noise, score bleed, etc., fill the rears nicely, while imaging is tight and defined, and placement of discrete effects is achieved with pin point accuracy.

The rest of 'Shooter' is a bit more dull. Ambiance is often lacking in quieter dialogue scenes, with only outdoor and nature scenes featuring a bit of atmosphere -- neither the Blu-ray nor the HD DVD provide much excitement here. Dynamics are bolstered slightly on the Dolby Digital-Plus track, with a bit heavier bass and a little better clarity. Dialogue is excellent on both tracks, with volume balance pitch perfect. 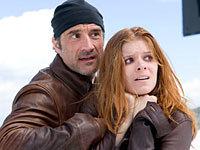 'Shooter' features identical extras on each of its Blu-ray, HD DVD and standard-def DVD editions.

First up are two featurettes. "Survival of the Fittest" (21 minutes) departs from the usual making-of by not focusing on the usual plot recap, movie clips and on-set footage. Instead, the majority of this piece is a manual on snipers and the training and technology required to portray them accurately on-screen. The film's technical advisor, ex-Gunnery Sergeant Patrick Garrity takes center stage, as we see him take the film's supporting cast (including Michael Pena and Kate Mara) through their paces. MIA from this featurette is the film's star Mark Wahlberg, but director Antoine Fuqua, producer Ric Kidney, screenwriter Jonathan Lemkin and novelist Stephen Hunter all weigh in to praise the film's realism.

"Independence Hall" (7 minutes) is much more focused, devoted exclusively to dissecting how the film's centerpiece assassination scene was staged and created.

There are also eight Deleted Scenes (11 minutes). Nothing here adds significantly to the film's already long 125 minutes, although there is one rather amusing sequence featuring Wahlberg attempting to buy a handgun at a Southern general store.

Finally, the last major extra is Fuqua's solo screen-specific audio commentary. I've always enjoyed the tracks on his previous films, as he is a strong, eloquent speaker. Here he speaks directly to his passion for the original novel "Point of Impact" and updating its Vietnam-era concerns for the post-9/11 age. Though I wish more of this subtext made it into the film, Fuqua's track speaks well to the intent. There is also a little bit of overlap with the featurettes, as Fuqua again dives in on the film's technical challenges, as well as the staging of the key sequences, including the Independence Hall assassination.

Rounding things out is the film's Theatrical Trailer.

(Note that all of the above bonus materials are presented in full 1080p video. While some of the on-set material looks like a 480 blow-up, overall the quality is excellent.)

'Shooter' is an interesting amalgam of material and eras. Based on the cult novel "Point of Impact," the story's Vietnam-era concerns have been updated to the post-9/11 world with interesting results. Part action film, part political drama, part cop-detective story, it is not entirely successful on any of these fronts, but it does offer an unusual twist and perspective on routine assassination thrillers.

Although this Blu-ray lags slightly behind its HD DVD counterpart in terms of audio, the video transfer earns four stars, and the insightful supplements package is well presented in 1080p video. Well worth a look for fans of the genre and/or Mark Wahlberg.

Sale Price 21.05
Buy Now
3rd Party 14.39
In Stock.
See what people are saying about this story or others
See Comments in Forum
Previous Next
Pre-Orders
Tomorrow's latest releases