It's impossible to go longer than a year without a new Graboid movie! Tremors: Shrieker Island brings Michael Gross back as Burt Gummer to do what he does best - kill some Graboids! Only this time he's going up against a legion of genetically modified Super-Graboids that are smarter and more dangerous than anything anyone has ever seen before. The sixth direct-to-video sequel in the series, it knows exactly what it is. The franchise steeps in self-aware comedy for a largely middling-but-entertaining movie until the bonkers final act. At this point, you know exactly what you're getting into. Worth A Look

High-Def Digest was given the chance to take a look at Tremors: Shrieker Island, courtesy of Universal Studios Home Entertainment. The Video, Audio, and Bonus Features sections have not been analyzed since they're not pertinent at the moment. However, when a Blu-ray is made available, we will update the review accordingly.

On a remote island near Thailand, a deadly hunt is taking place lead by a brilliant-but-insane billionaire geneticist. Bill (Richard Brake) hosts the rich elite looking to get a thrill and feel some genuine danger. Now after killing everything else on the planet worth hunting on the planet, Bill has unleashed Graboids on his island. But not just any Graboids - genetically modified beasts to make the hunt more dangerous and deadly. Unfortunately, the Graboids got smarter - and their life-cycle accelerated so now the island is also infested with the heat-vision biped Shriekers! Neighboring biologist Jas (Caroline Langrishe) knows the one man who can save them - her old flame Burt Gummer (Michael Gross). Jimmy (Jon Heder), Freddie (Jackie Cruz), and the rest of Jas' team will have to help Burt and use their limited supplies of cast-off WWII surplus to find a way to end the underground reign of terror once and for all. 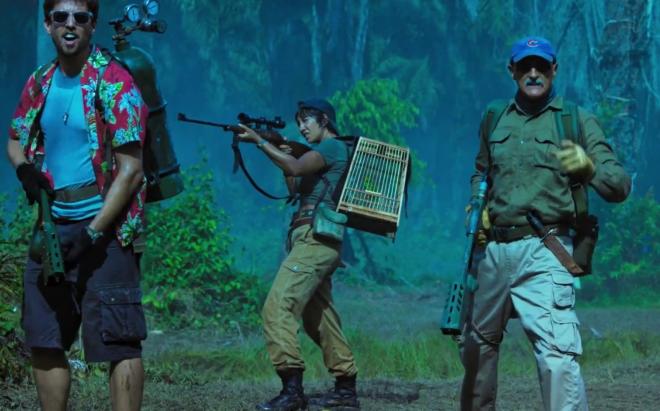 The Tremors franchise is a bit of a fool me once, shame on you, fool me twice shame on me franchise. The first Tremors (coming soon to 4k UHD from Arrow) is a Land-Jaws monster flick and has grown into a genuine cult classic. Kevin Bacon and Fred Ward were the stars, but Michael Gross and his arsenal easily stole the show. For thirty years now Gross has been the franchise mainstay never missing a chance to put on a pair of smoked aviators, ball cap, and gear up with some ridiculous weaponry. With each sequel, and brief television series, the franchise devolved into essentially pizza-flavored Pringles, you could be enjoying a better class of junk food but - this brand is always reliable and there when you need it at a cheap price.

The franchise has long ago gone fully self-aware and with this seventh and possibly final outing, early dry stumbles are forgiven for a truly delightfully hilarious ending. Writer/Director Don Michael Paul has kept this franchise breathing now since Tremors 5: Bloodlines took the Graboids to Africa. After the prequel fourth film with the origin of the Graboids, the town of Perfection, and the Gummer linage and their love for explosive firearms, the franchise could only go on by embracing the insanity a little, and it worked. With Tremors: Shrieker Island the film takes the plot of The Most Dangerous Game and throws Shriekers and Graboids into the mix. Of course, it gets out of hand and Burt is the only man capable of taking care of the problem. At 73, Gross still has the knack for bringing the crazy survivalist Gummer to the front of the pack - if only there had been more of him.

The seismic issue with this Tremors outing is that it's pretty bland for a long chunk of the movie. The setup is there with Richard Brake getting to go full crazy man hunter-in-over-his-head, but that's not enough to sustain interest. Even with familiar faces like Heder, Brake, and Orange is the New Black's Jackie Cruz, they're not enough to sustain interest. We're here for Michael Gross damn it! That said, I love it when we finally meet Gummer again - he's living on an isolated island and has gone full Tom Hanks in Cast Away. Of course, once he's recruited into action he's back in the saddle and it's off to the races... but at a slow clop. The Shriekers get their grand return and are more deadly than before with a pretty damn cool sequence - but we really don't get to see them much beyond that. Without a large budget to work with, we have a lot of implied Shrieker and Graboid action, and when we do see something, it's mostly all CGI and quick cuts. And the show is fun, it gets some gnarly bits here and there with some good deaths, but it's pretty mediocre. That is until the end.

I'm spoilers averse but I have to say I love how the final act of the movie takes itself deadly serious and apes the tone of Logan and Rambo: Last Blood. It leans into that vibe so heavily that it's instantly hilarious and makes you wish the entire movie had maintained that tone. The music swells dramatically, it's slow motion, if it was any other franchise you might even have shed a tear, but since it's Tremors you're laughing right along with the movie. And if the conclusion isn't enough, the credits montage at the end pulls one last amazing gag. It's a 5-Star finish for a largely 2.5-Star movie. If this is the end - it's fitting and perhaps time. But, this is Tremors, the franchise has had more than one death and rebirth, so maybe it's the perfect time to get the canceled Kevin Bacon/Fred Ward reunion project back on track. Or not...

Tremors: Shrieker Island does what it does best by giving fans some new and improved deadly Graboids, but fatigue has also set in. Seven films will do that. Michael Gross saves the day - once he arrives - but that takes a while to happen. 2/3 of the movie is pretty slim pickings but there's enough here to enjoy for diverting entertainment value. The overly dramatic ending saves the film allowing the franchise to lean into its ridiculous longevity. If this is the end, it may not be completely satisfying but it works. If this is the break before another franchise rebirth - it passes the time. Worth A Look