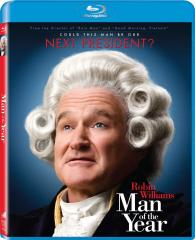 Tom Dobbs (Robin Williams), the satirical host of a political talk show, decides to shake things up by running for president after making comments that he would be a better president than the leader who currently occupies the White House. His fans begin a grassroots campaign that catapults him into the Oval Office, but soon after moving in it is revealed a computer glitch mistakenly awarded him the presidency. Tom is left with a tough choice, stay the course or head back behind the microphone.