Clint Goodman (Tim Matheson) has a good life - or so he thought. His beautiful wife Joanna (Jennifer Jason Leigh) is two-timing him with the sleazy doctor Cortland van Owen. When Clint turns down a lucrative offer on his business, Joanna and Cortland conspire to commit the perfect murder that even Sheriff Eberly (Hoyt Axton) couldn't detect. But someone has other plans for the murdering lovers and their new-found riches. 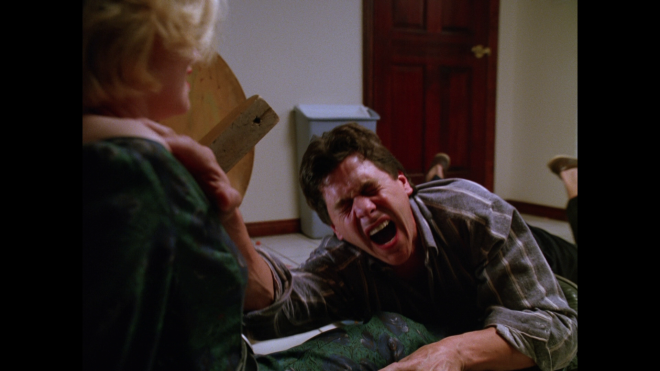 Television movies have an interesting structure. While most films follow the traditional three-act placement of an inciting incident, building dramatic middle, with climactic peak and let off, television movies have somewhere in the range of six to eight acts. You have to hook the audience, set the stakes, and move the plot fast to keep their attention.

The simple reason for this difference in structure and pacing is commercials.By the time the first commercial arrives, the audience needs to want to come back for more. This is especially important for the final act when the commercials hit every few minutes with increasing frequency until the closing credits. With Buried Alive, Frank Darabont not only nailed an excellent cinematic structure, he nailed TV Movie structure deftly building tension, suspense, and some great classic horror scares.

No stranger to horror, Darabont had already written A Nightmare on Elm Street 3: Dream Warriors, The Blob, and The Fly II before Buried Alive went into production. Obviously, he's more famous for his later efforts like his Stephen King films The Shawshank Redemption, The Green Mile, and The Mist - but you can see in this humble beginning the elements of what made those later films work so well. This is a classy horror movie focused more on suspense than splashy stabby stabby gore. Buried Alive easily could have turned into a low-rent slasher but it pulls back for a cerebral approach.

One of the best aspects of Darabont's work behind the camera is managing characters and letting his actors do their work. Tim Matheson, Jennifer Jason Leigh, and William Atherton are all turning in great work here. Atherton in particular looks like he's having a blast in his peak sleazeball years between Die Hard and Die Hard 2: Die Harder. Jennifer Jason Leigh holds most of the screentime here carrying a lot of the emotional weight and she easily handles the swing from nervous to manic elation to sustained terror. Tim Matheson is also impressive - but I don't want to go into his part too much for the sake of spoilers. I mean, the title is a spoiler, but just trust me - he's good. Hoyt Axton may not have a lot to do, but he makes an impression and delivers another lovable supporting character.

If there's a fault for Buried Alive is that it was subjected to the television movie structure and almost moves too fast for its own good. 93-minutes seems awful short, but when you put it in the context of commercial breaks, the broadcast runtime was about two hours. If this were a theatrical film, an extra fifteen minutes of screentime could help resolve some of the plot issues.

A lot of this film's mechanisms turn on the characters simply accepting things at face value. There are enough throw-away lines to give you a reason why this isn't done or why a character doesn't do that thing, but they're still stretching suspension of disbelief a bit. Really though, those plot simplifications for time constraints are my only real quibble here. Buried Alive is a lean little horror thriller with a lot working for it. If you haven't seen it, it's time to check it out. Don't let the silly sequel dissuade you from giving this one a run-through.

Buried Alive digs up a fine single-disc Blu-ray release thanks to Kino Lorber Studio Classics. Pressed on a Region A BD-50 disc, the disc is housed in a standard keepcase with an identical o-card slipcover featuring new art by Vince Evans. The disc loads to a static image main menu with traditional navigation options.

Buried Alive earns a solid 1080p 1.37:1 transfer reportedly struck from a new 2K master for this release. Television films often have a bad reputation for looking cheap - and for many that's true. While Buried Alive wasn't a lavish production, it has great design and detail work. The dream home Clint built for his wife and their hopeful future family is a great piece of set work right down to the claustrophobic basement. There's some great makeup work, especially some gnarly finger wounds that are on full display. Film grain is nice and natural-looking without signs of digital scrubbing or any unsightly edge enhancement. There are a few moments of optical zooms for shock effect that look a little rough around the edges, but nothing too severe. All in all a pleasing image transfer.

Buried Alive features a respectable DTS-HD MA 2.0 mono audio mix. Given the limited production, this isn't a large soundscape to deal with and mostly covers the basics of dialogue, key sound effects, and a simple music score to heighten the mood. Dialogue is clean throughout without issues. The sound design is limited, but has some impact - atmospherics really come into play in the final stretch of the film. Again not the most dynamic audio mix, but it's effective and gets the job done.

Bonus features are on the slim side. There's a nice audio commentary with Bryan Reesman who offers up some insight and details about the film. After that we get a great interview with William Atherton that runs way too short - he's got a lot to offer and is often very funny so I wish he'd gotten more time or even his own commentary would have been fun. After that, we get the standard assortment of KLSC trailers.

Just because Buried Alive found life on the USA network instead of a theater screen doesn't mean it should be dismissed - especially in the catalog of Frank Darabont pictures. As his directorial debut, it's a lean Hitchcockian horror/thriller that accomplishes a lot with little and banks on the talents of its great cast. Kino Lorber Studio Classics delivers a worthy Blu-ray release with a solid respectable A/V presentation, an informative commentary track, and an interview with William Atherton. Fans should be pleased with this release, if you've never seen it, it's absolutely worth checking out. Recommended.