John Ford and John Wayne were a cinematic powerhouse working together on nearly two-dozen films stretching all the way back to the Silent era when Wayne was a prop man and an uncredited day player. Whenever either man needed a hit for their respective careers - they'd turn out something worth trudging to the theater for. Three of their best were the "Cavalry Trilogy" - Fort Apache, She Wore A Yellow Ribbon, and finishing with Rio Grande - a family epic set against the backdrop of the frontier fight to tame the west. Now Olive Films brings Rio Grande to Blu-ray as a member of their deluxe Olive Signature label with a new beautiful restoration, splendid audio, and a terrific set of bonus features. Western fans, John Wayne fans, John Ford fans; this is an essential piece of the collection - Highly Recommended.

Lt. Colonel Kirby Yorke (John Wayne) has been on the frontier for a long time. Having survived the disastrous tenure of Owen Thursday, he's now in command of a rag-tag regiment of cavalrymen tasked with holding the Rio Grande river and keeping the Apaches out of Texas. Exhausted from endless raids and unable to pursue the raiders into Mexico - Yorke finds himself questioning the value of his military career. To make matters more stressful, the son he hasn't seen in 15 years Jeff (Claude Jarman Jr.) has been assigned to his regiment after failing out of West Point. Not far behind, Kirby's estranged wife Kathleen (Maureen O'Hara) has arrived at camp to buy her son out of the service. 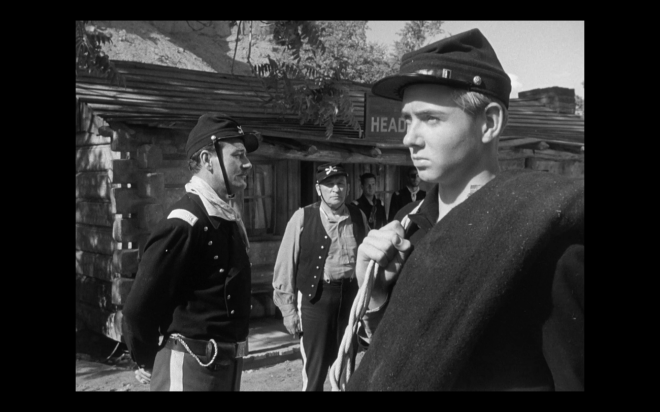 There's nothing quite like a John Ford / John Wayne Western. From Stagecoach to The Searchers, the two titans delivered one terrific genre-defining entry after another. The loosely dubbed "Cavalry Trilogy" is a major highlight of their mutual careers. In the thematic retelling of Custer's disastrous raid, Fort Apache sees John Wayne more or less playing second rung to Henry Fonda's tyrannical Thursday. While Wayne was top-billed, Fort Apache is Henry Fonda's show. She Wore A Yellow Ribbon is the unrelated middle child of this trilogy, but in a rare-for-the-day move, Rio Grande sees John Wayne reprise his role of Colonel Kirby from Fort Apache.

When we first met him, Kirby was an idealist, someone who believed in duty and honor and his position as a counterweight to Thursday's ego and glory-seeking. Years removed from those events and stationed on the distant frontier in a thankless task - the older Kirby is exhausted. After another patrol chasing Apache renegades back across the Rio Grande river, Kirby sees his position as a waste of men, time, and resources. He chases the Apaches away - they come back - then he chases them again. It's a job without an end. This career he chose has kept him away from his family for over 15 years and now he's questioning if it was all worth it.

When his son Jeff arrives on the post, he has a chance to right a wrong and reconnect with his child - but he can't do that the way he wants to. He's his son's commanding officer and must treat him like any other young recruit. One of John Wayne's best scenes of the film - and I'd argue for most of his films - is when he meets Jeff face-to-face, but not as father and son but as commanding officer and recruit. It's a stern and nearly belligerent exchange between the two, but they find their common ground. And as soon the recruit Trooper Yorke is out of sight, he's able to stop being an officer and take genuine fatherly pride in the man Jeff has become.

For an action-focused western with plenty of shootouts and high-stakes suspense sequences, Rio Grande is a movie with a lot of heart. In my opinion, this is one of Wayne's best dramatic turns. While he's the man in charge of the action as a commanding officer, he's almost always the last to draw a pistol and fire. It's a job left to the younger men of the company - and actors for that matter. This movie is billed as an action film and it delivers on that promise - but it's also a great romance. John Wayne and Maureen O'Hara started their five-film cinematic love affair with Rio Grande.

While they peaked together with John Ford's The Quiet Man, their chemistry for their first outing here is undeniable. When we first meet Kathleen, she's bitter and angry that her son has followed his father to the end of the earth. She's hardly heard from him in over fifteen years. She's coming into the scene as if she's been abandoned, that her husband and now her son would rather be anywhere else but home with her. She quickly learns that's not the case. A simple scene where she discovers a music box of obvious importance in his chest begins her change of heart. They share many great scenes together but that first meeting after years apart where they're straining to say everything they've held onto for so long is gold.

As far as the numerous John Wayne and John Ford films go, Rio Grande is in the top tier in my book. While I still hold The Searchers as the finest film they made together - and in general one of the very best Westerns ever made, this one is up there. Maybe just behind Stagecoach. Of the "Calvary Trilogy" I think it's the best of the three with Fort Apache riding in at a close second place. She Wore A Yellow Ribbon is a fine film, I enjoy it, but something about it doesn't quite resonate as strongly.

Rio Grande is one of the few favorites of mine that I suspect I can count on just one hand how many times I've seen it. Something about this one prevents me from pulling it off the shelf unless it's at a time when I can truly punch out with my day and focus on it. Shot throughout Moab, Utah and parts of Arizona, it's a beautiful film with vivid location photography. It feels like the ends of the earth and while there are paved roads running through that area today - when you visit Moab these locations still feel as remote as photographed in this film. This is a genuinely excellent film, and one of my personal favorites of the Ford/Wayne entries. I always find new little things to appreciate every time I watch and this round was no different.

Rio Grande arrives on Blu-ray as a new member of the premier Olive Signature label in a single-disc release with deluxe packaging. Pressed on a Region A BD-50 disc, the disc is housed in a clear case with a book-style paper slipcover that holds the case very snuggly. Included is a booklet with an essay by Paul Andrew Hutton that's well worth a read. The disc loads to a static image main menu with traditional navigation options. 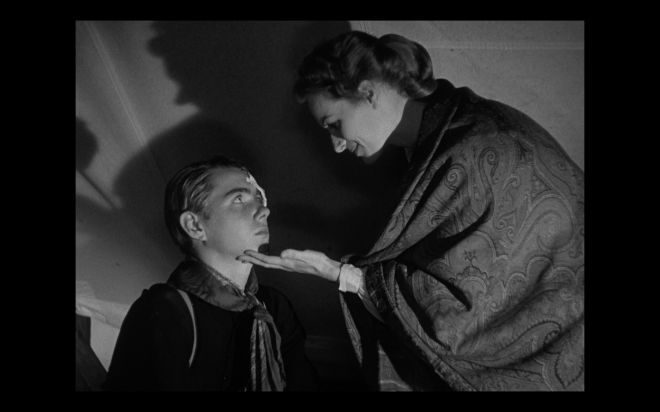 Eight years after its first release from Olive Films, Rio Grande earns a new upgraded transfer reportedly sourced from a "New High-Definition Digital Restoration." What that restoration entails is a mystery, I haven't located information about who, where, or when the work was done or what elements were involved but this is a clean and clear upgrade over the previous release from 2012. When the 2012 disc came out, I checked it out from the library and I thought it looked okay, but it didn't blow my hair back. I thought the grain field was chunky looking and the details weren't that sharp. It was certainly better than the DVD I already owned but not so much that I needed to replace it.

This is the version of the film worth owning - and subsequently replacing if you already have it and long for an upgrade. The first thing I noticed was a much more organic, less clumpy grain field. As follows, I thought details were much more richly defined. Facial features, the costumes, and especially location details all look clearer. This is also a darker presentation by a stop of two - but not in a way that distracts but pulls the bright whites in line without blooming and giving the deep shadows a stronger presence. Image depth is appreciable throughout. There are a few faint scratches, they almost look like folds or creases in the film, but they're few, far between, and don't last long - otherwise, damage to the image is minimal at worst. All in all, this is a very pleasing presentation. 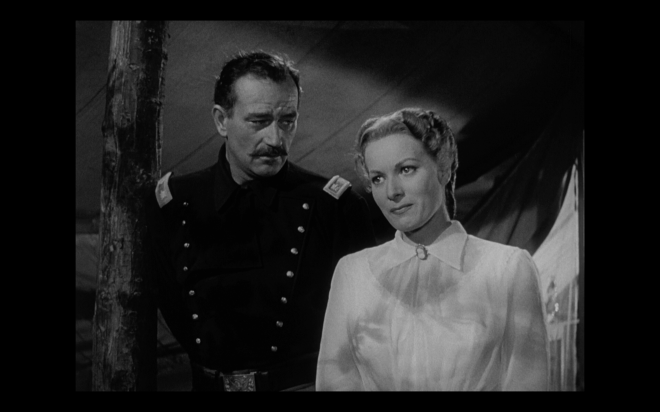 Rio Grande enjoys a generally splendid DTS-HD MA 2.0 audio mix. Sadly due to COVID issues, I wasn't able to check out the old 2012 Blu-ray from my library again to compare, but this new 2.0 track is solid stuff. It hasn't been overworked or rejiggered too aggressively to separate from the previous mono only release. The Victor Young score still sounds fantastic. Dialog is clean and clear throughout. Element spacing is lively - especially during the key action sequences - the early scene where the new troopers are riding horses on the obstacle course is a great showcase of distance, but the big final battle is a great sequence with horses, bugles, gunfire and screams. The mix is clean and clear without hiss or age-related issues. 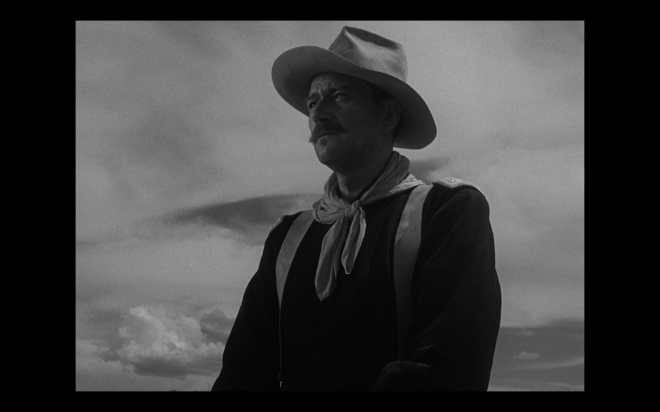 In addition to a great A/V presentation, Olive Films delivers a worthwhile bonus features package with a great audio commentary by Nancy Schoenberger followed with about an hour of new and archival interviews and documentary materials. The interviews with Claude Jarman Jr. and Patrick Wayne are a highlight - nice seeing the man who played John Wayne's son and John Wayne's actual son interviewed for this film.

Rio Grande is one of the finest westerns ever made - in my opinion. I would certainly argue there are better entries in the genre, but this one always stands out for me. John Wayne probably won't be remembered for his dramatic work, but a few characters in his career shine and this is one of them. It's refreshing to see Wayne not simply rehashing his traditional action hero persona but trading in for the contemplative man at the end of a long career. He's still the star. He's still a man of action, but he's not the first one to grab a rifle. Olive Films returns to the well giving fans a reason to upgrade from Olive's previous Blu-ray release from 2012. With a new and improved A/V presentation, this film looks and sounds better than ever. On top of that, there's a great collection of bonus features to pick through making this a worthwhile entry in the Olive Signature Collection. Highly Recommended.