Dr. Stephen Strange was one of the most gifted surgeons in medicine before his hands were left shattered and useless as a result of a car crash. Spending his fortune in pursuit of a way to fix his fractured body, the dejected doctor believed all was lost until the Ancient One offered him hope and healing in Tibet. Training mind, body and soul with the Ancient One and his pupils, Doctor Strange's scope, power and compassion grows as he steps closer to his mystical fate. But to fully embrace his destiny and protect the worlds of magic and reality, Strange must face betryal, death and the emergence of Dormammu.

In 2006, Marvel Animation Studios began releasing a series of direct-to-video feature films with 'Ultimate Avengers,' a reboot of the Avengers mythos with heavy nods to the comic book roots of the characters. That first 'Avengers' film fell headlong into a whirlpool of fan outcry and support -- some loathed the animation style, while others cheered the introduction of their favorite characters to feature-length animation. Since then, Marvel has produced several more animated features, including 'Ultimate Avengers 2,' 'The Invincible Iron Man,' and their most recent release, 'Doctor Strange.'

The film itself tells the tale of Dr. Steven Strange (voiced by Bryce Johnson), a gifted but arrogant surgeon who loses the use of his hands after a horrific car accident. As his career falls apart, he decides to search the world for a way to fix his hands and return to his former greatness. His search leads him to a mysterious man named Wong (Paul Nakauchi), a monk who brings the doctor to Tibet to meet an ancient warrior called the Ancient One (Michael Yuma). Once there, Strange begins to train with Mordo (Kevin Michael Richardson), an underling who seems distracted by his own power and abilities. It is here that the doctor comes to realize there is a war brewing just beyond the realm of our perceived universe that he's drawn to join. As Strange sheds his ego, he grows to understand his destiny and true purpose in the world.

But Mordo is more than he seems -- his jealousy and envy lead him to partner with a demonic entity called Dormammu (Jonathan Adams), an evil spirit using innocent children to create a gateway which will allow him to enter our world. Dr. Strange and the other mystic warriors must combat this mounting evil, stop the traitorous Mordo, and prevent the demon from consuming the planet.

Dr. Strange isn't a character that will be very familiar to people outside of hardcore comic fandom. As Marvel's "sorcerer supreme," Strange is responsible for defending Earth from inter-dimensional, mystic threats that bombard our reality on a regular basis. His rare appearances are packed with backstories upon backstories and he certainly isn't the most accessible character in the Marvel universe. The animated film wisely sidetracks the complicated nature of the character in his modern state and presents a streamlined origin story that should appeal to fans and newcomers alike.

Story-wise, the film is easily the best of the direct-to-video features Marvel Animation Studios has released and I was impressed with its dark overtones and thematic maturity. Even better, in what's sure to be a relief for fans, the story largely sticks to its source material. The result is equal parts manga and "Hellboy," and should serve as a welcome introduction to a second tier character that most people haven't had the pleasure of meeting. I personally found the Asian influences in the film's design to be a breath of fresh air that set a consistent tone throughout the film -- something that Marvel's other direct-to-video features have sorely lacked.

But while the manga influences make the character designs more appealing, overall the film suffers from a series of other quality issues that have plagued its predecessors. The animation style is weak, choppy, and inconsistent -- frankly, it doesn't even stack up to the majority of cartoons on TV. The CG elements are even more distracting, and often seem to be employed simply to offset the inadequacies of the animation department. While some of the CG models seamlessly blend with the rest of the animation (Strange's sports car, for instance), others had me shaking my head in dismay (the swarm of flying creatures at the end of the film being a prime example). The voice work, as well, often made me wince -- Dr. Strange and the Tibetan warriors are decent enough, but Dormammu and other supporting characters are often laughably voiced.

Although I managed to look past these inadequacies in order to enjoy the film at the level I did, in the end, they prevent me from fully vouching for it. On one hand, 'Doctor Strange' is invigorated by its storyline and characters, but on the other it's hindered by the lackluster quality of its presentation. Your own overall enjoyment of the film is likely to depend on which of these elements is most important to you. 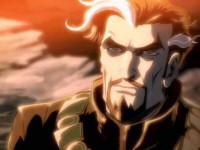 Even putting aside my dissatisfaction with the animation itself and focusing specifically on the technical qualities of this high-def transfer, I still came away from 'Doctor Strange' shaking my head. To its credit, colors are vibrant, contrast is dead on, and (as you would expect) there isn't a hint of grain.

That being said, there are several debilitating problems with this transfer. First off, color banding is more prevalent on this release than any other I've reviewed, and it seems to constantly ruin the sheen of this 1080p, AVC-MPEG-4 transfer. The banding comes in a variety of forms -- static banding inherent to the hand-painted background images (most evident in the sky or on walls), effect banding (just look at any instance of smoke or fog), and transparency banding (keep your eyes on higher quality frills like the fire around Dormammu's skull). I tried to find a single scene in the film that didn't have some sort of banding present in the image and failed to do so.

This high-def presentation also exposes some seams in the animation that aren't nearly as evident in the standard-def DVD. Specifically, the hand painted backgrounds are occasionally pixelated and distorted, the linework is generally sloppy (with colors often bleeding beyond character edges), and -- worse still -- line thickness varies from shot to shot, changes colors, and doesn't always line up. While these clearly aren't technical problems with the transfer, I mention it here because they are significantly more noticeable in high definition (especially on larger screens).

All in all, the issues with this transfer are so noticeable that it can't even live up to the problematic video quality of 'The Ultimate Avengers Collection.' I expect a lot more from 1080p animation -- hopefully Marvel Studios can get their act together and drop my jaw with their next outing. 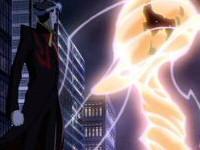 Unlike Marvel's earlier Blu-ray release of 'The Ultimate Avengers Collection,' 'Doctor Strange' doesn't include an Uncompressed PCM 7.1 track. Instead, this one features a DTS-HD Master Audio 7.1 track that current Blu-ray players are incapable of fully decoding. As a result, the track is automatically downsized to a DTS mix (1.5 Mbps). Flipping between this neutered monster and its companion Dolby Digital-EX 5.1 track (640 kbps), I could hardly discern the difference. Sure, the bass is a tad fuller and the treble ranges are crisper -- but it's not the level of improvement most will notice, and it pales in comparison to the overwhelmingly boisterous PCM track on 'The Ultimate Avengers Collection.'

Still, the DTS and Dolby tracks produce a sufficiently above-average mix for the film. Character dialogue is clear and stable, explosions use the subwoofer to full effect, and magic shoots across the soundscape with subtle channel movement. The rear speakers are given a welcome workout and the soundfield is packed with ambient effects. My only quibbles (aside from the choice of format) are with the constraints of the sound design -- dialogue sounds thin compared to other environmental effects, and the effects themselves sound stagey. That being said, these are common problems with lower budget animation and don't reflect on the technical quality of either track.

All things considered, this is a fine track, and one that's likely to be improved when technology catches up and the Master Audio track can unlocked. For now, though (based on the audio on 'The Ultimate Avengers Collection'), I can't help but think that a PCM track track would have made for a better short-term audio experience. 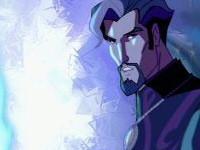 This Blu-ray edition of 'Doctor Strange' includes all of the special features found on the concurrently-released standard DVD, and happily they're presented here in 1080i high definition.

The bulk of the supplemental material (and arguably the best feature this disc has to offer) is a collection of CG animated shorts produced for recent Marvel video games. A "Best Of" montage (3 minutes) allows you to watch a music video that showcases quick clips of the entire collection, but you can also individually watch all of the CG shorts from "X-Men Legends 2" (9 minutes) and "Marvel Ultimate Alliance" (11 minutes). All of the shorts are fantastic, and I was left wondering why the design house behind these CG quickies isn't the company making full-length features for Marvel's animated properties. The only downside is that the technical presentation of these shorts is frequently marred by flickering white lines and resolution discrepancies.

Next up is "The Origins of Doctor Strange" (14 minutes), a thorough featurette that explores the comic book history of the Marvel character. While some time is spent with the animation studio, the majority of the video is comprised of interviews with creator Stan Lee and other comic book notables.

"A First Look at Avengers Reborn" (6 minutes) is a brief and unrevealing look at the next animated project from Marvel, 'Avengers Reborn.' From what I could gather, it's a light hearted futuristic tale with young, cartoony versions of the characters' children. Unfortunately, this featurette doesn't show one second of animated footage from the film -- it's just a talking heads piece with a lot of concept art. Calling this video a "first look" is definitely accurate.

Rounding out the supplemental package is a montage of "Doctor Strange Concept Art" (2 minutes) set to the film's score, as well as trailers for 'Ultimate Avengers 2' and 'The Invincible Iron Man.'

'Doctor Strange' is the best direct-to-video animated feature to date from Marvel Studios -- but that isn't saying much. While the storyline is a wonderful introduction to the characters, the stodgy animation and questionable voicework limit its appeal. Making matters worse, the video transfer on this Blu-ray edition is a mess, the audio mixes are simply ordinary (at least until DTS Master Audio is accessible on Blu-ray players), and the supplements are pretty slim. While it's still an improvement over the standard DVD, whether this one belongs on your shelf is likely to come down to your personal tastes in animation.

Sale Price 2.08
List Price 14.99
Buy Now
3rd Party 2.08
In Stock.
See what people are saying about this story or others
See Comments in Forum
Previous Next
Pre-Orders
Tomorrow's latest releases