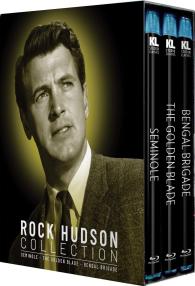 This collection includes three 1950s Technicolor adventure films starring screen legend Rock Hudson. SEMINOLE (1953) – From Budd Boetticher, the legendary director of Red Ball Express, Horizons West, Wings of the Hawk, The Killer Is Loose and 7 Men from Now, comes this action-packed western adventure starring Rock Hudson (Taza, Son of Cochise), Anthony Quinn (The World in His Arms), Barbara Hale (The Window), Lee Marvin (Monte Walsh), Richard Carlson (The Magnetic Monster), Hugh O’Brian (Ambush Bay) and James Best (Hooper). Seminole is a sweeping epic that reveals the Seminole Indians’ desperate fight for their homeland. Army officer Lance Caldwell (Hudson) is a Florida native with deep ties to the Everglades including a childhood friendship with a Seminole chief. As tensions rise between the military and the Native Americans, Caldwell turns to his old ally for help. However, when the chief is killed in cold blood, Caldwell finds himself accused of the crime. Desperate to prove his innocence, he risks everything in order to defend a rapidly disappearing way of life. Beautifully shot in Technicolor by the great Russell Metty (Touch of Evil, Spartacus, Midnight Lace). THE GOLDEN BLADE (1953) – Rock Hudson (The Tarnished Angels) stars with Piper Laurie (Son of Ali Baba) in this swashbuckling adventure yarn directed by Nathan Juran (Jack the Giant Killer). After vowing to his dying father to help establish peace in his homeland, Harun (Hudson) travels to Baghdad where he meets gorgeous Princess Khairuzan (Laurie) and uncovers a gold sword that only he can wield. When the Caliph’s scheming advisor, Jafar (George Macready, Gilda), concocts a plot for Khairuzan to marry his son, Hadi (Gene Evans, The Steel Helmet), it is up to humble Harun to prove his worth and save his royal love from a terrible marital fate. Filled with sword-fighting, romance and mystery, The Golden Blade is an unforgettable epic story of passion and loyalty, featuring future stars Anita Ekberg (La Dolce Vita) and Dennis Weaver (Duel) in minor roles. BENGAL BRIGADE (1954) – Screen great Rock Hudson stars in Bengal Brigade, a gripping adventure about restoring honor and self-redemption, directed by Laslo Benedek (The Wild One). Set in 1857 British India, Captain Claybourne (Hudson) is harshly disciplined for disobeying orders. Deeming himself unworthy of service and the love of his fiancée (Arlene Dahl, Sangaree), he announces his resignation from service. During his isolation, he discovers that his fellow servicemen are under attack by an anti-colonialist and rushes to their aid. Will he finally be given the redemption that he has longed for so long? The stellar cast includes Ursula Thiess (Bandido!), Torin Thatcher (Jack the Giant Killer), Dan O’Herlihy (100 Rifles), Arnold Moss (Border Incident) and Michael Ansara (The Pink Jungle).