Revenge is a dish best served with a grenade in Robert Aldrich's searing wartime drama Attack! starring Jack Palance, Eddie Albert, Lee Marvin, and Buddy Ebsen. When the cowardly commanding officer fails to back his men up, one of his best and bravest Lieutenants swears to make sure he never makes it home to the states. A rich drama about bravery, cowardice, and military bureaucracy offers intense action sequences with impressive performances from the lead cast. Kino Lorber Studio Classics delivers a great Blu-ray release with a solid A/V presentation. If you're game for a different side of WWII action, this is well worth checking out. Recommended.

A German machine gun placement on top of a hill should have been an easy target for the men of Fox Company. Lead one group of men up the hill taking the fire while another group flanks them. Simple. But Captain Cooney (Eddie Albert) fails to follow his best men, Lieutenant Joe Costa (Jack Palance) leaving dozens dead and forcing a retreat. With unit morale at the lowest, Lt. Woodruff (William Smithers) is pinched into trying to keep the peace. But when the Germans push an all-out attack  Lt. Col. Bartlett (Lee Marvin) orders Fox Company to take a small town, Costa lays it on the line - if Cooney fails to back his men up one more time, there's no way Cooney ever makes it back to the States alive.

Based on Norman Brooks' play Fragile Fox, Attack! is the type of war film that doesn't shed its stage roots. Interior locations have a grandiose aura where dialog is passionately delivered with brava crescendos designed to stir the emotions of the audience. On the battlefield, the action comes fast and intense with brave men running into incoming machine-gun fire or courageously staring down a Panzer with a grenade launcher. These sequences feel very much like two different films smashed together, but it's the pacing director Robert Aldrich brings to the show that makes these elements work cohesively. Whether the men are in the command office, waiting in line to get a cup of coffee, or trapped in a farmhouse under German sniper fire, there's an intimacy to the actors and their performances. When the men leave these confines, the action is large-scale and intense letting you forget this was originally based on a stage play.

And performances across the board are pretty fantastic. Jack Palance - before his weird 70s slump that saw him in some pretty bad movies - delivers an intense performance as Joe Costa. He lays everything on the line giving a great range physically and emotionally to a character that is essentially the heart of the film. Eddie Albert is another standout as Cooney. Growing up I knew him because of Green Acres and not at all as a dramatic actor but over the years I discovered he could carry a scene with impressive range. He's particularly effective here in Attack! as a simple man who didn't want to fight, who's afraid to die, but is stuck in a position of authority simply because his father is an important political figure. 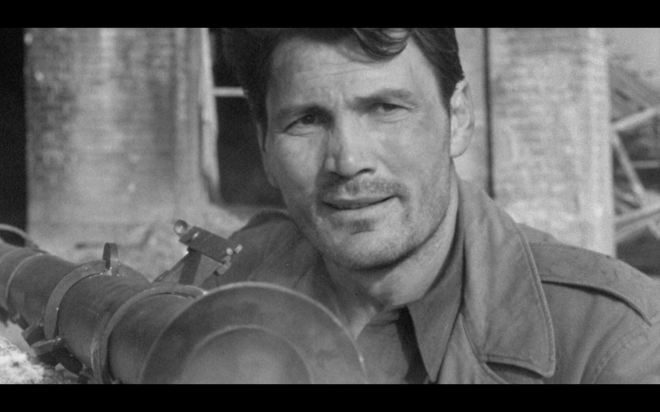 Then we have Lee Marvin in the one action movie I think where he doesn't have a machine gun! Marvin certainly has a long list of action-packed credits to his name, but here, there's something almost sinister about his Lt. Col. Bartlett. As a commander, he has a job to do and make sure the men under him do it. However, he's not thinking about the battle at hand or the war tomorrow, he's thinking about his career after the war and what benefits him most. Caught in the middle of this power struggle is William Smithers' Lt. Woodruff. Trying to keep the peace has put him a position of distrust on both sides forcing a powerful moment of conscience.

Made on a shoestring budget and without any help from military advisors or equipment because they didn't like the script - Aldrich crafts a suspenseful character study of men under pressure outside and in. Each man in the film has their own demons of right, wrong, and true justice. Bravery isn't always being ready to run towards the bullet but standing firm and doing the right thing regardless of the consequences. It's a hell of a show. It can feel a little stagey at times, a little stilted, but Attack! is a war film with a lot of guts.

Attack! arrives on Blu-ray courtesy of Kino Lorber Studio Classics. Pressed on a Region A BD-50 disc, the disc is housed in a standard sturdy keepcase. The disc loads to a static image main menu with traditional navigation options.

Attack! arrives on Blu-ray with an overall striking image transfer, that has a few occasional hiccups. I'm no sure of the vintage of the 1.85:1 transfer or the elements used, but it appears that some inserts from different sources may have been cobbled in for the master this transfer was struck from. There are moments - interior and exterior - where this image is just drop-dead gorgeous offering vivid details, a beautiful grayscale, with natural grain to give a genuinely pleasing film-like presentation. Then there are the random shots, even within the same scene as some of the beautiful footage where the image becomes notably softer, the grayscale less refined, and takes on a flatter appearance. This isn't a dealbreaker by any means, the transfer is very good for a near-70-year-old film. Most of the film looks terrific as if it hasn't aged a day. Then there are the segments within the same scenes and locations where the quality takes a notable shift.

Attack! also comes packed with an active and engaging DTS-HD MA 2.0 audio mix. As a dialog-heavy film, most of the activity is focused on the actors. Interiors, where the more staged dialog and dramatics unfold, offer a little less nuance and atmospherics. War sequences really open that up giving an intense soundscape to enjoy with machine gun fire, artillery explosions, and the guttural rumble of tanks rolling up narrow streets. The mix is free of any serious age-related issues, some slight hiss is present but that's almost a non-issue as the only time you ever hear it is when someone isn't talking. All in all a clean and effective mix.

Unfortunately, Attack is void of any meaningful bonus features. I would have loved a film historian-fronted commentary but alas all we have here is the traditional KLSC collection of theatrical trailers.

I honestly didn't know what to expect with Attack! when I sat down to watch it. When you read a cast of character actors for a war film that includes Jack Palance and the lead stars of Green Acres and The Beverly Hillbillies - you're not altogether sure of what the hell you're getting yourself into. Attack! proved to be an intense and rewarding film. I'd heard of the play it was based on, Fragile Fox, but I had no idea this was an adaptation. While elements can be a bit stagey, the performances from this great cast overcome any stiffness of the dialog and combined with Aldrich's command of combat action, this a solid piece of work. Kino Lorber Studio Classics delivers a worthwhile Blu-ray release with a solid A/V presentation. If you're a fan of the classics, this one is worth the time. Recommended