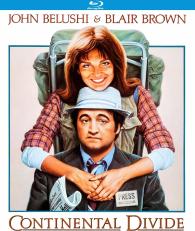 Chicago reporter Ernie Souchak (John Belushi) is beaten up by double-dealing police officers after he writes about an unethical city councilman. Hoping to keep Ernie safe, his editor, Howard McDermott (Allen Goorwitz), tells him to head west. In Wyoming, Ernie strikes up a romance with bird scientist Nell Porter (Blair Brown), but as soon as he goes home, he's drawn back into city politics. With Nell about to discuss her research in Chicago, this might be the couple's last chance to reunite.