Perry Mason gets an origin story, but does the famed fictional defense attorney really need one? Though atmospheric, well acted, and sporadically intriguing, HBO's eight-episode Perry Mason series wears out its welcome long before its unsatisfying denouement, thanks to too many tangents and themes that cloud the central mystery and dilute the impact of Matthew Rhys' strong portrayal of the eponymous character. Fewer episodes and more focus would have made this neo-noir series, which looks and sounds great on Blu-ray, more involving, but if you're a fan of period dramas and legal intrigue, Perry Mason: The Complete First Season is worth a look. (Note: Warner Bros. Home Entertainment provided High-Def Digest with a free copy of the Blu-ray for review. The opinions shared are solely those of the reviewer.)

Origin stories are all the rage these days. Everyone, from Marvel and DC superheroes to One Flew Over the Cuckoo's Nest's Nurse Ratched, seems to be getting one, but whether these before-they-were-famous look-backs are necessary - and whether they end up tarnishing the images of the icons they examine - remains open for debate.

One debate worth having is whether Perry Mason, the popular criminal defense attorney immortalized by Raymond Burr in the eponymous TV series that ran for 271 episodes from 1957 to 1966, merits an origin story, let alone one that runs eight hours and presents an image far removed from Burr's stiff, upstanding portrayal. Apparently, HBO thought so and liked the idea of knocking Perry off his pedestal, stripping him of his tailored suits (and most of his scruples), and casting him in his very own film noir.

Perry Mason may be set in the 1930s, but the digital color photography, graphic sex and violence, and provocative underlying themes are straight out of 2020 and provide a stark and often puzzling contrast to the far more sedate black-and-white TV series. If you're looking for the "Perry Mason moment" - that weekly shocking revelation that tidied up a messy murder case, led to the apprehension of the killer, and became part of our national lexicon and courtroom culture - you won't find it here. In fact, this new eight-episode HBO series links itself so tenuously to the legendary lawyer created by novelist Erle Stanley Gardner, its biggest mystery is why the producers decided to name it Perry Mason at all. Evangelism, racism, feminism, homosexuality, and police corruption are only a few of the themes woven through this sporadically interesting series that sputters along like the old-time automobiles on the streets of Depression-era Los Angeles where the story transpires. The kidnapping and killing of a baby (inspired by the Lindbergh case, perhaps?) drives the plot, which often veers off onto tangents involving such thinly veiled real-life figures as silent movie star Fatty Arbuckle and faith healer Aimee Semple McPherson.

When we first meet Perry (Matthew Rhys), he's down-trodden, lost, and depressed. Haunted by the horrors of World War I and isolated after his wife and son leave him, the disheveled, boozy Perry ekes out a living as a sleazy private investigator who snaps pictures of people in compromising situations, then tries to extort them. The baby-killing case stokes his interest, and when he joins up with aging attorney E.B. Jonathan (John Lithgow), who represents the dead child's implicated parents, and his sassy assistant Della Street (Juliet Rylance), Perry embarks on a winding path to redemption.

The convoluted case takes many twists and turns, but none are particularly shocking, and when we finally get to the courtroom in Episode 6, the theatrics are tepid at best. Watching an inexperienced Perry, who we discover cheated(!) on the bar exam to earn his law degree (talk about disillusionment!), masterfully defend his client in the trial of the century is a bit hard to swallow, and all the evangelism nonsense needlessly bogs down the drawn-out tale, which could have - and probably should have - been cut in half. If the series allowed Perry to tackle a couple of cases instead of just one, it might have better sustained itself over its eight-hour running time. 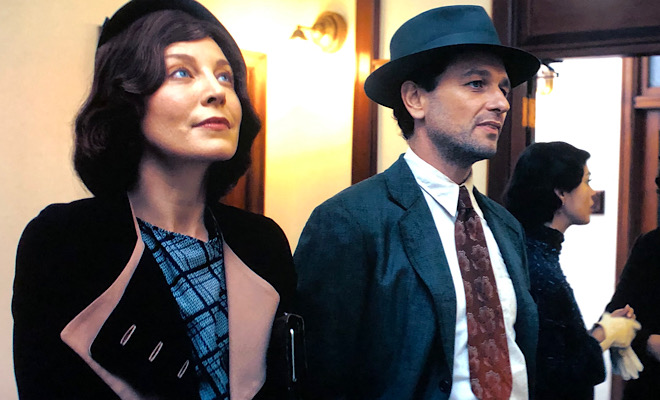 A squeaky-clean Perry would be difficult to accept in this corrupt day and age, and the very talented Rhys embraces all of the rebooted character's myriad faults and frailties with customary relish. (Personally, I think this Perry is overly flawed, but going overboard seems to be the series' modus operandi.) Though Della was merely a dutiful secretary in the original TV show, she's a force to be reckoned with here, blazing trails in both her professional and personal lives. Rylance tackles the part with aplomb, but while Della's empowerment, along with that of a black police officer magnetically played by Chris Chalk, may be inspirational and strike a chord today, they don't particularly reflect the tenor of 1930s L.A. Tatiana Maslany vividly portrays flamboyant evangelist Alice McKeegan and Gayle Rankin impresses as the dead baby's grieving yet duplicitous mother.

The premiere episode overdoes the neo-noir tone, but the recreation of the brutal Battle of Argonne is especially affecting, the production values and attention to period detail throughout are excellent, and all the fine performances keep us engaged. The whole series, however, just never adds up to the sum of its parts. The murder case becomes tiresome and the payoff isn't commensurate with all the time we're forced to invest to see it through. Perry Mason has already been renewed for a second season, and the finale lays the groundwork for subsequent storylines. Let's just hope Season Two is tighter, more plausible, and more focused than Season One. Perry Mason: The Complete First Season arrives on Blu-ray packaged in a standard case inside a slipcase. Two discs are included, as well as a leaflet that contains the digital copy code. Video codec is 1080p/AVC MPEG-4 and audio is DTS-HD Master Audio 5.1. Once the discs are inserted into the player, the static menus with music immediately pop up; no previews or promos precede them.

The DTS-HD Master Audio 5.1 track pumps out dynamic, enveloping sound that thrusts us into Depression-era Los Angeles. Surround effects are noticeable, with chirping birds, rain, plane engines, crowd noise, and battle sounds providing directional and atmospheric accents throughout the series. Subtle details come through well, although the faint crackling of cigarette paper whenever anyone lights up or takes a drag becomes annoying over time.

Strong bass frequencies supply some oomph now and then, the rather drab Terence Blanchard music score fills the room with ease, and all the dialogue is well prioritized and easy to comprehend. Distortion is absent and no imperfections creep into the mix. Overall, this is a strong track that nicely complements the action and enhances the period mood.

A couple of brief promotional supplements are included on each disc.

This is not your father's (or grandfather's) Perry Mason, and whether that's good news or bad news depends on your perspective. One thing, though, is certain: The first season of HBO's new series invents a fanciful backstory for the famed fictional defense attorney that doesn't quite fit the image fashioned by Raymond Burr, but plenty of neo-noir style, historical detail, and a stellar Matthew Rhys performance mask the show's myriad shortcomings. Extras are slim, but top-notch video and audio transfers distinguish Warner's Blu-ray presentation. Though I found the series a bit tedious and the story less than satisfying, there are enough intriguing elements on display to make Perry Mason: The Complete First Season worth a look.