Eddie Murphy stars as a street-wise L.A. private detective tasked with rescuing a mystical child from the clutches of evil in The Golden Child. An attempt at a more family-friendly Murphy movie, its tone is all over the map as it can't quite decide if its a comedy, a character drama, or a supernatural action adventure. It's still fun but not Murphy's best 80s effort. The 11th entry in the Paramount Presents line, The Golden Child finally gets a Blu-ray release with a great A/V presentation and some slim bonus features. If you're a fan of the flick, this is a solid release. Worth A Look

Private Detective Chandler Jarrell specializes in finding lost and runaway children. It's his zeal for his work that he soon discovers he's in fact the Chosen One - a man who is impure but good and can protect The Golden Child (J.L. Reate) from the forces of darkness lead by the evil demon Sardo Numspa (Charles Dance). With the help from Kee Nang (Charlotte Lewis), Chandler may just have a chance to fulfill his destiny and save the child - and the world.

When you break down the plot of The Golden Child - it's a pretty sound example of overcooked Hollywood high-concept filmmaking. Take a little bit of supernatural mysticism of the Indiana Jones franchise and spin in some noir-ish detective tropes and you have yourself a movie. But then they decided it also had to be an action-comedy on top of that. At one point this was a Mel Gibson vehicle that a variety of directors including John Carpenter attached to direct. Mel Gibson left for Lethal Weapon. John Carpenter bugged out for Big Trouble In Little China. Instead of jumping on board of the time-traveling antics of the starship Enterprise with Star Trek 4: The Voyage Home, Eddie Murphy decided to stretch himself a bit and signed on for this with Michael Ritchie directing.

By all accounts, this was a smooth production until the very end. After some shaky test screenings, Paramount ordered reshoots to make the film more like everything else Eddie Murphy has made - especially Beverly Hills Cop since it was such a huge hit. As a result, The Golden Child is a shaky mishmash of elements. There are numerous moments where the film is pretty straight and to the point but also offer Murphy some moments for genuine character comedy as a man in way over his head. Then there are some very obvious reshoots where it's just joke after joke and feels terribly out of place - and honestly not that funny. It's not complete tonal whiplash, the film survives, but just barely. I've only read some excerpts of the original shooting screenplay and it felt like a different movie that was much more sure of what it was. The finished product feels very stitched and tinkered with.

Growing up, The Golden Child was pretty much the only Eddie Murphy movie I was allowed to see for a long, long time. Even though I could watch any number of rough and violent R-Rated movies in our family's tape collection, Murphy's comedies were always on the fringe. As such, The Golden Child is an old family favorite that my Dad would rent pretty regularly. It was reliably fun and had plenty of action with some horror stuff that didn't scare the crap out of me or my sister.

Watching this film today is a nostalgic treat, but it's not entirely rose-colored glasses. I still think the film is fun and I get a lot of entertainment value out of it, but I can feel the reshoots more and the odd clashes in tone. The first half of the film works so well, you get some great setup for an interesting supernatural thriller - that just so happened to star Eddie Murphy. By the time the second act kicks in and the plot is cooking, you can feel the movie drift into being an Eddie Murphy comedy that also happened to be a supernatural thriller. 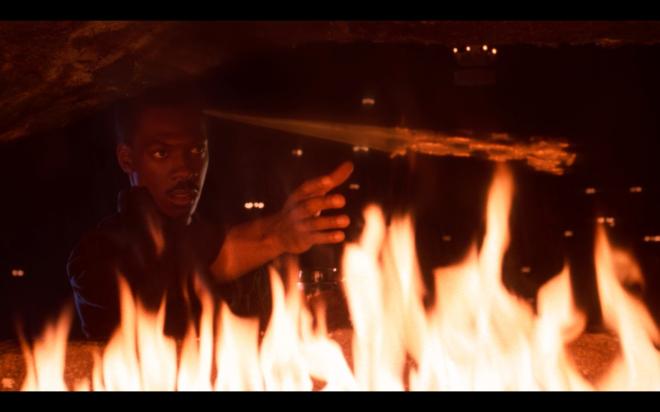 All credit to the cast for giving it their all. Charlotte Lewis stars in only her second feature outing and she gives a strong supporting performance without being a character coasting on her beauty or just be a damsel in distress. Charles Dance is a great villain and is plenty creepy in all the right places. To this day I remember watching Alien 3 in the theater with my Dad and instantly recognizing Sardo Numspa! Then you have Murphy himself who you can see is really working hard to make something different for himself with this film. His early investigations trying to find a young girl that's gone missing is a clear example of Murphy stretching as an actor while also keeping some of his trademark humor around.

All in all, this is still a worthwhile movie. It's not Murphy's best, nor is it his worst. Of his 80s work, it's probably not the one I would pull out of the bag first to point to for the man's talents. Granted I do wish it held up better today compared to my childhood memories, but I'm glad to see this one get a proper Blu-ray release. I didn't dust off my old DVD very often but I'm glad I can finally retire it.

The Golden Child finally arrives on Blu-ray as the eleventh entry in the premier Paramount Presents Blu-ray line. Pressed on a BD-50 disc, the disc is housed in a typical clear plastic case with a slipcover that opens to reveal the classic theatrical poster artwork. The disc loads to a static image main menu with traditional navigation options. The included Digital slip is not Movies Anywhere compatible but can be redeemed on AppleTV, VUDU, or FandangoNow. 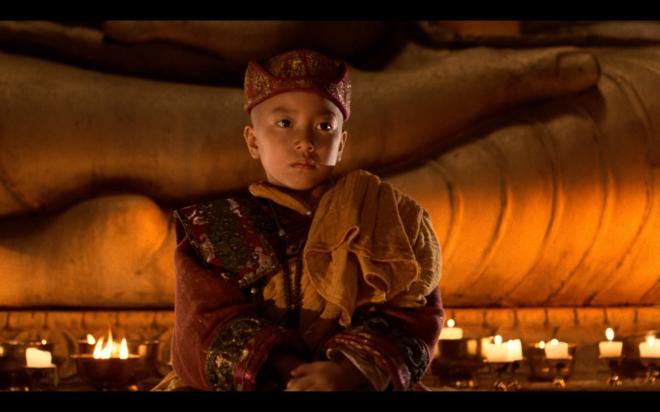 For its first outing on Blu-ray, The Golden Child makes a good first impression easily besting the far too old DVD. Right away you can appreciate fine details in facial features, clothing, and the production design. This is a pretty intricately-designed film so there's always a lot to see. From the house with all of the evil writing on the walls to the set work done to bring Tibet to life, this image is pretty damned impressive. I felt like I was seeing a lot of details in the makeup work as well that I'd never noticed before.

There are a few soft spots here and there where it just looks like someone didn't pull the focus at the right point. Footage surrounding optical effects can be a tad dodgy, thicker film grain or appear a bit softer - when Chandler sees a vision of the Golden Child in the trees in his back yard is an example, or the blue screen work for Hell when Sardo has a confab with the devil - it's a cool shot but the limitations of technology at the time show their age. But those are cooked in examples that can't really be "fixed" but show all the more with this new 4K restoration effort.

Colors are bold with that 80s flash with plenty of bright primaries for the L.A. sequences but then some deep beautiful reds, blues, and yellows when the movie moves to Tibet. Film grain is intact with a healthy natural presence, and as I mentioned above only ever becomes slightly noisy. As a recent restoration effort, the elements are in great shape without any outward signs of age or speckling. 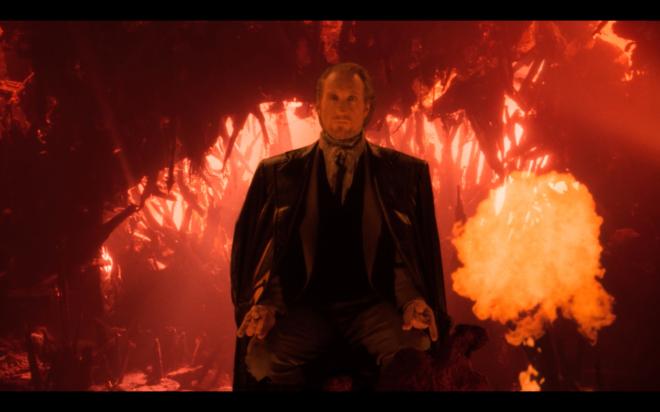 The Golden Child is also blessed with a robust Dolby TrueHD 5.1 mix that is impressively active and engaging. There are a lot of quiet-ish conversational moments and the soundstage can be more front/center channel focused, but there are enough surround and rear hits to give the mix a sense of immersion without sounding like it was purposefully pushed or altered for this release. From the L.A. streets to the village in Tibet, everything sounds natural. The dream sequence is a main highlight, but just about anytime some big action hits it pops beautifully. The last act is pure action and sounds terrific. Dialog is clean and clear - some flubbed mispronounced lines still remain which I've always found charming about this movie. Levels are spot on without any need for monitoring. 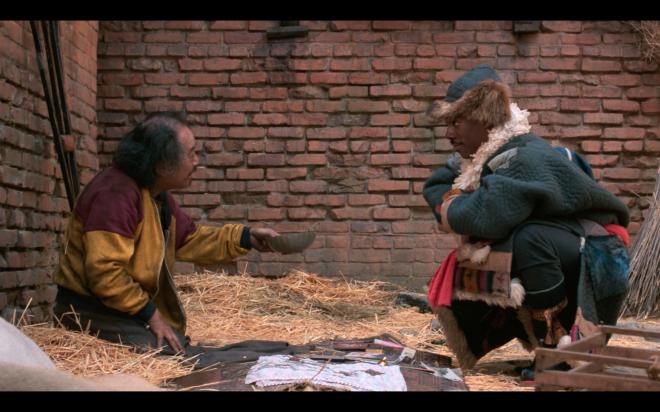 Bonus features are on the slim side of things for The Golden Child. Since Michael Ritchie passed away some years ago, there's obviously not one of the routine short director interviews. We get some small bits of archival EPK material that's been repurposed as something new, but that's it. As this isn't even one of Murphy's favorites I'm not surprised he didn't want to participate in any new interviews or a commentary.

The Golden Child may not be one of Eddie Murphy's best films - especially for his string of hits throughout the 80s, but it's still pretty good. I remember loving it a lot more as a kid than I do now as an adult. Stuff I found funny then feels dated or just not that funny. Parts of the film work really well giving Murphy a lot of room to test his range while other parts feel forced and expected for a movie with his name on the marquee. Even through its faults, I had a fun time reconnecting with this one. I realized it'd been most of ten years since I last pulled out my old DVD so I was overdue for a view.

Paramount has done right by this movie by not only finally bringing it to Blu-ray but also doing a damned good job while they were at it. Sure, a 4K UHD Blu-ray would have been appreciated considering the restoration effort, but for this film's first disc outing on HD, there's nothing to complain about here. The audio is on point giving an engaging experience. Bonus features are light, but considering we're talking about The Golden Child, I'm not going to be too picky in that department. At the end of the day, if you're a fan of this movie you can buy with confidence. This is the Blu-ray you've been waiting for. Worth A Look.