John Landis' classic holiday comedy Trading Places makes a new swap on Blu-ray as the 12th entry of the Paramount Presents label. This hilarious yarn of two men of opposite means swapped at the whim of a par of crooked brothers still lands the comedy belly laughs nearly 40 years after its release. Now with a gorgeous new transfer sourced from a 4K restoration and a more active and engaging audio mix - it looks and sounds better than ever. You may not have thought you needed another release of this film on Blu-ray, but this disc easily puts all past home video editions to shame. Highly Recommended.

Billy Ray Valentine (Eddie Murphy) gets by living on the streets of Philadelphia as a hustler pretending to be a wounded vet. Louis Winthorpe III (Dan Aykroyd) lives in a stately brownstone working as a commodities broker for Duke & Duke. The two men's lives are about to crash into each other when Randolph Duke (Ralph Bellamy) and his brother Mortimer (Don Ameche) make a wager about the intricacies of breeding versus environment. 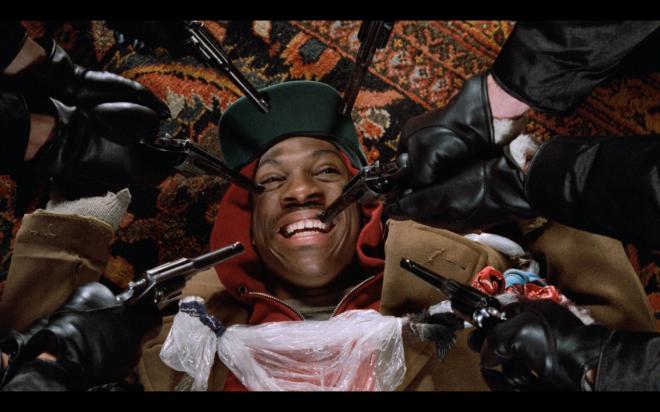 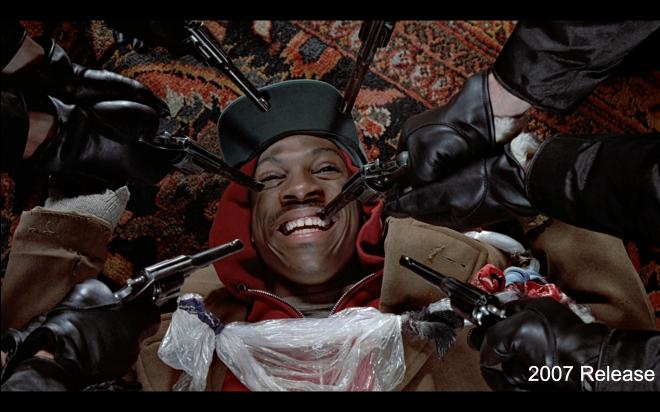 Trading Places isn't really a new plot if you break down what it's getting at. The Three Stooges essentially ran the same game in one of their 1935 short Hoi Polloi - and then again in 1947's Half-Wits Holiday. And then again in 1958 with Pies and Guys. A riff on Pygmalion - this film pits an upper-crust do-gooder against a street-wise hustler at the whim of two crooked brothers with more money than they can ever use in life fully believing they're better than anyone. John Landis, screenwriters Timothy Harris and Herschel Weingrod, and this excellent cast featuring a rising star Eddie Murphy, a pre-Ghostbusters Dan Aykroyd, Jamie Lee Curtis, Paul Gleason on top of classic film vets Ralph Bellamy and Don Ameche that makes this movie great.

It's also a Holiday Classic. In my house, you can't go through Christmas without at least one viewing of Trading Places - and even then it's also a New Years movie so you get another excuse to give it a spin. I first saw this movie on HBO when I was in my teens and old enough that my mom couldn't really object to the content of the movies I was watching anymore. Plus, as much as she'd hate to admit it at the time - she laughed at this one too. This movie is a pitch-perfect situational comedy. The antics just keep piling on top of each other until a fitting crescendo. Even when the movie is at its most ridiculous it never overplays its hand. Each gag just gets funnier and in true classic comedy form, it's always funny. Even the best lines still crack me up again and again. "Five dollars!" - Every time I hear someone being a cheap ass I roll that line out.

This movie has been around so long now with a devoted legion of fans, there's really no point in my talking any more about it. If you love the movie, it's the best time of the year to watch it. If you've never seen it, it's time to pop some corn, turn the lights down, and check-in for one of the best holiday comedies - let alone one of the best comedies of the 80s.

After several releases on Blu-ray - much like Airplane!, Paramount gives Trading Places another spin on 1080p Blu-ray as the 12th entry in their Paramount Presents premier label. Pressed on a BD-50 disc, this disc is housed in the standard clear case with slipcover that opens up to reveal the film's original poster artwork. Also included is a digital slip that redeems in HD. The disc loads to a static image main menu with traditional navigation options. 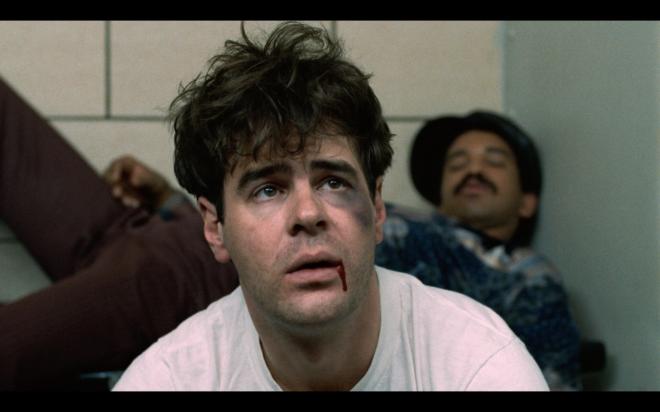 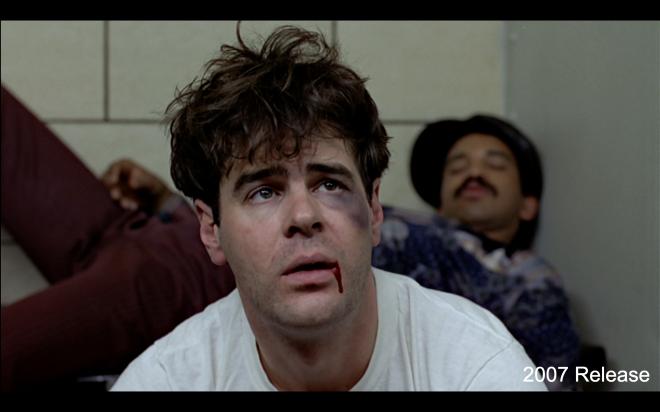 Trading Places never really had a great Blu-ray release. For that matter, it never really had a great DVD release. For a movie made in 1983 on a modest budget, it was just one of those comedies that was given a serviceable at best transfer. Now for its induction into the Paramount Presents line, Trading Places has been given a full 4K restoration effort supervised by John Landis - and the results are staggering. One of my ongoing sticking points with the Paramount Presents line is that actual 4K UHD Blu-ray releases are left out of the mix, Days of Thunder had two separate releases and I can't for the life of me figure why. This movie deserves a full 4K UHD Blu-ray release - it's the only way now it could look any better on physical media.

From the start the film enjoys a much more refined and detailed image. With Winthorpe's primping routine juxtaposed against the hustle and bustle of the average man running to work, you can immediately see and appreciate all of the great details in the Philadelphia locations. Facial features offer more texture and pigmentation, clothing offers clearer patterning, and the film's production design really comes through. Hell, I've been watching this movie now for over 20 years and this was the first time I noticed it was Giancarlo Esposito in the jail cell with Eddie Murphy!

Colors are also much more bold and lively with some really impressive primaries. The Christmas setting allows for a lot of great red, blue, and yellows to pop throughout the film. Skin tones are much more healthy and natural-looking compared to the previous Blu-ray that could make people look overly ashy and pale. Black levels are also greatly improved allowing for a much more natural inky presence without crushing. Whites are on point without any blooming that wasn't already cooked into the original photography. Elements are in great shape without any sign of speckling or scratches. Again, I'm bummed that there isn't a 4K UHD Blu-ray release for this new restoration, but I'll gladly take this and retire my old Blu-ray. 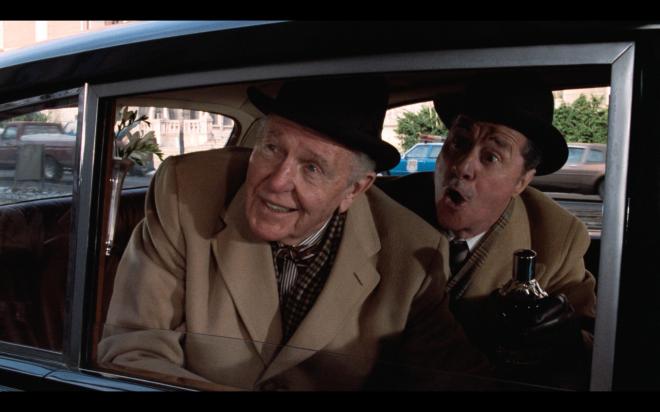 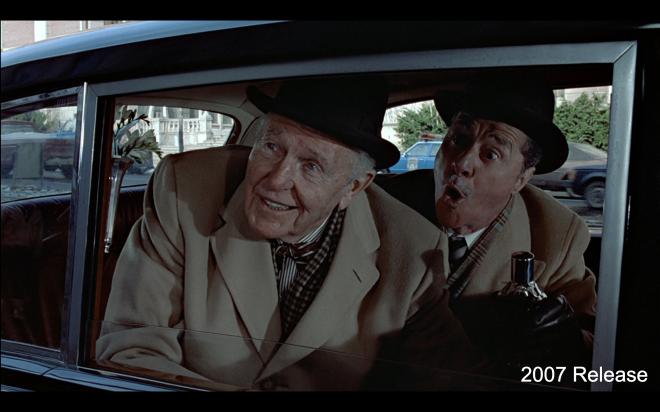 While not earning as massive an improvement as the video, Trading Places gets a bump with a new Dolby TrueHD 5.1 mix that manages to sideline the old Dolby Digital 5.1 track. This mix just feels much more alive. The film itself is still very front/center focused given its conversational nature, but I felt like key locations in the Philly streets or the stock exchange floor had much more range and presence to them with a very satisfying surround experience. Throughout dialog is clean and clear without issue. Again it may not be a leaps and bounds improvement but you can feel the difference where it counts most. 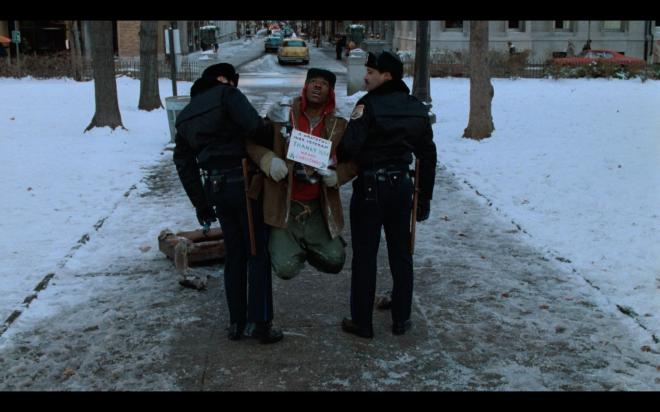 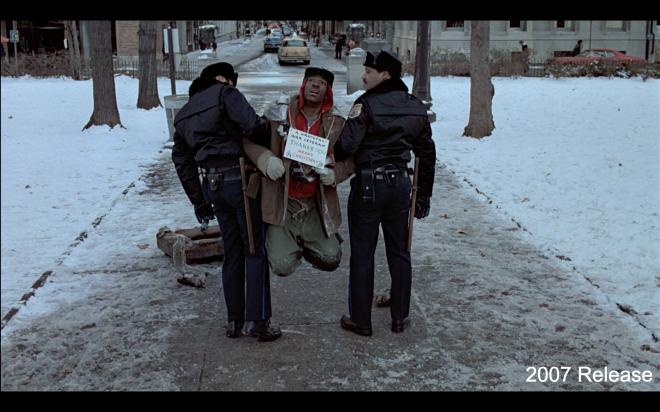 The bonus features package is largely all archival materials but we do get a couple of new ones. Once again we get a woefully too short interview with John Landis for a new Filmmaker Focus interview. He covers a lot of ground but a commentary would have been great, or give us something that lasts longer than just a few moments. After that, the film now includes an Isolated Score that's found in the Audio menu option. The only bonus feature that's omitted is the Trivial Pop-Ups, which really isn't that big of a loss since they mostly read like the stuff you'd find on IMDB anyway.

Trading Places is a true classic 80s comedy. John Landis was in peak form as a director that decade, but it's the stars Dan Aykroyd and Eddie Murphy hot off their time on Saturday Night Live that makes the film memorable. Toss in terrific supporting turns from Jamie Lee Curtis, Denholm Elliot, Don Ameche, and Ralph Bellamy and you have a film that never misses a punchline. As the 12th film in the Paramount Presents line, Trading Places finally gets the upgrade it long deserves with a 1080p transfer sourced from a fresh new 4K restoration that easily puts to shame the old transfer that's been floating around since 2007. Toss in a new audio mix and some great bonus features and you have a Blu-ray well worth upgrading for. Sadly a 4K UHD Blu-ray isn't on the horizon yet, but that's the only way this movie could look any better. Highly Recommended.