There have been many iterations of Sherlock Holmes since the 1880s in various forms and mediums, from magazines, novels, short stories, to television and film. More recently, the titular detective made waves on the BBC with a few seasons of Benedict Cumberbatch playing Sherlock that was critically acclaimed. Robert Downey Jr. and director Guy Ritchie teamed up and made two big-screen adaptions of the character as well, along with a smattering of network tv shows that take place within the Holmes universe. In 2006, author Nancy Springer wrote a series of young adult books that featured Enola Holmes, the 14-year-old sister of the adult Sherlock, now a famous detective, where Enola sets out on her own adventure to find her missing mother in the new stylized and fantastic film Enola Holmes. 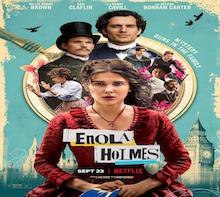 With an all-star cast including Millie Bobby Brown (Stranger Things) as Enola, Henry Cavill (Man of Steel) as Sherlock, Sam Claflin (The Hunger Games) as Mycroft, and Helena Bonham Carter (Harry Potter) as Eudoria Holmes (mother of the trio of siblings), this wonderful tale is witty, smart, full of thrills, and breaks the fourth wall as much as Deadpool would. Sitting in the director's chair this go-around is Harry Bradbeer (Fleabag, Killing Eve) with Jack Thorne (Wonder) penning the script that wastes zero time frolicking about with undesirable tangents. Enola Holmes starts off with a quick pace and never lets up until the final credits roll.

Right from the start, Enola is not the typical young lady. Instead of cooking, sewing, or acting like a proper girl of the time, Enola and Eudoria are pioneers and leaders of the feminism movement where women are their own person and deserve to be free from oppression based on their gender, where they both engage regularly in the arts, painting, outdoor activities, and of course, detective work and face to face combat. Certainly not the typical average day for a young woman who is meant to be at school learning how to be a lady. In fact, Enola didn't attend school but rather was taught by her eccentric mother and read all the books they had amassed at home and at the library, becoming smarter than most adults around her. One day, Eudoria vanishes and leaves young Enola a few clues on where she might have gone.

At this point, Sherlock and Mycroft head home to sort the situation out, where Mycroft demands Enola be sent to a boarding school, leaving Sherlock to reluctantly agree. Enola can't stay imprisoned for long as she escapes and sets out to find her mother, crossing paths with a boy named Lord Viscount Tewksbury who is more than meets the eye. The two have a fumbling relationship until assassins try and kill Tewksbury and Enola, resulting in a murderous and dangerous path to discover just how far up the royal chain this corruption goes.

This is very much Millie Bobby Brown's film to shine as her character never needs help from her older brothers to save or help her out. In fact, she can do her own fighting and bidding just fine as her mother taught her to do well. It's a girl-power movie through and through and a powerful, and a charming one at that. It never feels preachy or trying to force-feed a message every few minutes, but instead feels natural and organic in the point it's trying to make that relates to present-day politics all too eerily. With a mix of action-packed sequences, wonderful characters, comedic moments, and some genuine excitement, Enola Holmes is the perfect blend for this new adaption of the character set within an old universe. 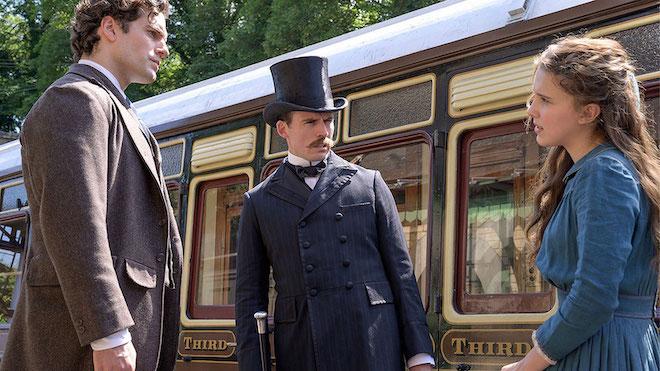 Millie is simply phenomenal as Enola, perfectly capturing the character's inquisitive, intelligent, and physical elements as she journeys into the big bad world of criminals. Claflin is a pitch-perfect, stern, mean older brother, while Cavill's portrayal finally lends some much-needed emotion to Sherlock as he genuinely cares for his sister, along with some slight amusing quips he throws out. Bonham-Carter is stellar in her small, yet pivotal role as she always steals the scene whenever she's in front of the camera. Enola Holmes is a superb thrill ride that hopefully spawns several more films.