Clint Eastwood scales new heights as an action actor and director in the spy thriller The Eiger Sanction. When the film works, it's a fun thrilling adventure with incredible stunts and photography. When it doesn't work, it slides into the kind of out-of-place camp humor that would rival a Roger Moore Bond film. Overall it's a ride worth taking but may not live up to every Eastwood fan's expectations. Kino Lorber Studio Classics lines up The Eiger Sanction for a splendid new release offering a new transfer, excellent audio, and a nice set of bonus features. Recommended

A secret agent has been brutally killed in the process of retrieving a roll of microfilm with a formula for a deadly bioweapon. In response, C-2 has called Dr. Jonathan Hemlock (Clint Eastwood) out of retirement. Moonlighting as a classical art professor, Hemlock has a long history as a deadly assassin who used his high-commission earnings to build a collection of rare artwork. Reluctant to take the assignment, Hemlock is compelled when he learns the agent killed was his best friend. The only clue to the identity of the killer is he's a mountain climber part of a team to take on the Eiger in the Alps. Thanks to his old trainer Bowman (George Kennedy), Hemlock is back in shape for the ascent, only he doesn't know his target. It could be the man climbing behind him - or the man ahead of him holding the rope…

Based on the novel by Rod Whitaker a.k.a. Trevanian - The Eiger Sanction is one half lean and mean spy thriller with succinct plotting and terrific structure - the other half plays almost as a swinging spoof of the genre as our quite cold-blooded assassin finds himself in some particularly goofy situations. With the less impressive follow-up, The Loo Sanction Trevanian was basically hitting readers over the head that his novels were intentional spoofs of Ian Flemming's James Bond novels. With that balloon deflated a bit, it's easy to see where and how The Eiger Sanction is actually an intentional comedy, but what was a vague clumsy aspect on the page does not translate well to film. Clint Eastwood took an earnest stab at this adaptation and you can feel the material at war with itself.

This isn't to say that Eastwood was the wrong choice as star or director or both. In many ways he's actually perfect for both roles here, it's just the material doesn't translate well. What worked in the novel just doesn't work in a movie - it's too much genre whiplash. By the time this film was made, Roger Moore had already done Live and Let Die and The Man with the Golden Gun - and this film feels like an answer to those new James Bond adventures only without the obvious touches. The film's first and last acts are pitch-perfect spy/thriller material. The second act is a jaunty goofball training sequence that lasts entirely too long, has little bearing on the plot, and only works to reestablish our hero is a virile man as he literally chases after his scantily clad trainer with the implied promise of sex. The film's clunky juxtaposition is personified with Plan 9 From Outer Space refugee Gregory Walcott who vacillates from being an ominous legitimate threat to a buffoon in a cheap polyester suit. 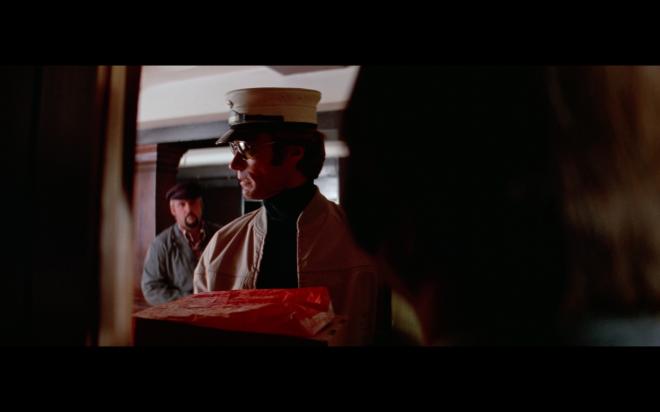 While The Eiger Sanction may not be as successful as it could be, it's still damn good entertainment. As I said, the first act and the last hour of the film is terrific stuff and Eastwood brings it to life with deft care in front and behind the camera. In front - he's the perfect unassuming gentlemen spy with a lethal edge. Behind, Eastwood's touch as an efficient director manages to pull off some intense action sequences including the damned impressive climb up the Eiger - which Eastwood did a number of stunts for himself. And it wasn't an easy shoot; a British climber working as a guide for the film died on the second day of filming when a rockfall hit him with a bolder. Under those conditions, we're lucky there's a movie to watch at all. And watching Eastwood's Hemlock move about the group trying to suss out his target is richly suspenseful material.

The Eiger Sanction must be a movie all dad's love. Both my dad and my father-in-law love this movie. As I mentioned I was working on a review for this new Blu-ray release they both had this glazed-over look of excitement in their eyes as they both asked if we could watch it. To that end, I've now watched this movie roughly four times inside of a couple of weeks and while it still feels disjointed, I'm glad that repetitive viewings didn't diminish the replay value - especially the final act. I particularly love the John Williams score, it may not be his most iconic or memorable fan-favorite, but that jangly creepy tune offers some subtle tension to this exciting adventure. I think if there'd been less comedy and more climbing-related action, The Eiger Sanction would be a more highly-praised entry in Eastwood's canon.

The Eiger Sanction climbs the steep slope of 1080p Blu-ray once again thanks to Kino Lorber Studio Classics in a new single-disc set. The film is pressed on a Region A locked BD-50 disc housed in a standard sturdy case with identical o-card slipcover with alternate reversible insert artwork. The disc loads to a static image main menu with traditional navigation options.

When Universal punched out their Eastwood films, The Eiger Sanction was among that bunch that was more or less dropped onto fans without anything resembling a fresh restoration. Riddled with unsightly edge enhancement and a clumpy grain structure, it was a disappointing release for a movie with such beautiful scenic photography. Arriving with a fresh new 2K master, this 1080p transfer is a clear and obvious improvement over all previous home video releases. For starters - no edge enhancement. This transfer offers a beautifully detailed image with a natural grain structure providing an exceptional film-like presentation. Colors also feel more bold and natural with bright primaries. The climbers' blue, green, yellow, and red coats pop nicely against the white/gray mountain. There are a few dodgy spots here there, the end of a climbing scene where Eastwood and Kennedy are sitting on top of a peak enjoying some beers still looks rough but that's a cooked-in issue. There are also a few other sequences where it looks like focus issues peppered Eastwood's signature one-take nature and are simply that way forever. Some speckling still pops up from time to time but all in all, this is a highly satisfying upgrade.

Doing some disc flipping it sounds to these ears that the same DTS-HD MA 2.0 track was recycled for this release. But that's not a bad thing as the audio mix for the 2015 disc was about the best thing that release had to offer. Dialog is clean and clear throughout. John Williams' moody score fills the soundscape. Atmospherics are subtle but present to give city locations and the mountain photography a distinct auditory vibe. It still feels pretty tight, even spread through the front/center channels without much low-end kick except for a few key action moments. It gets the job done nicely no more, no less.

Unlike the last disc, this release of The Eiger Sanction actually has some bonus features to pick through! First, we have a fine audio commentary with Film Critic Nick Pinkerton that offers up some notable details about the production as well as the film's response. The new interview with Renier Schöne is an interesting little visit as he discusses his character and making the movie on location. After that we have some archival materials that are well worth picking through

The Eiger Sanction may not be Eastwood's best film in front or behind the camera, but the action-star director managed to pull off an entertaining thriller. Some parts are a bit rough, the middle act slog is a notable issue, but the last act is terrific and the perfect payoff for genre fans. Kino Lorber Studio Classics once again issue a new and improved Blu-ray release that greatly outpaces the original disc. The new transfer fixes a lot of the dated issues that flopped Universal's 2015 disc offering a much more rewarding viewing experience. Capped off with some worthwhile bonus features, this is another Eastwood fan-favorite that gets a much-deserved and improved re-release. Recommended.