Lake Michigan Monster is an unhinged nautical fairy tale that uses plenty of visual tinkering to achieve a unique style that looks like Guy Maddin directing Spongebob Squarepants. The story follows the arrogant Captain Seafield as he assembles specialists for his “Team of the Century” to hunt down the sea monster who killed his father on the shores of Lake Michigan. The technical ingenuity and frenzied creativity transform this amusing feature into a cult oddity destined to become a great midnight movie. Arrow Video provides an outstanding A/V package for this release complete with a boatload of special features. Highly Recommended. 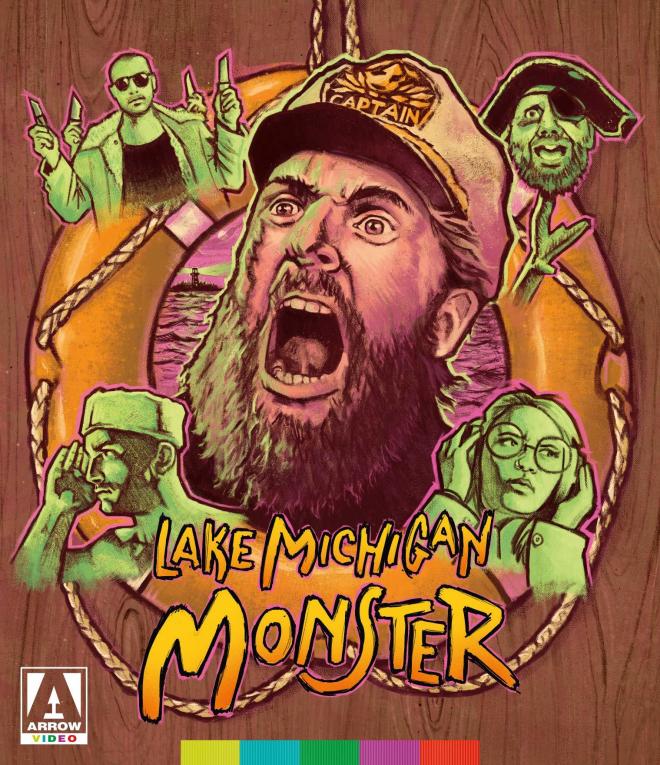 Operation Annihilation: Captain Seafield (Ryland Tews) assembles a team of specialists for his “Team of the Century'' to hunt down the Lake Michigan sea monster who killed his father. The team includes weapons expert Sean Shaughnessy (Erick West), sonar specialist Nedge Pepsi (Beaulah Peters), and Navy recruit Dick Flynn (Daniel Long). Once the anxious team reaches the sandy beaches of Lake Michigan it becomes clear that their leader isn’t telling the whole story. Captain Seafield and his team wage war against the monster in a series of missions with hilarious names like “Operation Nauty Lady”, “Operation Master Baiters”, and “Operation EGGscuse me, time to die!” When one of the team suffers at the hands of the monster Seafield must come clean and stick to at least one of his tall tales.

Combining a fever dream pace with the wit and camp of DANGER 5 this adventure film culls inspiration from 50/60s sci-fi horror seasoned with a dash of Troma and MST3K. Frankly, this film is outta control (and I love it). The Georges Méliès inspired visual effects are the anchor for the film’s humor which provides a satisfying relief to practical effect fans. Director Ryland Tews hurls everything but the kitchen sink at the film. Combining animation, miniature work, CGI, grain/dirt/damage effects, and location after location Lake Michigan Monster puts every penny of its budget to good use in its lean 78-minute runtime.

Outside of the visual appeal of the film Lake Michigan Monster has a threadbare story propelled by the comedic momentum which nosedives into musical numbers or nonsequiturs constantly. In one scene Seafield pleads with the team to attempt another mission but their exchange turns into a
"Who’s on First?" bit over the correct use of “Pear” vs “Pair”. Not all of the jokes land but thanks to the performances and pacing it doesn’t matter that much. Thankfully we get a proper sea shanty titled “Dear Old Captain Seafield” which is the most satisfying musical number of the feature.

Writer/Director Ryland Tews is a tour de force. His performance as the arrogant, silly, and downright obnoxious Captain Seafield is mesmerizing. Whether summoning an underwater ghost army or snacking on some fish sticks the sheer commitment to the performance is a sight to behold. Supporting cast performances from Daniel Long, Beaulah Peters, and Erick West as the team are all funny and memorable. Their ability to keep up with Tews’ insane setups and snappy banter makes this more than a one-man show.

Lake Michigan Monster is an unhinged nautical fairy tale that I consider a true achievement in low budget filmmaking. You never see any technical limitations inhibiting the oddly grandiose storytelling techniques which showcase the imagination and inventiveness of the feature. Cult-hungry cinephiles looking for the next hidden gem should look no further than this utterly weird and bizarre film.

Vital Disc Stats: The Blu-ray
Lake Michigan Monster arrives on Blu-ray thanks to Arrow Video. The BD-50 disc is housed in a typical transparent keepcase with reversible artwork and insert booklet. After loading the disc you’re treated to the Main Menu screen with scenes playing behind typical navigation options. Listen for the sea shanty “Dear Old Captain Seafield” and you’ll know you’ve made it. 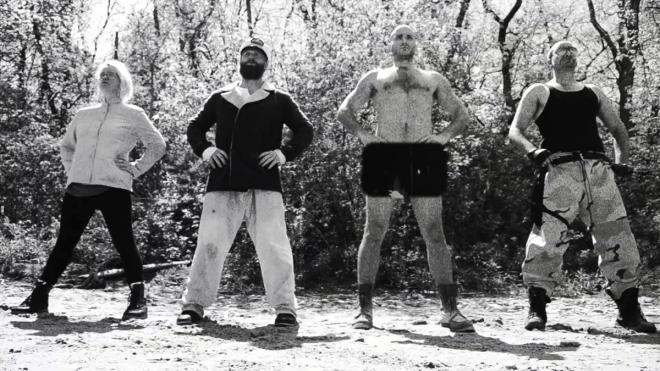 Lake MIchigan Monster arrives on Blu-ray in an AVC encoded 1080p transfer in 1.78:1. Though shot digitally the image quality of the black and white film contains layers of effects meant to give the film the appearance of a damaged film print. The effort adds an intense patina to the presentation resulting in a truly unique experience.

Contrast levels are stable but black levels hold on for dear life. Due to so much artistic tinkering with the image some scenes are so dark even the actor’s faces are obscured with shadows. Fine detail is apparent on facial features, costuming, and set design when specific scenes allow. Judging the presentation here is difficult due to all the stylized layers but there is so much activity within the image that whatever slights are noticeable doesn’t matter for this no-budget feature. 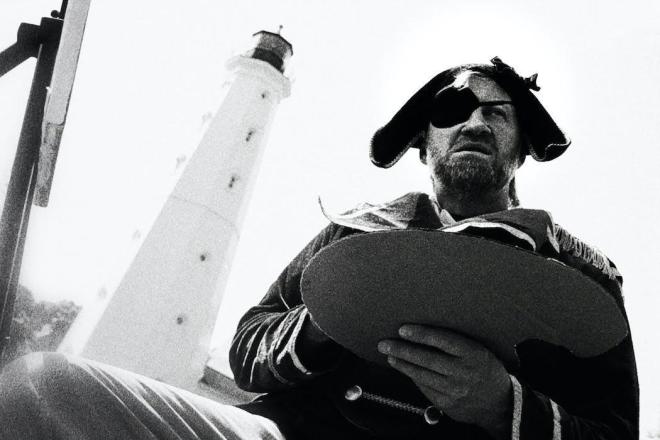 The DTS 5.1 audio track handles whatever Lake Michigan Monster can throw at us. An optional 2.0 track is included as well. Dialogue heavy with plenty of effects and musical interludes, the audio track bursts at the seams to handle the mayhem. Surround channels handle the proceedings confidently placing you squarely in the Team of the Century. LFE wakes up a few times to handle some intense moments of montage and sea battling but never overstays its welcome. 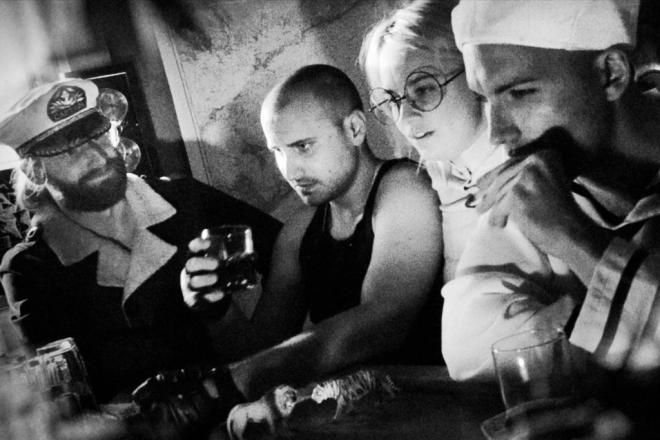 Arrow has loaded this release with plenty of bonus material to keep interested audiences glued to their screens. I recommend going through all three audio commentaries before hitting up the interviews and the VFX breakdown featurette. 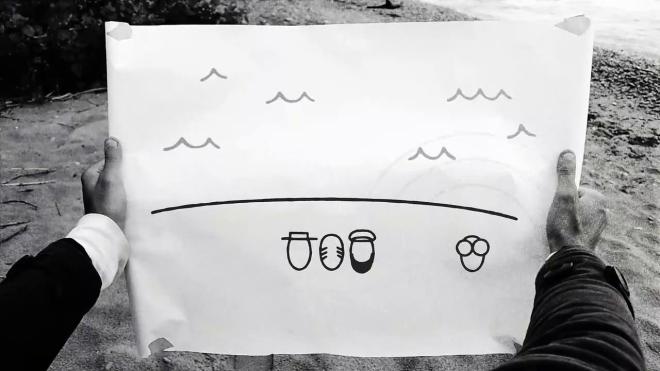 Lake Michigan Monster is a bizarre nautical fairy tale that utilizes an interesting visual aesthetic to lure audiences into the depths of its weird characters and monster mythology. Naturally, I had an absolute blast watching the film and can’t wait to see more from Ryland and company. The Blu-ray looks fantastic given all the digital tinkering involved. Arrow Video has provided a solid A/V presentation here with a boatload of special features sure to please fans of the film. Support indie film and fill that gap in your cult collection. Highly Recommended.