Amazon Women on the Moon

In 1987 comedy anthology Amazon Women on the Moon skewered the late-night TV era with slapstick sketches and weird commercials starring “lots of actors”. John Landis and Joe Dante are among the directors contributing to this spiritual sequel to Kentucky Fried Movie which maintains a devoted cult following. Kino Lorber’s Blu-ray offers an excellent A/V presentation and plenty of bonus features for fans of this cult oddity. Recommended for fans. 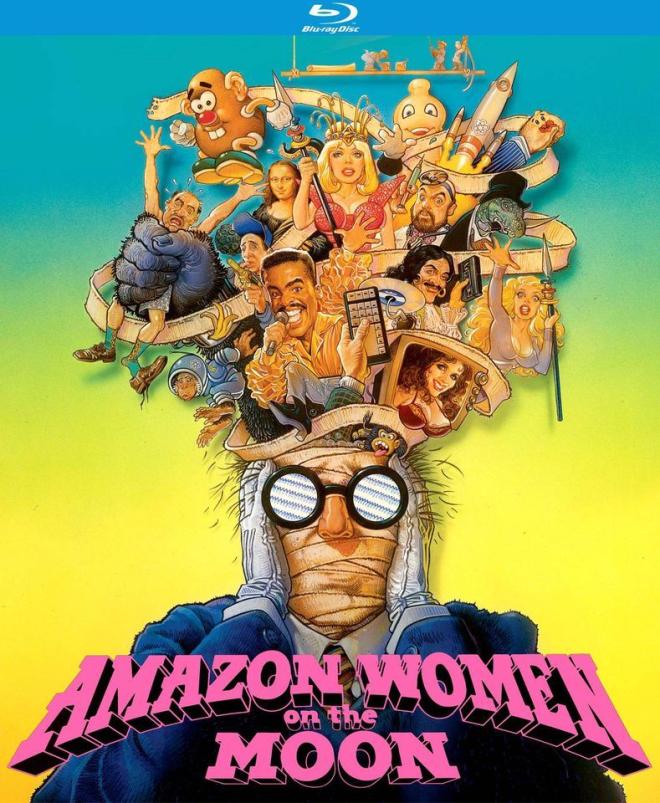 "Did I take this job for a quick buck?"

WIDB-TV Channel 8 is showing a 1950’s B-movie titled Amazon Women on the Moon. The station is experiencing technical difficulties forcing the viewer to channel surf. The shows, commercials, and short films they (we) watch are all filled with insane imagery, slapstick humor, and plenty of recognizable faces. The fake B-movie rings true as a low budget sci-fi flick complete with nonsense sci-fi dialogue such as “Electro-scan neutralized, sir.”, a monkey astronaut, and plenty of eye candy inhabiting the moon. While the central conceit of Amazon Women on the Moon is that we cut back and forth to the fake movie it’s certainly good enough to warrant a standalone feature. Hell, anything with a monkey astronaut is worth my attention.

Amazon Women on the Moon is essentially a feature-length sketch comedy show with Landis and company assembling a Who’s Who of actors/comedians to star. Carrie Fisher, Steve Guttenburg, Arsenio Hall, Paul Bartel, Rosanna Arquette, Joe Pantoliano, and Michelle Pfeiffer just to name a few. The sketches and segments offer varying degrees of humor value but thankfully everyone is completely committed to the premise no matter how unbelievably silly. (I’m looking at you Arsenio.) The comedy anthology film had peaked in the early 80s thanks to underground hits like Mr. Mike’s Mondo Video, The Groove Tube, and Tunnel Vision. When AWOTM landed sketch comedy had found a cozy home on TV and with enough programming the genre died out. Honorable Mention goes out to The Ten and Movie 43 for attempting a renaissance.

Sketches include Mono Condo with a then-unknown Arsenio Hall battling his apartment, Hospital with Michelle Pfeiffer, and real-life husband Peter Horton which offers the quotable line, “That’s not a baby. That’s a Mr. Potato Head.” Blacks Without Soul with musician BB King showcasing David Allen Grier as Don “No Soul” Simmons. Two I.D.’s with Steve Guttenburg and Rosanna Arquette is the 80’s version of Googling your date before you go out. Bullshit or Not? with Henry Silva is an anchor to the film’s success. This Unsolved Mysteries-style show posits that Jack the Ripper very well could have been the Loch Ness Monster. Roast Your Loved One is an extended segment featuring some classic comedians roasting a dead guy at his funeral. It's pure fun with an excellent premise. Unfortunately, the execution outweighs the concept which slows the film down quite a bit. Old comedy nerds will love it. Between all these are random spoofs of commercials and small sketches that are at times funnier and more memorable than the bigger productions within the film. Silly Pate, 1-800 Get Hair, First Lady of the Evening, Titan Man, and Invisible Man with the great Ed Begley Jr. just to name a few.

Tacked onto the end of the film mid-credits is the amazing segment titled Reckless Youth. John Landis is quoted as saying this sketch from Joe Dante was so good it had to be placed at the end of the film because it made everything else look like shit. Starring Carrie Fisher and Paul Bartel this send-up of a 1930’s exploitation film is clearly the best part of the movie. Mirroring the great Reefer Madness it shows a young woman drawn to the thrills of big city life and what happens when she needs to visit a doctor.

My favorite segment from the film is Video Pirates which is quite literally what you think. The swashbuckling adventure tale offers this AMAZING exchange between pirates who just boarded a ship full of home videos: “Ah, by gum, Captain! All the latest home videos. In Beta and VHS!” Help yourself, mates. A chestful of video discs!” Between this and Video Date which stars Russ Meyer as a video store clerk, Amazon Women on the Moon hits that nostalgic sweet spot when VHS tapes and late-night infomercials were all part of a balanced diet. For an old video store nerd, this hits me right in the feels. While most of the film shows its age with dated references there is still enough solid slapstick and satire to warrant checking it out through the credits.

Amazon Women on the Moon arrives on Region A Blu-ray thanks to Kino Lorber. The disc is housed in a standard keepcase. Once loaded the Kino Lorber appears before landing on the static Main Menu screen with typical navigation options featuring a still photo of Queen Lara’s guards and a raucous orchestral theme. 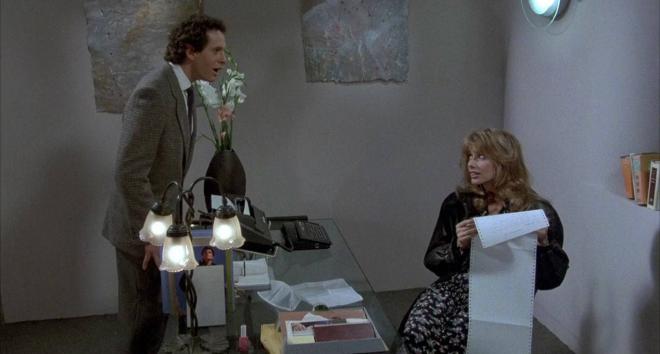 With your fast roadsters and your rumble seats, Amazon Women on the Moon arrives in 1080p with an AVC encoded MPEG-4 transfer in 1.85:1 and 1.37:1 aspect ratios. Image quality here looks amazing with bright colors and tons of fine detail. Honestly, this film shouldn’t look this good. From the individual beer bubbles on Arsenio Hall’s face to the carpet toupee on Joey Pantoliano’s head there is plenty of detailed information in the frame. Primaries can pop nicely especially the sequences with Sybil Danning and her army of guards sporting a veritable rainbow spectrum of dresses.

Skin tones appear even and contrast levels look stable save for a few nighttime outdoor scenes such as “Bullshit or Not”. The “Pethouse” segment utilizes a soft lens which contributes to the added grain and noise in the image but it isn’t enough to distract you from the subject at hand. Hell, even the blue puffy suits on the moon astronauts show depth and texture beyond comprehension. 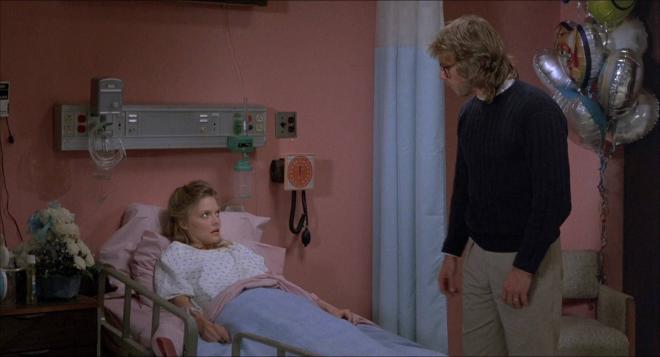 Experience the sounds of Don “No Soul” Simmons with the single DTS-HD MA 2.0 audio track. This standard mix handles the hilarious proceedings confidently. Couched in effects and dialogue the track never strains to surmount the witty slapstick effects or the zingers from Steve Allen. Dialogue is presented without hiss or pops (except when intentional). I kept the volume level at a mid-range as some sequences are recorded at a lower volume making it tough to discern the dialogue. 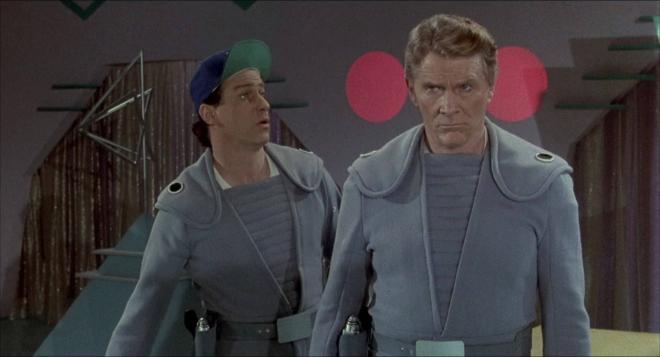 Kino has loaded this release with plenty of bonus features including a new making-of featurette, deleted scenes, and a commentary track. It’s all wonderfully silly stuff here so you can’t go wrong no matter what you choose. 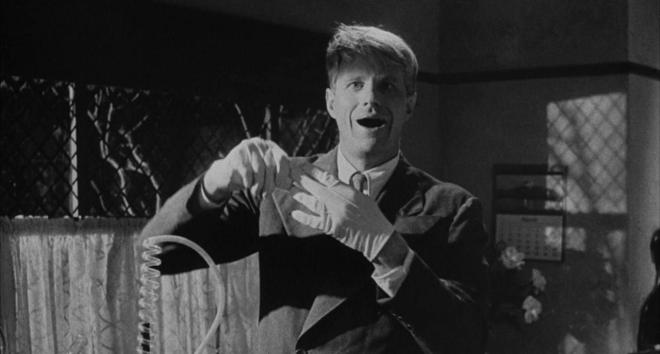 Amazon Women on the Moon is a hilarious comedy anthology film that satirizes the era of late-night TV. It’s very much a John Landis vehicle with Joe Dante at the wheel. Some sketches work well while others are stuck in their own time. Comedy nerds from the 70s and 80s will be in heaven seeing the likes of Arsenio Hall, Steve Guttenberg, and Carrie Fisher hamming it up with some outlandish material. Kino Lorber’s Blu-ray provides an outstanding A/V package coupled with bonus content sure to please fans (and New York intellectuals). Recommended for fans.