The Owners land into the home invasion genre were four young criminals set to rob an elderly couple's estate in the English countryside where the tables are turned when the homeowners don't go down so easily in a fight. It's a darkly comedic and wonderfully gory film. The film comes with a 1080p HD transfer, a DTS-HD MA 5.1 audio mix, and one sole bonus feature. Recommended. 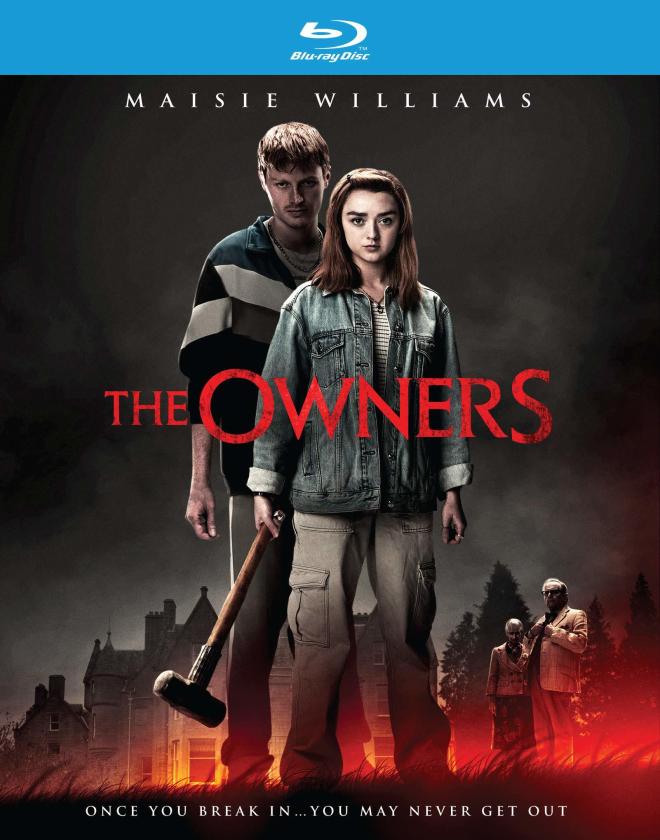 Home invasion stories will always be relevant because it's a crime that hits close to home for many people of varying degrees. There's never a shortage of these types of movies whether it be in the horror genre with The Last House On The Left or a few suspenseful thrillers that include Pacific Heights and Panic Room. First-time feature-film director Julius Berg tackles this home invasion genre with The Owners that take more than one of its cues from the recent horror film Don't Breathe. With a great cast including Maisie Williams (Game Of Thrones), this low-budget horror flick doesn't have an original bone in its body, story-wise, but Berg's darkly funny tone, silliness, and penchant for a heaping ton of gore that would make Sam Raimi blush are completely refreshing and highly entertaining.

The Owners follows a trio of young thugs in the UK that set out to a beautiful Victorian estate in the English countryside. Gaz (Jake Curran) and Nathan (Ian Kenny) are the two in charge here with Terry (Andrew Ellis) reluctantly along for the ride. Terry's mother is a housekeeper for this giant countryside estate where Dr. Richard Huggins (Sylvester McCoy, the 7th Doctor in Doctor Who), and his ill wife Ellen (Rita Tushingham from Doctor Zhivago) reside, and has mentioned this elderly couple has a big safe fully money locked away inside their house. That's enough reason for Gaz and Nathan to rob the couple blind to enhance their poor financial situation. Nathan's girlfriend Mary (Maisie Williams) doesn't condone this behavior, but her car is being used, and is forced to go.

The safe proves a bigger issue than anticipated where the three young criminals resort to just breaking things in the house and fighting with each other. There isn't really anything redeemable about any of them with the exception of Mary. The older couple arrives home earlier than expected and catch these young robbers in the act. Unfortunately for these four young kids, Richard and Ellen have diabolical secrets of their own and can more than handle themselves in a fight that leads to a literal blood bath of epic proportions. Limbs are severed, gallons of blood are spewed, and corpses turn up left and right with Mary caught in the middle of everything, where the "good" Doctor and his wife might be something entirely different than what they seem to be on the surface.

The film is quick and bloody-as-hell, but not without its dark humor to go with it. The film knows exactly what it is and never strays from its path to be something more serious, which is where this film succeeds the most, in addition to its gore and solid performances by the actors. These characters are vile, malicious, and evil without really a sense of compassion, but it's with this element where the fun begins as no matter how brutal their pain is when the sharp objects come for them - it feels satisfying and comical. It's a fine line Berg walks and he does it perfectly here.

Again, The Owners share a ton of similarities with the film Don't Breathe, including some far-fetched storylines that only seem to be implemented for a forced twist and more carnage, but the atmosphere is still top-notch with the final act shot completely different in its visual aspect to create another layer of tension, which is well-deserved. This is a solid first film from a first-time filmmaker that has a unique style and can blend in different genres very well into a cohesive and entertaining horror movie.

The Owners arrive on Blu-ray from RLJ Entertainment with one disc packed inside a hard, blue plastic case with a cardboard sleeve that features artwork that doesn't really coincide with the film itself. It does feature Maisie Williams though. There is no digital code offered. 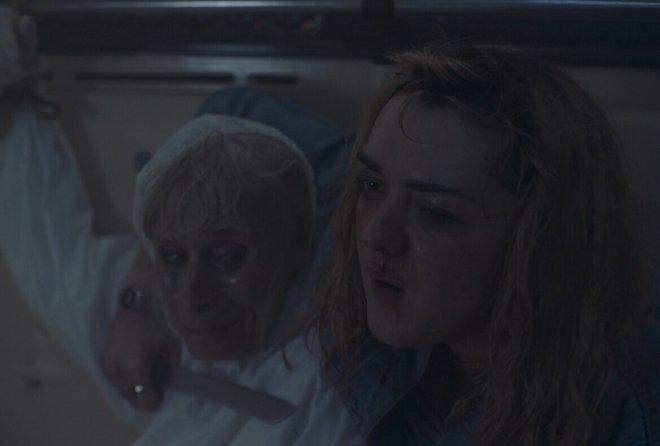 The Owners has a 1080p HD transfer from RLJ Entertainment in a 2.39:1 aspect ratio that looks quite good, given the visual tone of the film. Most of the movie is shot in very low lit elements and at nighttime. Fortunately, the video presentation here packs itself with some deep and inky black levels that allow for some excellent shadow detail with no crush or murky bleeding in these darker scenes.

The colors in the interiors of the estate look great with some gold, yellow, and brown furniture and wall motifs surrounding the rooms. Outside, green shrubs, trees, and bushes contrast nicely with the darker skies and background with varying shades of green. Some of the outfits worn by the hoodlums come with the brightest primary colors in the film that all look good. Of course, the blood is electric red and flows freely throughout the film.

The detail is rather sharp and vivid too, even in the darker sequences that reveal great closeups that showcase makeup effects, wounds, gore, facial hairs, and more. Wider shots become a tiny bit softer though. Skin tones are natural and there are no major issues with banding or aliasing here. The last scene or two of the film has an aspect ratio change from 2.39:1 to 1.37:1, meaning there will be vertical black bars on the right and left side of the screen. This is a style choice by the director in order to procure a very claustrophobic climax. This does not hinder any of the colors or detail.

This release comes with a lossless DTS-HD MA 5.1 audio mix that is more of a front-heavy track than a full-on 5.1 experience. Most scenes take place in very small rooms with a few people either talking softly or yelling at the top of their lungs which require no use for the surrounds, but they do kick into high gear with big music crescendos, heavier action, and horror sequences of violence, all of which have some good directionality.

The above-mentioned aspect ratio change also delivers an audio dynamic that immerses the audio track into a whirlwind of chaos, confusing the soundscape as to where the characters are. It's a subtle, yet satisfying effect. Sound effects of all the gooey gore are robust and loud as are the sounds of the vehicle's engines turning on and off. Dialogue is clearly presented and is free of any audio problems.

There's only one bonus feature included in this release which runs 7 minutes long and is a standard EPK featurette.

The Owners is a fun, entertaining, and insanely gory home invasion film with a solid cast. Its downfall is that it doesn't really do anything different than any other home invasion movie that's come before it so there are no real twists or turns, but overall, the movie works on many levels. There is a great video presentation and a passable audio track along with one sole EPK bonus feature. Recommended.