Blu-ray Releases Details
4-Film Collection: Film Noir (Gun Crazy / Murder, My Sweet / Out of the Past / The Set-up) 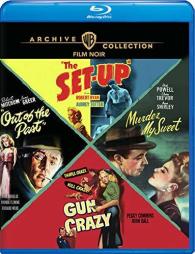 Four of the definitive masterworks of the genre, plus the feature-length documentary Film Noir: Bringing Darkness to Light (2006) from director and film historian Gary Leva. Includes commentary on all four films featuring directors Robert Wise and Martin Scorsese on The Set-Up and more! MURDER, MY SWEET: Full of wit, bravado and style! The blueprint that all others followed. As RAYMOND CHANDLER s sleuth Philip Marlowe, DICK POWELL sets out to find a missing moll named Velma. OUT OF THE PAST: A troubled P.I. (ROBERT MITCHUM), a drop-dead beauty (JANE GREER) and a moneyed mobster (KIRK DOUGLAS) are caught up in a twisted triangle in one of the greatest film noirs of all time. THE SET-UP: A world-weary fighter who feels he is just one punch away from bigger paydays is told to take a dive. Noir icons ROBERT RYAN and AUDREY TOTTER take a 10-count to the crooked world of boxing. GUN CRAZY: A searing forerunner to Bonnie and Clyde: PEGGY CUMMINS and JOHN DALL are fatalistic lovers who go on a crime spree to fund their murderous lifestyle.