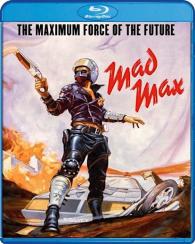 In a not-too-distant dystopian future, when man's most precious resource -- oil -- has been depleted and the world plunged into war, famine and financial chaos, the last vestiges of the law in Australia attempt to restrain a vicious biker gang. Max (Mel Gibson), an officer with the Main Force Patrol, launches a personal vendetta against the gang when his wife (Joanne Samuel) and son are hunted down and murdered, leaving him with nothing but the instincts for survival and retribution.