High-Def Digest was given the chance to take a look at the horror-western The Pale Door, courtesy of RLJE Films and Shudder. The Video, Audio, and Bonus Features sections have not been analyzed since they're not pertinent at the moment. However, when a Blu-ray is made available, we will update the review accordingly.

The western-horror flick The Pale Door yearns to be understood as some heartfelt tragedy at its core, a drama about family and the undying bond between brothers with an anguished past. The story is set against a supernatural tale involving a coven of witches and a mysterious ghost town that suddenly manifests itself in the pitch-darkness of the night. As promising as the premise may appear, the real tragedy is the lack of scares, subtlety and skilled camerawork for expressing this theme effectively and with impact. On the whole, the low-budget feature is easy enough to digest with plenty of grotesquely-interesting visuals to satiate ravenous horror-hounds. However, it's an equally forgettable piece where an intriguing concept and potential are somehow better than its execution.

Director Aaron B. Koontz, who also co-wrote the screenplay with Cameron Burns and Keith Lansdale, seemed a decently capable filmmaker in Camera Obscura and started to show some improvement in the final segment of last year's horror anthology Scare Package, which he also worked on with Burns. Admittedly, there's nothing particularly memorable about those movies either, and like the former, Koontz squanders several opportunities with bewildering shots and angles that neither move the story forward nor accurately convey the level of emotion implied by the performances. There are a few fascinating and gory visuals to be sure, such as the look of the burned witches and one scene in the abandoned church with Pat Healy's dapper Wylie. But they feel too much like imitations of Robert Rodriguez's From Dusk till Dawn, Nicolas Roeg's The Witches and Paul W. S. Anderson's Event Horizon. 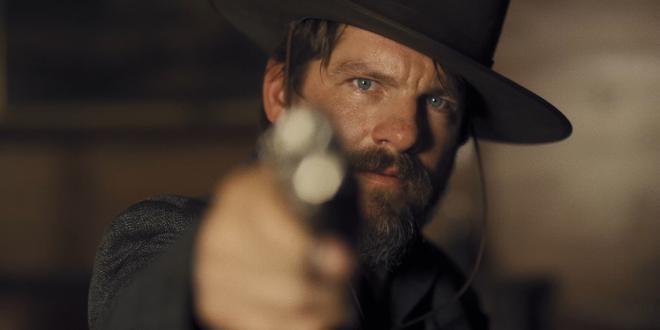 There is an evident desire to be both stylish and frightfully gory, but it shouldn't be so blatantly apparent that it detracts from the story or not be in the service of the plot. The whole movie revolves around brothers Jake (Devin Druid of 13 Reasons Why fame) and Duncan (Zachary Knighton), the latter of which is the leader of a gang of outlaws. Knighton's older brother is explicitly protective of Druid's timid greenhorn, who enlists into the gang for a train robbery with the hopes of using the spoils to rebuy the family farm. From there, Koontz clumsily drives this motive and their familial bond near the point of annoyance. If it's not their unimaginative way of addressing each other, then it is the ham-fisted way we are reminded of a childhood bandana while Jake's hat fails to carry any significant weight until it is suddenly and conveniently revealed to hold some importance.

The movie also stars Stan Shaw as Lester, a close friend of the family or possibly a farmhand promoted to caretaker, or at least, he seems as protective of Jake as Duncan. In truth, his part in all this is never really made clear, but apparently, his role is simply to serve as a plot device at the appropriate time. Meanwhile, Melora Walters makes an appearance as the coven's High Priestess and provides the story some much-needed gravitas, a small air of mystery and a tinge of forbidding. Her near folk-horror backstory is a blend of interesting although predictably conventional yet completely unnecessary to the larger whole. In the end, it's all for naught as The Pale Door fails at building towards anything worthwhile, let alone ever generate the sort of nightmarish atmosphere implied by the visuals.

RLJE Films and Shudder makes The Pale Door available for Video On Demand (VOD) and digital streaming services on 21 August. It is available to rent in HD through FandangoNOW.

If not for the ham-fisted and largely forced melodrama that distracts instead of moving the plot forward, The Pale Door could have been a fun, low-budget horror flick about a gang of outlaws clashing with a coven of witches. Mostly devoid of scares and the sort of nightmarish atmosphere implied by the visuals, the movie offers little to fully engage audiences and can be somewhat of a chore, plodding along to a rather unrewarding conclusion.