The Brides of Dracula

What do you do when you can't get one of your lead stars to return for the sequel? You turn to the character's extended family - which is exactly what Hammer did with The Brides of Dracula. In this 1960 horror feature, we find Peter Cushing thrown back into the fray as Van Helsing - but instead of fighting Christopher Lee, he's up against a horde of Dracula's spawn led by David Peel. Scream Factory brings The Brides of Dracula back to Blu-ray with a new Collector's Edition release offering a fresh new scan and a host of terrific bonus features. If you're a fan of the Hammer brand of horror - this is a terrific edition. Recommended.

The young and beautiful Marianne (Yvonne Monlaur) is traveling through Transylvania on her way to take up a teaching post when she is suddenly waylaid in a small town. The seemingly benevolent Baroness Meinster (Martita Hunt) is all too willing to house the stranded girl. Invited her back to the Baroness' castle, Marianne will come face to face with the seductive force of evil - the vampire Baron Meinster (David Peel). Chained to his room - the Baron convinces Marianne to free him whereupon he is allowed to inflict a reign of terror over the villages. Luckily Doctor Van Helsing (Peter Cushing) knows exactly how to stop this evil before it's too late.

1958's The Horror of Dracula was a massive success establishing Christopher Lee as the new face for Count Dracula and Peter Cushing his ongoing nemesis, Van Helsing. But with any success there are risks. Not wanting to be typecast as a movie monster, Lee passed on the opportunity to return as Dracula in a sequel leaving the producers at Hammer to scramble for an alternative. If you can't have the main character, why not his closest relative… that he's not really related to but you know - a vampire? Really the closest aspect that makes this anything of a sequel at all to The Horror of Dracula is the name "Dracula" in the title and Peter Cushing's Van Helsing. But that's perfectly okay, it turns out this is a pretty damn good vampire flick!

Peter Cushing was a Hammer mainstay through a variety of monster shows for the production house and is in terrific form here. While he may not jump into the action for quite a while, as soon as he shows up he gets to work going after the bloodsuckers. As a performer who liked to do his own stunts, he brings an action hero persona to this tale of bloody horror. As his evil counterpart, I have to give due credit to David Peel as Baron Meinster. This turned out to be Peel's last major acting role before leaving the industry and he's pretty great in the part. In a lot of ways, he's left to ape a lot of Christopher Lee's vampiric traits with the hissing and bloodshot eyes without putting his own spin on it, but he manages it with welcome menace. The scene where he confronts his mother is a chilling moment of intense paternally-focused rage.

What I particularly liked about this outing is the theme of parental responsibility. What is a parent to do if their child has turned to evil? Martita Hunt almost steals the show as a crazed mother who knows full well what her son has become but is either unable or unwilling to do anything about it. Instead of taking care of the evil herself or allow someone to end her son's life - she prolongs it by scooping up innocent young women and essentially feeding them to her son. She may not actually kill these women, but she's complicit all the same and in her own way just as much a villain as David Peel. 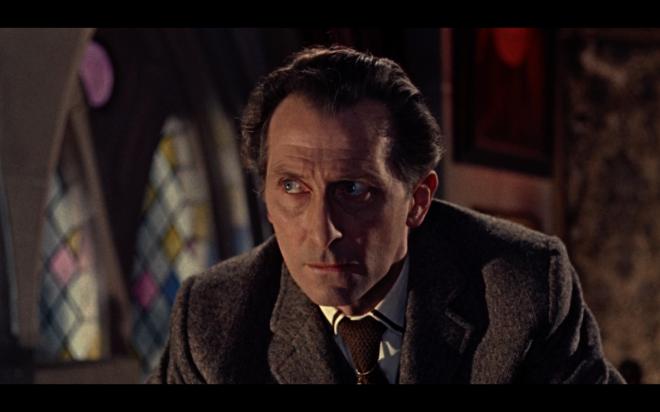 As with most Hammer shows, this is a pretty lavish production. The production design work is exquisite and the costumes are first-rate. Gore may not be as prevalent throughout most of the film, but there are some terrific sequences. Van Helsing "curing" himself of the vampire bite with a red-hot iron to his own neck and holy water is a hell of a scene with some great burn effects. Later when that holy water is splashed in the Baron's face, the open gaping wound is particularly gnarly. Future Hammer films would be able to push the content boundaries further, but this is a great example of their brand of stylish horror.

In an ideal situation, Christopher Lee would have returned from the grave far earlier in the Hammer run of Dracula and Vampire spinoffs. Such as it is, Brides of Dracula is a pretty solid film. At 86-minutes, the movie moves along at a great clip explaining just enough to allow the concept to fly without getting bogged down. While it may seem convenient for Van Helsing to be randomly traveling to the same area because of an invitation by a previously unseen priest - but then even without an invite - what else is Van Helsing going to do? He's in the vampire killing business and business is bloody booming in Transylvania! Brides of Dracula isn't the best starting point to introduce someone to Hammer's brand of horror, but it's a great example of what the studio brought to the genre and one well worth checking out. I've seen this several times since I was a kid and it's not often the first one I pull off the shelf when I want a Hammer feature, but every time I do I'm always entertained every minute of the show and it's one well worth revisiting.

After it's time as a member of Universal's 8-Film Hammer Horror Blu-ray set, Scream Factory is giving The Brides of Dracula a solo single-disc Collector's Edition release. Pressed on a Region A BD-50 disc, the disc is housed in a standard sturdy Blu-ray case with identical slipcover art as well as reversible insert art depicting the original poster artwork. The disc loads to a static image main menu with traditional navigation options. The audio commentaries are found in the Audio submenu.

Sporting a new 2K scan and restoration of the interpositive, Scream Factory's release of The Brides of Dracula is the best it's looked on disc. I didn't buy Universal's 8-Film Hammer set after checking it out from my local library left me cold to each film's overall presentation. But, as with so many of Scream's recent Hammer rereleases, this disc offers a notable improvement. Right out of the gate film grain offers a much more natural presence while offering a nicely film-like appearance. As follows, I felt details were greatly improved allowing for all of the terrific makeup effects, costuming, and impressive production details to come through.

Next on the list of improvements - Colors. The Universal set just looked pushed too red/yellow for my liking and here we get to enjoy the full range of colors indicative of a Hammer production with bright bold blues, yellows, and especially some nice thick reds with blood effects getting to take center stage. Black levels are also great allowing for some welcome image depth while avoiding crush. The interpositive elements are in terrific shape. There is still some very occasional speckling, but that's the worst of it and with Cushing's coat I did spot the occasional bit of banding but it was so fleeting you could blink and miss it.

The film is also presented in both the original 1.85:1 intended theatrical ratio and through the Bonus Features menu the 1.66:1 aspect ratio. Aside from slight black bars along the side, a little more information around the top and bottom there aren't dramatic differences between the "bonus" 1.66:1 and the default 1.85:1. They were both sourced from the same scan offering the same details, color timing, and so forth. I personally prefer the 1.85:1 - I like that it tightens the image a bit and makes the film feel a little more claustrophobic, but if you're a fan of the alternative you'll appreciate the appearance here. 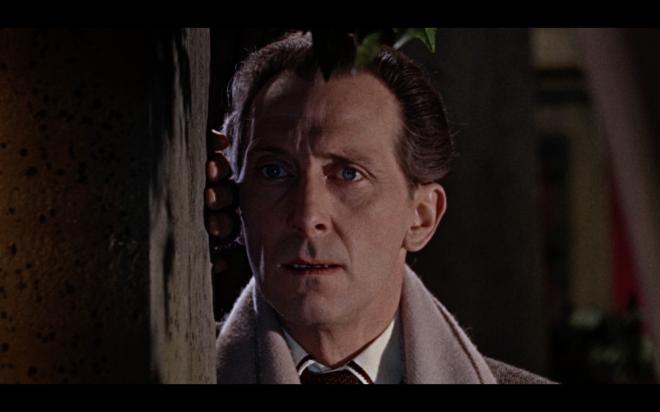 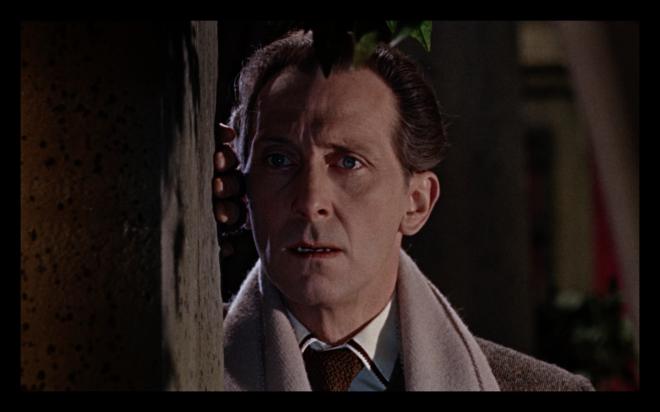 The Brides of Dracula arrives with a DTS-HD MA 2.0 mono audio mix that I can only surmise has been ported over from the 2016 universal set - which is totally fine. This is a clean mix with some great sound effects work, clear dialog, and that terrific Malcolm Williamson score amps up the soundscape. I may not have needed to, but I threw on my Neural:X function and the mix opens up beautifully. The sound of the carriage wheels rumbling through the rough terrain was nice and intense to set the ominous tone. When Baron Meinster's first bride is awakening from her grave it's a great blend of creepy atmospheric sound effects, and Freda Jackson's cackling is chilling stuff.

The big win for this Collector's Edition of The Brides of Dracula is the bounty of new and archival bonus features. We get an excellent new audio commentary with author Steve Haberman and film historian Constantine Nasr. Both offer a lot of great information about the film, how the production came together, and in general, it's a lively track without any lengthy pitstops. As previously mentioned the 1.66:1 1080p framing of the film is available here but I hardly call that a true bonus feature, but it's listed here all the same. After that, there's a bunch of great featurettes as well as the classic making of The Brides of Dracula documentary.

When a key star of a hit film refuses to go through with a sequel and the studio proceeds anyway - that usually turns out to be a big mistake. Amazingly enough, The Brides of Dracula works. Sure, not the best of Hammer or their catalog of vampire films, but it's a solid entry made all the better with a terrific performance from Peter Cushing as the man of action Van Helsing. The film has all of the hallmarks of a solid Hammer film with lavish production values, creepy horror setpieces, and some pretty intense splashes of gore. A fun show for the Halloween season.

Scream Factory continues to offer impressive replacements to Universal's 8-Film set from 2016. A new 2K scan of the interpositive allows for a richly detailed film-like presentation in both aspect ratios while the audio is crisp and on point, and there are hours of excellent bonus features to pick through. If you're a Hammer fan looking to add to the collection - consider this one Recommended.