The Opposite Sex transfers the classic 1939 comedy The Women to the theatrical realm, adds a few unnecessary songs and a host of superfluous men, and ties everything up with a Metrocolor bow. All that tinkering, though, dulls the story's bite and produces a tedious musical that can't begin to compare to the beloved original. Warner Archive's brand new remaster yields a sparkling transfer that's lovely to look at and solid audio enlivens the action, but even a top-notch A/V presentation can't mask the movie's shortcomings. Sadly, The Opposite Sex lacks allure, and for that reason, it's strictly for fans only.

Turning established plays into musicals has long been a common practice. Sometimes the transformation works and sometimes it doesn't. Unfortunately, The Opposite Sex, a misguided musical update of the 1939 film adaptation of Clare Boothe Luce's classic feline comedy The Women, falls into the latter category. Though MGM usually possesses the Midas touch when it comes to Golden Age musicals, this haphazard retooling rarely comes alive nor does it capitalize on the talents of its accomplished all-star cast.

Somewhere within The Women lies the potential for a clever musical. The witty story of a gaggle of backstabbing bosom buddies who gossip, connive, and make mincemeat of each other's marriages all in the name of sisterhood slings a barrage of poisoned arrows at the filthy rich, male-female relations, and the sanctity of wedded bliss. An adept composer and lyricist undoubtedly could do wonders with such material and the array of memorable, over-the-top characters and situations Luce creates, yet sadly The Opposite Sex adopts a slapdash approach and makes some fatal missteps that sabotage director David Miller's film at every turn.

More of a remake with songs than a cohesive musical, The Opposite Sex transfers the Park Avenue tale to Broadway and plops in random numbers without any rhyme, reason, or narrative impetus. The mediocre, forgettable tunes by Nicholas Brodszky and Sammy Cahn in no way relate to the plot, don't delineate character, and continually stall the movie's momentum, while the updated screenplay by Fay and Michael Kanin eliminates the original's inspired gimmick of not including any men in the cast. The 1939 film features not a single male - even all the extras are women - but the remake gives the story's husbands and lovers a good deal of screen time, much to its detriment. 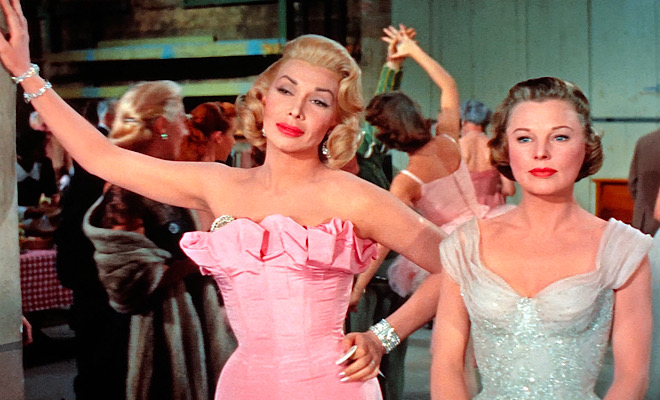 Now single and jaded, Kay emerges from Steven's shadow and resumes her theatrical career. She becomes an independent woman, but despite lingering feelings of anger of resentment, still harbors feelings for Steven, who foolishly married the materialistic Crystal on the rebound. Hard knocks have taught Kay claws are required to hook a man, and when she finally grows her talons she becomes a force to be reckoned with and pursues her ex-husband with uncommon gusto.

The main problem with The Opposite Sex is that it's not The Women. Once you've seen George Cukor's classic 1939 film, it's impossible not to continually think of it - and pine for it - while watching this uninspired remake. Though it's capably produced, directed, and performed, The Opposite Sex pales dreadfully in comparison and its big-name cast does, too. Let's face it, Allyson is no Norma Shearer, Collins is no Joan Crawford, Dolores Gray is no Rosalind Russell, and Ann Miller is no Paulette Goddard. All the actresses put their best feet forward, but they've got huge high heels to fill. The finest work comes from Ann Sheridan as Allyson's intellectual confidante, Agnes Moorehead as a l'amour-obsessed countess, and Joan Blondell as a perennially pregnant pal. (Interestingly, in an off-screen twist that fits this film like a satin glove, actor Dick Powell ended his eight-year marriage with Blondell in 1944 so he could marry Allyson, who remained his wife until his death seven years after The Opposite Sex was released.) 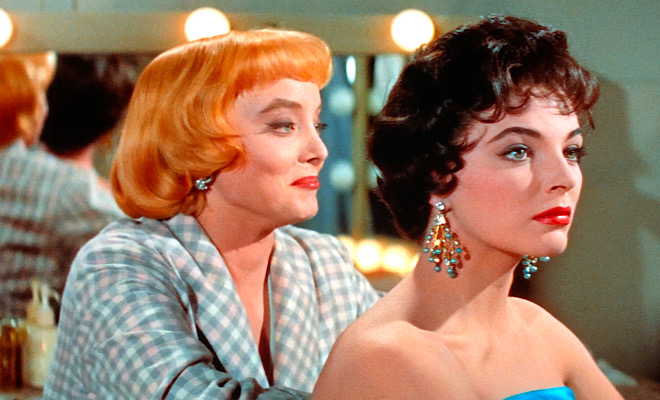 And tell me this... What musical worth its salt casts tap dancer extraordinaire Miller and powerhouse vocalist Gray and doesn't let either dance or sing? That's just lunacy! (Okay, Gray does perform the title song over the opening credits, but that's the only time we hear her potent pipes.) Even the top-billed Allyson, a veteran star whose distinctive singing voice perks up many memorable musicals, doesn't get the respect she deserves. Though she sings two upbeat tunes in the film, MGM had the gall to dub her romantic ballad (the change in vocal tone is startlingly and distractingly obvious); the first and only time in her career Allyson wasn't allowed to sing for herself. Maybe that's why The Opposite Sex was the last picture Allyson ever made for the studio.

Twenty-five years before Dynasty, the 23-year-old Collins previews Alexis Carrington with the kind of bitchy portrayal that would become her trademark. She's a vision in her bubble bath and maximizes her considerable kittenish sex appeal, but brings little dimension to her gold-digging role. A pre-Morticia Addams Carolyn Jones makes a bigger impression in a smaller part, and in only his fourth feature film, the not-yet-silver-haired Nielsen appears surprisingly subdued. Strapping Jeff Richards gets the showiest male role as well as his own musical number, but all the guys, including Dick Shawn (in his movie debut), Jim Backus, and Sam Levene, take a decided back seat to the gals.

Even if you take The Women out of the equation and grade The Opposite Sex on its own merits, it's still a second-rate musical. The numbers aren't up to MGM's usual high standards and too much gloss dulls any remaining sting in the script. Metrocolor, CinemaScope, lavish costumes, sumptuous sets, and plenty of pretty ladies dazzle the eyes, but in the end, The Opposite Sex merely proves that old adage that beauty is only skin deep. 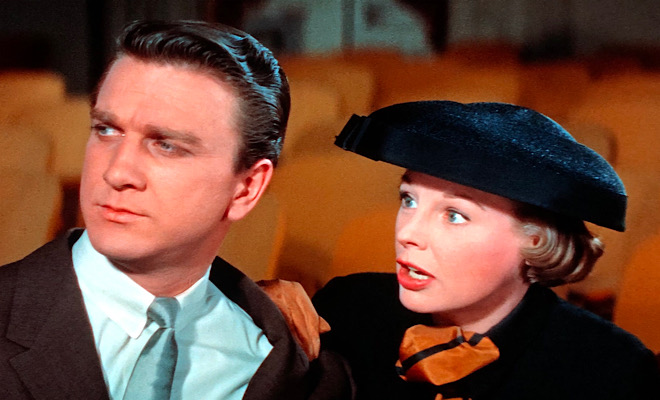 The Opposite Sex arrives on Blu-ray packaged in a standard case. Video codec is 1080p/AVC MPEG-4 and audio is DTS-HD Master Audio 2.0 stereo. Once the disc is inserted into the player, the static menu without music immediately pops up; no previews or promos precede it.

A brand new master yields a vibrant 1080p/AVC MPEG-4 transfer that showcases all the glamor and gaudiness oozing from the screen. Jewels sparkle, satin gowns exude palpable sheen, and details in the lavish sets abound. Light grain preserves the feel of celluloid, while excellent contrast and clarity and an array of bold colors punch up the picture. Fittingly, luscious reds and vivid pinks predominate, but all the hues exhibit lovely saturation without appearing garish. Ann Miller's jet-black hair and the mens' tuxedos flaunt an inky texture, and bright whites remain stable and resist blooming throughout. 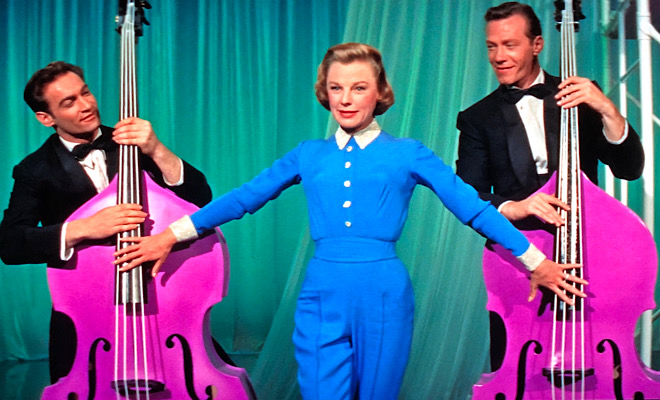 The enhanced clarity exposes just how overly made up all the actresses are (what seems like an excess of foundation - possibly to hide an excess of years - make some of the stars look a tad plastic and ghostly), but the glossy close-ups - especially those of Collins - are often striking. Any signs of age-related wear have been erased and no digital anomalies disrupt the viewing experience.

The DTS-HD Master Audio 2.0 stereo track supplies clear, robust, well-modulated sound. Though distinct separation across the front channels is faint throughout, the audio exudes a sweeping, expansive feel that allows it to effortlessly fill the room. A slight boost in volume and fidelity lend the musical numbers additional oomph, while a wide dynamic scale handles all the highs and lows of the vocals, instrumentals, and especially the screaming blare of Harry James' trumpet without a hint of distortion. Sonic accents like the crashing of crockery during the catfight scene and Allyson's forceful slap of Collins' cheek are appropriately crisp, and all the dialogue and song lyrics are well prioritized and easy to comprehend. No age-related hiss, pops, or crackle intrude either. Good sound is essential for a musical, and this track nicely delivers.

The only extra on the disc is the film's three-minute original theatrical trailer, featuring an introduction and narration by actor Jeff Richards.

MGM made dozens of sumptuous, entertaining, and enduring musicals during its heyday, but unfortunately The Opposite Sex isn't one of them. This wholly unnecessary remake of 1939's The Women sprinkles in some mediocre songs, adds men to the story, and gussies everything up with Metrocolor, but despite all the gloss, director David Miller's lavish film can't eclipse the iconic original. With a few exceptions, the all-star cast comes up short, and the head-scratching creative choices sabotage this tedious musical at every turn. The Blu-ray, though, sure looks pretty, thanks to a brand new remaster, and it sounds great, too. As Diane English would discover in 2008, The Women is best left alone...a fact The Opposite Sex learned all too well a half century earlier. For Fans Only.