Paul Newman, Tim Robbins and Jennifer Jason Leigh star in filmmakers Joel and Ethan Coen's darkly comic look at big business. When the founder of Hudsucker Industries leaps to his death from the 44th floor boardroom window the board of directors panics. But there is a plan: install a complete imbecile as president of the company and devalue the stock so the board can acquire a controlling interest for themselves. But where can they find such a guileless patsy? Enter Norville Barnes. Fresh off the bus from Muncie, Indiana, as a graduate of the 1958 class of the Muncie College of Business Administration, Norville is ready to start at the bottom and work his way up to the top of the corporate world ... he just never imagined it would happen so quickly.

In the decade following their 1984 debut feature 'Blood Simple', filmmakers Joel and Ethan Coen steadily rose to prominence as American auteurs to watch. This period in their careers culminated with a 1991 Palme d'Or win at the Cannes Film Festival for their bizarre Hollywood satire 'Barton Fink' – an event which drew the attention of a most unlikely collaborator. Super-producer Joel Silver ('Lethal Weapon', 'Die Hard' and practically every other notable action movie of the 1980s) decided that it was time to exploit the talents of these boy geniuses, and that he wanted to be in the Coen business, as Hollywood parlance would have it. At the same time, the Coens were eager for their first taste of mainstream success.

Silver signed up the brothers to make a new project of their own choosing, gifted them with full artistic control to do whatever they pleased, and (through his Silver Pictures banner) secured the backing of Warner Bros. with a budget of $25 million. Although hardly blockbuster money, that was nearly twice as much as the Coens had ever worked with previously, and would be enough to resurrect an old, very ambitious script they'd written years earlier with their pal Sam Raimi. A loving homage to screwball comedies of the 1930s and '40s,'The Hudsucker Proxy' told the tale of a naïve rube who improbably skyrocketed to the heights of big business success in New York City, only to fall from grace just as spectacularly.

Tim Robbins plays the schmo, Norville Barnes. Fresh off the bus from Muncie, Indiana and lacking the experience required for any other position, Norville takes a job in the mail room of Hudsucker Industries. He may be starting at the bottom, but he has Big Ideas. As fate would have it, his arrival coincides with an unexpected opportunity. In a desperate bid to retain control of their company, the board of directors, led by the duplicitous Sidney Mussburger (Paul Newman), have concocted a scheme to hire a total imbecile to take over as President. This puppet, or proxy, that Sidney can manipulate will cause shareholder panic and depreciate the company stock until it's cheap enough that the board members can buy it up themselves. After a convoluted chain of events brings them together, Sidney becomes convinced that Norville is exactly the dolt he needs. But is it possible that Norville could be wise to their plans? 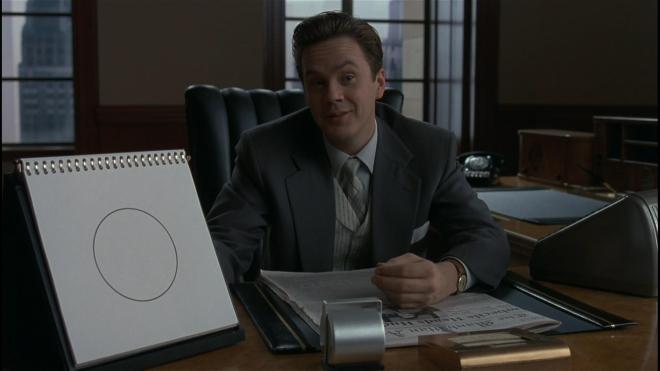 As consummate movie nerds, the Coens pay tribute to the films of their heroes, including Billy Wilder, Preston Sturges and Frank Capra. Eclectic artists, they also filter their vision through a host of other random influences, from Fritz Lang to Buster Keaton and even the surreal fantasy of Terry Gilliam. More than just a standard period piece, 'The Hudsucker Proxy' concocts a dreamworld 1958 setting that could only exist in the movies, complete with an elaborate miniature cityscape the Coens' camera glides through and, eventually, Fourth Wall-breaking magical intervention.

Tim Robbins has never been more appealing than as the wide-eyed dope Norville, whose face registers every triumph and failure even faster than the rat-a-tat-tat dialogue can deliver it. Bringing by far the most star power to the piece, Newman is deliciously amoral as the villain. Yet the movie's real secret weapon is Jennifer Jason Leigh as big city career gal Amy Archer, a fast-talking reporter dame who believes that Norville is a fraud and is determined to expose him. Channeling a mixture of Rosalind Russell and Katharine Hepburn, the actress machine-guns out her dialogue in a way no human being has ever spoken to another in real life, but everyone wishes they could. She's amazing.

Filled with hilariously witty banter delivered at a breathless clip and endless amounts of visual invention (an extended montage in the middle of the film is six minutes of pure joy), 'The Hudsucker Proxy' is the Coens at both their breeziest and funniest but also their most arch and idiosyncratic. Unfortunately, critics at the time couldn't wrap their heads around what the brothers were up to. After winning at Cannes, surely they should have focused their efforts on making a serious and weighty drama gunning for Oscar, not such a frivolous confection? Audiences were either turned off by the strange title or had no familiarity with the classic movies this one referenced, and simply didn't get the joke. The Coens' most ambitious and expensive project to that time, the film was a box office flop that made almost no money at all. Nevertheless, if you can tune into the filmmakers' wavelength, the picture is a delight from start to finish.

Everyone involved took a big gamble on 'The Hudsucker Proxy' and had very high expectations, none of which were fulfilled. Although the movie eventually earned some cult popularity, it has largely fallen into obscurity. Not to worry, the Coens would bounce back two years later with one of their most acclaimed and successful films, 'Fargo'. They did pretty well for themselves in the long run.

'The Hudsucker Proxy' was released on Blu-ray through the Warner Archive Collection back in February of 2013. Yes, I realize that this review isn't exactly timely, but I was in the mood the watch the movie and noticed that no one on staff here had covered the disc yet.

The Blu-ray is a professionally pressed and authored copy (not a burned BD-R), but like most Warner Archive releases is a minimalist affair packaged in a basic keepcase with just the movie's traditional poster art on it. The disc has a very rudimentary menu that doesn't even offer a scenes selections guide to the chapters.

The video contents of the Warner Archive Blu-ray have been authored onto a single-layer disc. If I had to guess, I'd assume that the video master probably dates back to the DVD release from 1999 and did not receive a new film scan in 2013. Whatever the case, the 1080p/AVC MPEG-4 transfer is, if perhaps not perfect, pretty solid on the whole.

As is the studio's policy for all productions originally photographed at a 1.85:1 aspect ratio, the movie is presented on disc in an open-matte 1.78:1 transfer that exposes a tiny amount of extra picture at the top and bottom of the frame. The difference is negligible and not worth quibbling about.

The image is rarely razor sharp, but has a satisfying amount of detail and texture. Film grain is visible but neither excessively gritty nor smeared away with Digital Noise Reduction. The contrast range is a little flat and colors are frequently drab. However, if anything, that actually makes the explosion of color with the unveiling of Norville's invention stand out even more. I'm not saying that makes the rest of the scenes accurate, but the lasting impression rates as "Pretty Good." 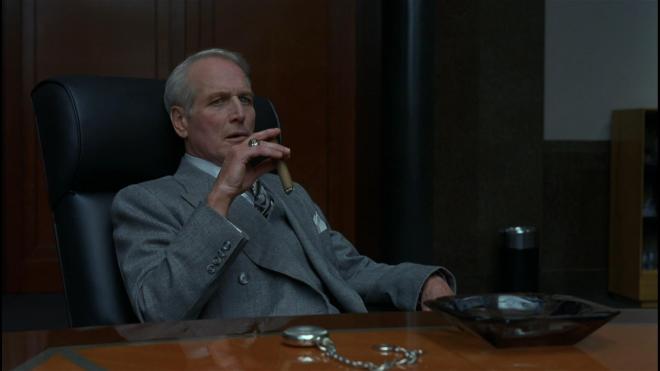 I would have liked to see more attention paid to the soundtrack. The movie's sound design is creative enough that it really could have benefited from a 5.1 remix – not because I need to hear more gimmicky channel separation, but some careful finessing might have improved the depth and fidelity of the track.

Originally mixed in 4-track Dolby Stereo, this is a matrixed surround encoding. Through most of the movie, surround usage is understandably mild. However, especially when processed through the modern Dolby Surround Upmixer decoder, some scenes are surprisingly effective in their amount of envelopment. Any scene set inside the clockwork room is a guaranteed highlight. 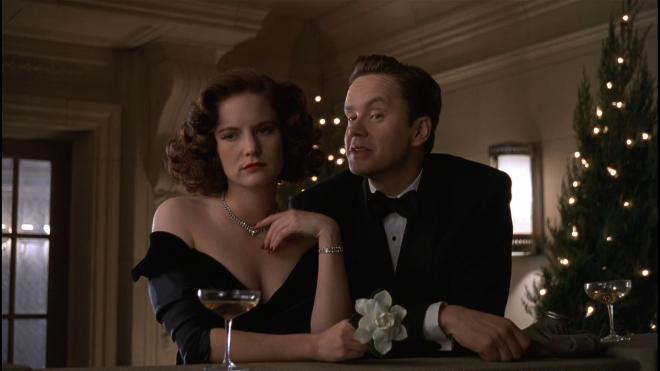 Warner's DVD edition released back in 1999 had no bonus features whatsoever. Simply by virtue of the fact that the Blu-ray has one solitary item, it must be considered an HD exclusive.

The studio didn't exactly rifle through its archives looking for added value content related to this movie. Nonetheless, the Blu-ray can claim to have something the DVD did not. It's not much, unfortunately. 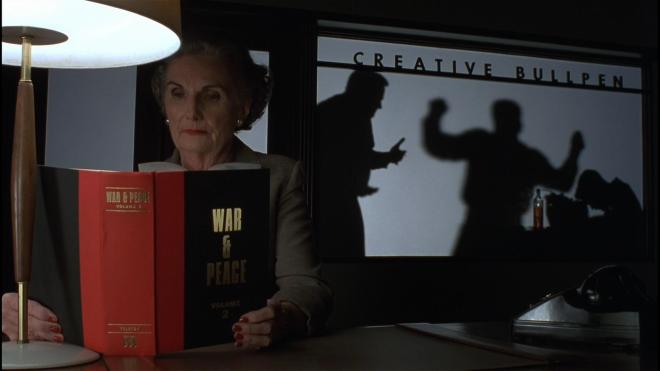 Perpetually one of the most underrated of the Coen brothers' movies, 'The Hudsucker Proxy' is a witty and hilarious reinvention of the classic screwball comedy. As much as I may think the movie deserves a sparkling new 4k scan with all the bells-and-whistles expended on a full-blown Special Edition, the no-frills Blu-ray from the Warner Archive looks pretty good and is a satisfying way to revisit the film.

Sale Price 17.99
Buy Now
3rd Party 13.97
In Stock.
See what people are saying about this story or others
See Comments in Forum
Previous Next
Pre-Orders
Tomorrow's latest releases