When a heavy piece of machinery is possessed by alien intelligence - only Clint Walker can save the day in Killdozer! It wouldn't be a 70s made-for-television horror movie if it didn't have a completely bonkers premise - and this one delivers a serial killer bulldozer clipping off workers on a remote island one-by-one! Kino Lorber Studio Classics delivers this cult film favorite to Blu-ray with an excellent A/V presentation and some worthwhile bonus features. If you're a fan of crazy horror for the Halloween season, it doesn't get much better than Killdozer - Recommended.

An oil company needs an airstrip on a remote island in Africa - so they hire six of the best construction workers to grade the land and build it in record time. Unfortunately, thousands of years earlier a meteorite carrying an alien life form crashed on that island, and when the workers disturb it, it infects their gigantic Caterpillar D9 bulldozer. When the dozer comes alive and kills the men on its own - foreman Lloyd Kelly (Clint Walker), has to find a way to end the unstoppable machine's reign of terror before the next crew arrives on the island. 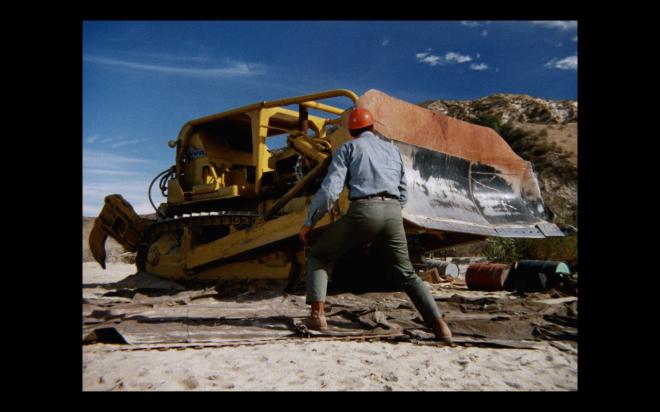 Based on a sci-fi novel from 1944, I have to give props to the crazy person who thought this would be the perfect movie-of-the-week feature and then having the gumption to actually make it. From the get, it's apparent this isn't the most lavishly budgeted of movies. Clint Walker represents the primary star power here, and he does what he does best. The rest of the cast including Carl Betz, Neville Brand, James Wainwright, James Watson Jr., and Robert Urich all hold their own as long as they can - but the bulldozer is the obvious star of the show.

All credit to director Jerry London for bringing this to life. He makes a lot of effort to pass off this silly plot with some measure of legitimacy. As with the best of B-movie science fiction and horror, it doesn't stop long enough for it to consider how silly it is, it just goes for it. The camera spends a lot of time trying to make this massive bulldozer appear as a sinister conscious creature capable of inflicting an incredible amount of harm with a measure of silent stealthy cunning. Obviously, you can only do so much with that, but some of the sequences are pretty damn creepy. Then you have poor James Watson Jr. who has the most prolonged death sequence with the mad monster. His ability to play this sequence straight is a testament to his talent as an actor - his straight-faced timing would come in handy on Airplane II: The Sequel.

To that point, for this breezy 73-minute movie, it's the cast that makes it. Most B-Movies fall apart when there's a cast member who clearly hates being there and obviously feels they're above it. Here, there isn't any of that kind of apathy. These guys dig in and slay their parts without ever tipping it. Even Clint Walker as an established film and TV icon never feels like he's slumming it. He straps in like he's in Cheyenne all over again only without a six-shooter and a horse. This bulldozer could have been a possessed train and we could have had a sequel movie to his classic television series. Writing that now I kinda want to see that movie!

I came across Killdozer largely due to Mystery Science Theater 3000 and their Clint Walker jokes. Their episode for I Accuse My Parents featured a short called "Truck Farming" where a dozer is being used and Crow shouts "Clint Walker, NO!" - after that joke I never understood, I had to find this movie. Thankfully my old favorite rental shop at the time had a well-used tape of it and I had a blast. Now, whenever I see construction equipment in movies I have to snicker at the thought of Clint Walker struggling to drive a possessed bulldozer.

If you're going to be watching any of the amazing made-for-tv movies for Halloween this year, there are probably a dozen better shows to look at - The Night Stalker and The Night Strangler or watching Karen Black be attacked by a tiny voodoo talisman in Trilogy of Terror. However, if you're looking for great entertainment value where you're going to be laughing at as much as with the movie - Killdozer delivers. It's not particularly scary, it's too silly for that, but in its own weird little way, this schlocky show works. It ain't Christine, but it's still a hell of a lot of fun.

Killdozer lands on Blu-ray thanks to Kino Lorber Studio Classics in a single-disc release. Pressed on a Region A BD-25 disc, the disc is housed in a standard sturdy case with identical slipcover artwork. The disc loads to a static image main menu with traditional navigation options.

Reportedly sourced from a new 2K master, Killdozer earns a strong Blu-ray debut with this 1.33:1 1080p transfer. From the start, the image offers an impressive amount of detail and a natural grain structure for an overall pleasing film-like presentation. Details mostly come in the form of the simple blue denim uniforms and the equipment the men use. Killdozer itself has a nice amount of paint chipping and rust detailing to give it an ominous look - but this is a very simple production so design work is minimal as I'm sure most of the budget went towards the diesel that thing was burning.

Black levels are solid with some great inky moments. There are a few sequences where blacks are a bit hazy or more grey/brown than true black, but not terrible and nothing approaching crush. Colors have some nice primary pop but again, limited location, costuming, and set budget don't call for much of that. The source elements are clean and in great shape without any notable age-related issues to speak of. For a film that was never very pretty of visually interesting to begin with, this does look pretty good!

The DTS-HD MA 2.0 track found here is pretty basic stuff for a made-for-tv movie of the week. It was a low-budget television movie so most of the sound design is dialog and construction equipment rumbles with minimal scoring or call for atmospheric effects. The engine of Killdozer does offer a nice throaty rumble in the channels while the alien-like pulsing sound pitches the high notes. It's actually an irritating sound so don't be surprised if you feel the need to lower your levels a bit - but that's not the mix's fault. Otherwise, this is a solid audio track that gets the job done.

While this isn't a huge package of bonus features, the audio commentary and the audio interview with Jerry London make it worth the while. London in his 20-minutes offers a great amount of info about his career in television and working on Killdozer. The audio commentary with Lee Gambin and Jarret Gahan is a good listen as they offer a lot of perspective and insight into the film and the state of made-for-tv films at the time. That said, a full Jerry London commentary would have been awesome.

Killdozer isn't a movie to be quickly confused with high art - let alone as an excellent example of horror/science fiction filmmaking. It's just a fun cult classic. It might have worked best as an episode of The Twilight Zone as the concept runs short of a feature runtime. As goofy as it is, the cast holds this beast together with Clint Walker bringing his old school western swagger in a final fight with a piece of heavy machinery. Kino Lorber Studio Classics does right by fans of this flick with a strong Blu-ray release. The A/V presentation is spot on for a made-for-television movie of this vintage while the bonus features give fans a little something extra to pick through when the show is over. If you love vintage schlock, it doesn't get much better than Killdozer - Recommended.