Interdimensional-galactic-travelers Rick and Morty conquer Season 4 on Blu-ray thanks to Warner Brothers. The mad irreverent foul bizarre animated comedy from Dan Harmon and Justin Roiland is just as wild and bonkers as ever, even if the routine is starting to show some cracks. There are still some great episodes and the Grandfather/Grandson duo voiced by Roiland are still damned hilarious, it just may be time to take another 2-3 year break to freshen up the madcap creations a little. Featuring strong A/V presentations for all episodes along with a collection of interesting bonus features - if you're a fan you should be happy with this release. Recommended.

I have a few friends who haven't gotten into Rick and Morty yet and they haven't because they don't get what it's about. Yeah, on the surface it's about a verbally abusive alcoholic grandfather and his grandson going on wild intergalactic space adventures, but it's a lot weirder than that. Thematically it's about something and nothing at the same time. As Rick constructs a world so he can enjoy a quiet and safe place to go number 2 in isolation, he learns he longs for friendship. Then a couple of episodes later Harmon and Roiland are taking fans on a hilarious deconstruction of the overstuffed impossible heist movie tropes essentially explaining why they hate the genre. Then you get slut dragons... it's a weird wild show. 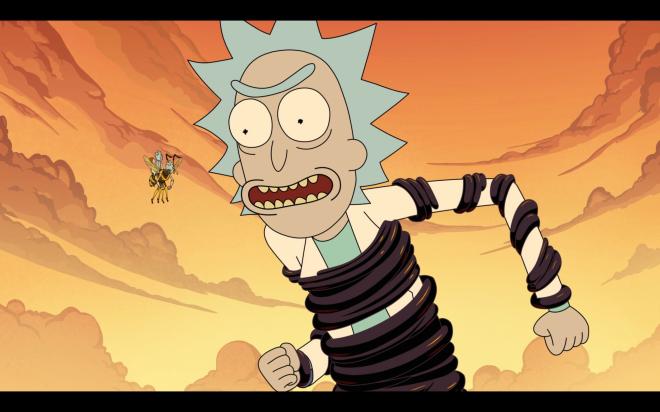 Rick and Morty knocked it out with the one-two punch of Season 1 and Season 2. The show was true to form for Adult Swim and fit right in with its bonkers plots and self-aware brand of comedy. Then to tease (and even piss off fans) the show went dormant for years. From 2015 to 2017 there was a drought of new episodes with either Harmon or Roiland cryptically saying "we're working on it" with rumors of behind the scenes creative turmoil. But Season 3 came back strong as ever - maybe not as creatively "fresh" but there was some great stuff in there.

Another year-long break with the creative duo promising to be more "regular" with the show and we have Season 4. All in all this season was pretty good, but there are some notable ups and downs within each episode. There are moments in the writing - especially any of the frequent calls to the demands of fans or "what are you doing to the series?" moments that just feel like Harmon and Roiland have become apathetic to the show. They've got a contract, they're getting paid, still churning out some funny material - but there is a sense they'd rather be working on something else now. They both certainly have other irons in the fire - Roiland has Solar Opposites on Hulu to keep him distracted.

I dug this season. Rick and Morty: Season 4 was pretty funny stuff. In keeping with the rest of the series, I like how I can throw on a season and burn through it in a couple of hours. Some episodes are better than others - but that's true for most shows. There are plenty of great gags and shoutouts to pop culture references to be enjoyed and for the most part, it keeps pace. But watching through the first three seasons recently, Season 4 felt a little tired by comparison. I hope the show isn't in much of a hurry to get back for Season 5 - another year or two off wouldn't be a bad thing at all if it means they come back stronger and funnier.

Rick and Morty: Season 4 arrives on Blu-ray in a single disc Blu-ray + Digital slip from Warner Bros. The disc is housed in an eco-friendly case with a cardboard slipcover. The disc loads to a static image main menu with traditional navigation options. Each episode can be viewed on their own or through a "Play All" function.

Season 4 of Rick and Morty holds point with previous Blu-ray releases for the series offering up a bold and colorful 1080p transfer for each episode. Clean lines in the animation with seamless CGI integration offers a pleasing viewing experience. The series has grown over the years and looks much more cinematic than its more humble beginnings. Colors for the series have always been bright and vivid and this season is no different in that regard. Free of any banding or unsightly compression artifacts the series looks great.

As with past seasons of Rick and Morty, every episode of this season sports a great Dolby TrueHD5.1 audio mix. There's always a lot going on in each episode with plenty of action, dialog, and music to produce a robust soundscape. One minute you can have a relatively quiet moment with Rick berating Morty and the next you could have a swarm of advanced time-traveling snakes hissing and firing lasers as they teleport through time and space. Throughout every episode, there is great imaging and atmosphere spread across the channels. Levels are on point without any need to adjust.

Fans may not be getting hours upon hours of bonus features for this season, but what's here is pretty solid stuff. While quick and to the point, each Inside The Episode segment offers a unique look at each particular episode while the focused segments get to take a look at what it took to achieve the characters, animation style, or just what it was like to work on the show in general.

Rick and Morty: Season 4 may not be peak form for the series, I'd argue it hit the high water mark with Season 2, but it's still pretty damn good. It still made me laugh through each episode as one random reference or irreverent gag popped up after another. Some bits are clunkier than others, but all in all, it's fun and if you're a fan of the show you should be having a blast. But if you're aiming to get into Rick and Morty - start at the beginning. This isn't a sequential show but you'll get most of the gags better if you start at Season One. Warner Bros. delivers another great Blu-ray release giving each episode a genuinely excellent A/V presentation as well as some interesting bonus features to pick through. Recommended.