You Should Have Left - Digital Review

High-Def Digest was given the chance to take a look at David Koepp's psychological horror-thriller You Should Have Left. The Video, Audio, and Bonus Features sections have not been analyzed since they're not pertinent at the moment. However, when a Blu-ray is made available, we will update the review accordingly.

Coming from David Koepp, arguably one of the better writers currently working in Hollywood today, I half expected You Should Have Left to be an enjoyable horror flick with, at least, a few creepy, spine-tingling moments. Instead, this melodramatic adaptation of Daniel Kehlmann's novella of the same name is barely a passable psychological thriller that forgot the thrills but forces the always anticipated "unexpected twist" with predictable results. The mystery at the center of its premise about the damage of keeping secrets in a marriage is decent enough to sustain audience interests through to the end. But without the scares to also keep us engaged and perpetually on edge of what's hiding behind every corner of this puzzling ultra-modern house in the chilly hills of Wales, the story ultimately becomes a frustrating chore to escape, much like the protagonist and his family.

I can already imagine someone arguing that as the filmmakers' intentions — to put viewers in the mindset of Kevin Bacon's Theo Conroy, baffled by the house's maze-like architecture while growing increasingly annoyed. Granted, the house does have a weird fascination, which immediately attracts Theo, a former investment banker with a dark, shady past that continues to haunt him. With its curious, unexplained shadows, walls that don't measure the same inside as they do outside and doors that suddenly appear and disappear, the house possesses a bizarre Lovecraftian allure, and the legend of its construction by a local shop merchant only adds to that apparent influence. Most notably towards the end, the plot set in a spooky landscape also plays with some "folk horror" themes, a small subgenre suddenly enjoying a rise in popularity largely thanks to Ben Wheatley's Kill List and Robert Eggers's The Witch. 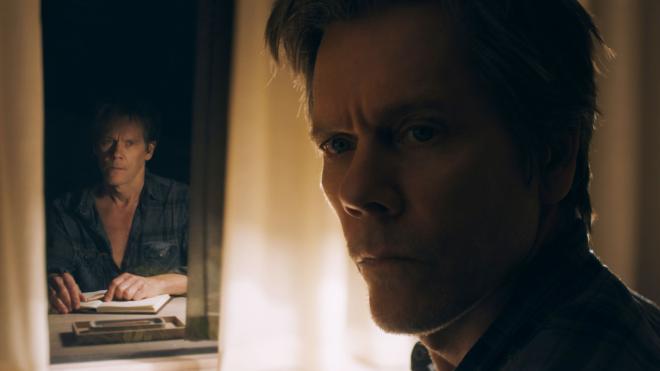 As a fiendishly devoted horror aficionado, this is always the rub about the genre as a whole: learning to appreciate well-made, creepy-stylized productions with mind-numbingly bland and stale stories more likely to put viewers to sleep than frighten them. Working with production designers Sophie Becher and Megan Elizabeth Bell, cinematographer Angus Hudson (Cashback, The Broken) beautifully photographed the gray, overcast vacation home and locations with a deeply gloomy sense of hopelessness and portentousness. However, Koepp fails to take what looks creepy and truly make it feel creepy — to generate even an ounce of foreboding. Previous directorial efforts (Secret Window, Ghost Town, Premium Rush and Stir of Echoes, which also stars Bacon) demonstrate a capable enough filmmaker, so the better mystery would be solving where all the supernatural scares are hiding in this house.

In another sad case of style over substance, Koepp's You Should Have Left strains at appearing more complicated and layered than it really is. Perhaps, the labyrinthine structure of the house is meant to complement Theo's tortured, tangled psychosis, but honestly, that is just a throwaway guess since the movie doesn't ever suggest this to be the case. Instead, we spend a good portion of the time running up and down stairs and looking behind doors wondering for where the story is going, only to end up exactly as expected. All the while, a very cold and rather monotonous performance by Amanda Seyfried as Theo's actress wife only succeeds in amplifying the frustration with her own predictable secrets. There are some admirable aspects to Koepp's film, as it is a decently well-crafted chiller, but like the characters staying in the house, about halfway through, I should have left from boredom.

Originally planned for a theatrical release, Universal Pictures has made David Koepp's You Should Have Left available for Video On Demand (VOD) streaming services, like FandangoNOW.

With an interesting premise about a mysterious house in the chilly hills of Wales, David Koepp's You Should Have Left showed a great deal of promise for, at the very least, a fun spook-fest with Kevin Bacon and Amanda Seyfried in the leads. However, what should have been a creepy psychological thriller with a spine-tingling supernatural angle spirals into a dull melodrama that fails to leave much of an impact, making the title more of a suggestion than an open-house invitation.