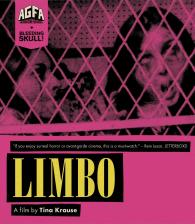 The American Genre Film Archive (AGFA) represents the world's largest theatrical catalog of exploitation cinema. Their home video line presents a diverse selection of movies, ranging from new preservations of classics from the vast library of Something Weird to the wildest in shot-on-video (SOV) titles. Vinegar Syndrome's sister company, OCN Distribution, is thrilled to be representing this diverse and unique home video line!

After starring in 100 movies over the past two decades, Tina Krause has established herself as an unstoppable warrior from the DIY fringes. LIMBO is the first -- and to this day, only -- movie written and directed by Krause. And it's truly invigorating. LIMBO presents three days in the life of a woman named Elizabeth, as she deals with identity issues, sexist mouth-breathers, supernatural manifestations . . . and a possible trip to hell. Combining video collage experiments with dreamy horror mood, this is what might happen if David Lynch and Nine Inch Nails collaborated on a shot-on-video horror movie. Previously only available via VHS, AGFA and Bleeding Skull! are honored to present a brand new transfer of LIMBO from the original S-VHS master tape.