Kelly Reichardt’s newest film First Cow is a brilliant anti-western set in 1820’s Oregon. The slow-burn drama centers on the friendship between two travelers hoping to make their fortune in the undiscovered lands thanks to a single cow. The unique visual aesthetic combined with the strong yet subtle performances makes the film a touching and memorable experience that is worth the hype. The Blu-ray from Lionsgate and A24 provides a solid A/V presentation with only a single bonus feature available. Recommended. 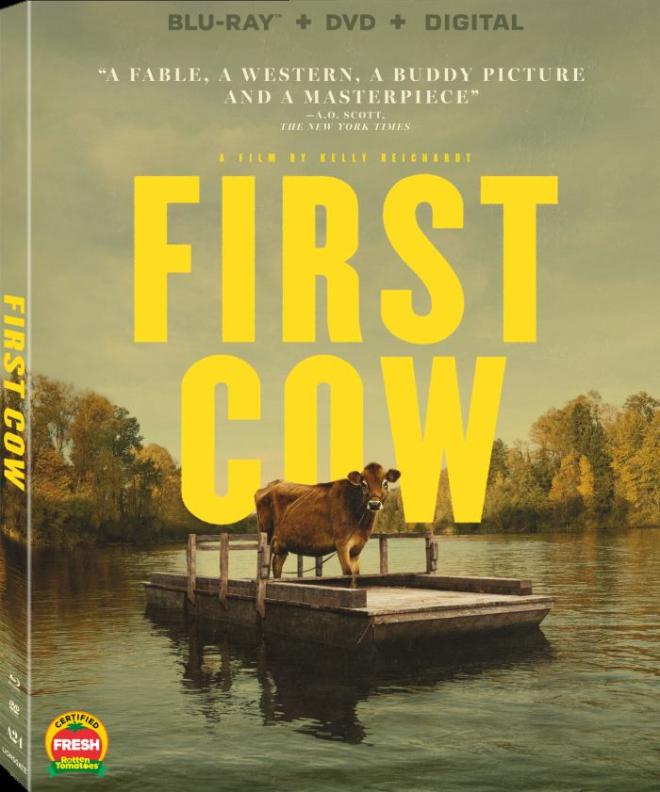 The soft-spoken and gentle Mr. Otis Figowitz aka: Cookie (John Magaro) is traveling with a band of trappers and hoping to keep their stomachs full until they reach Fort Tilikum in 1820’s Oregon. During a late-night scavenge for vittles he stumbles upon a naked Chinese man hiding in the brush named King-Lu (Orion Lee). On the run from a group of Russian hunters, Lu ran off dropping his clothes and gun along the way. Cookie takes a risk smuggling the man back to his camp under the cover of night. The next day we see him on the run again swimming downriver. In the trapper village, Cookie hears about the first cow in the territory being brought in for a local official named Chief Factor (Toby Jones). When a fight breaks out Cookie sees his old Chinese friend King Lu fully recovered from his escape.

King-Lu is an ambitious Chinese immigrant with an entrepreneurial spirit. Cookie is just moving through life hoping to secure some decent wages to live another day. Employed as a cook to a group of trappers, Cookie is a kind and gentle soul that even when tromping through the forest he will stop to help a salamander stuck on its back. This first cow (no pun intended) reminds the apprenticed baker that with milk he could make the best biscuits in the territory. Lu sees this as a golden opportunity and soon the men are sneaking through the woods to milk a cow in the dead of night. Cookie makes small talk with the bovine as he nervously gets to work. When he brings up the two other cows who didn’t survive the trip he pauses and offers a sincere note with “Sorry to hear about your husband.”

Naturally, their biscuits are heavenly and soon the “oily-cakes” are selling out to famished frontiersmen daily. Now that Cookie is applying his skills as a baker and King-Lu, ever the shrewd opportunist forms the risky plan for their fortune and a way out of Oregon. Ultimately their struggles to carve out a way of life mirror our own clashes with capitalistic roadblocks.

The film opens on a modern-day oil freighter slowly crossing the frame. The ship moves across the screen in real-time signaling the tempo of First Cow well before we cut to the Oregon frontier. This relaxed visual pace is sustained through the feature coupling the slow passage of time with the crawling momentum of life in the West. As we are introduced to Cookie and King-Lu their differences are quite apparent until they begin to form a friendship revealing the laid-back traveler within that strives for a better life. Though these characters are set 200 years ago their struggles and camaraderie are relatable even today. Outcasts on the fringes of society scraping together a meager existence in hopes of making enough money to secure a dream sounds pretty timeless, right?

First Cow is filled with solid performances from John Magaro and Orion Lee. Their naturalistic mannerisms and connection with the material elevate the emotional stakes of the film turning an otherwise bland conflict into a thrilling experience. Supporting cast performances from Ewen Bremner, John Keating, Toby Jones, and Scott Shepherd are brilliant as well. Though Toby Jones is the standout name in the cast his presence is never distracting. I can’t help but think that in different hands the buddy tale of two men stealing milk to make biscuits would be another Will Ferrell joint with John C. Riley. I’ll admit that there is humor throughout First Cow (including some killer dad jokes from Cookie) but it’s completely innocent back-and-forth material that compliments the genuinely warm humanity on display between the two men.

Rich in textures and themes about friendship, entrepreneurship, and life’s unexpected course is what makes First Cow worth a watch. Reichardt crafts a compelling story that deserves attention which isn’t hard to say considering the director’s excellent filmography.

First Cow arrives on Blu-ray thanks to Lionsgate and A24. The Blu-ray/DVD Combo Pack houses the two discs in a tandem style keepcase with a digital copy insert. The disc loads to a trailer for The Farewell before landing on the Main Menu screen with scenes from the film playing behind the typical navigation options. 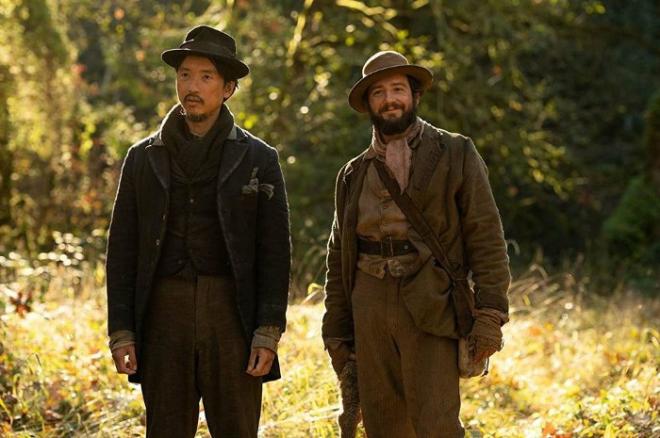 First Cow arrives on Blu-ray with a 1080p AVC encode supporting a tight 1.37:1 aspect ratio. Though filmed digitally with the Arri Alexa the added grain layer on top adds a wonderfully textured look to the film. It looks fantastic! Did I just see a faux cigarette burn? Fine detail evident in costuming and the beautiful landscapes. The intricate patterns on fern leaves are visible as Cookie brushes past them. The worn fibers on the pelts hanging off the trappers as they berate the lowly cook offer a look at the level of craftsmanship from the production. Night scenes lose some clarity and receive a bit of motion blur at times. Fine detail in shadow and darkened scenes evident with facial features and costuming showing clearly defined lines and textures. Reichardt used day-for-night during the filming making the scenes easier to read.

The tight framing is an unexpected start to the film but colors appear rich and well defined through a muted palette with deep earth tones monopolizing the artistic vision. Blues, pastel yellows, and deep greens anchor the palette providing a warm, comforting experience. An endless supply of long takes and slow pans adds depth to the painterly visual presentation that is so unbelievably engaging. The use of the tight 1.37:1 frame and the addition of a digital grain overlay makes the period piece appear as a lost 16mm feature discovered just for you. 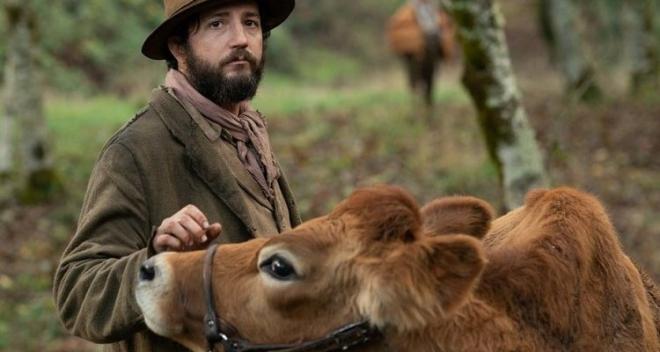 The lone audio track is a lossless DTS-HD MA 5.1 track that handles the proceedings confidently. Offering plenty of atmospherics from the surround and front channels you’ll appreciate how easily you become swept away in the audio mix. Dialogue is clear and easily audible though I would keep the volume up at a mid-level to catch all the nuances in speech and articulation.

A bit light on the bonus content here but the one included featurette is well worth a watch. 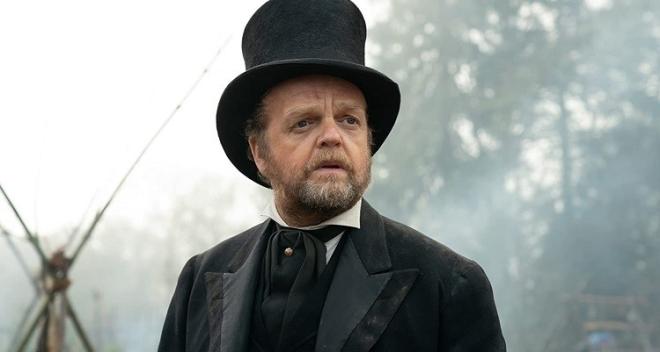 First Cow is a wonderfully humble and touching story that holds within its core the values of true friendship and challenging adversity. With a minimal acoustic score and an interesting visual appeal, First Cow transforms a captivating tale into what would otherwise be a simple story of frontier capitalism and economics. Double Feature this one with Meek’s Cutoff if you can.

The Lionsgate Blu-ray provides a solid A/V package with a confident DTS audio track and a unique yet excellent image presentation. The minimal bonus content is a bit of a bummer but otherwise, this film is Recommended.