At a time when the dynamic comedic duo was on an upswing in their career - Africa Screams starring the iconic Bud Abbott and Lou Costello is a grandslam comedy. This adventure is a gag-a-minute featuring colorful performances from boxing heavyweight Max Baer and his brother Buddy with appearances from Clyde Beatty and Frank Buck with Hillary Brooke and Shemp Howard and Joe Besser. After languishing for years in public domain hell - the amazing team at 3-D Film Archive and ClassicFlix offers a world-class A/V restoration with a host of excellent bonus features. If you're an Abbott & Costello fan - this is an essential piece of the collection - Highly Recommended

"I can't understand why you have this terrible fear of animals in you. What is it?"
"When I was a little baby I was scared of my piggy bank."
"That's nonsense."
"You wanna hear something worse?"
"What?"
"I was 15 years old before I ate my first animal cracker."

Department store clerks Buzz (Bud Abbott) and Stanley (Lou Costello) have a simple routine showcasing books to would-be customers. When Diana Emerson (Hilary Brooke) and her goons (Max and Buddy Baer) show interest in an out-of-print book with a valuable map - Stanley is the only one who read it. Since Stanley claims to be able to draw the map, Buzz smells big dollars and recruits the pair into Diana's African safari expedition to find a rare giant ape only nothing is as it seems - least of all Stanley's abilities as a cartographer! 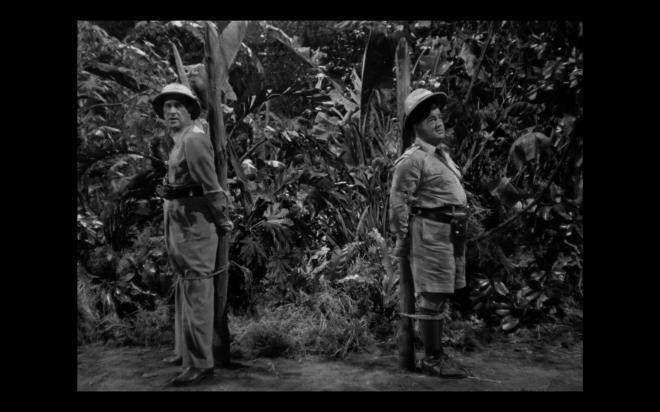 After working for Universal Pictures for most of the 1940s producing 22-films for the studio - their 24th film inside of 10 years - Africa Screams was made for independent producer Edward Nassour. Free of Universal's churn and burn machine, Bud Abbott and Lou Costello got to run some of their usual gags while they also got to break away and play with their schtick. This African jungle romp was exactly what the boys needed to refresh their game. With Meet Frankenstein marking the high-water line for their time at Universal, Africa Screams is a delight from start to finish allowing for both performers to play to their strengths while working in new material. Consummate straight man Bud Abbott is funnier here than he'd been in a long time. Sure, Lou gets to shine with most of the gags, Bud's own one-liners fly fast with a refreshed zing.

One of the things that makes this particular adventure so much fun are the numerous famous faces. Hilary Brooke manages to hold a straight face with Bud and Lou yucking it up and lean into the gag as the villain - a helpful skill that would become important when working on their television show. While big game hunters and lion tamers Clyde Beatty and Frank Buck are fun (if you're at all familiar with their careers), it's world heavyweight champion Max Baer and his equally imposing brother Buddy as the heavies who stand out. While they're not there for the comedy - their hulking goon personas give Abbot and Costello some new material to try out and the two titans never feel out of place. If that wasn't enough - Shemp Howard of Stooges fame drops by as a world-famous crack shot - who happens to wear glasses thicker than Coke bottles. Shemp's Stooges replacement Joe Besser even gets a few moments to roll.

Somehow this stew of talent works. While it's certainly an Abbott & Costello movie with the pair front and center, everyone in the movie gets time to shine making it feel more like an ensemble cast. The plot is goofy enough that it works. If a map in an out-of-print book is all these people need to find their treasure, why don't they just find another copy? Well, if they did that then we wouldn't have a movie!

Then we get the big reveal of Stanley's abilities to draw the map... and that goes about as well as you'd expect. Toss in a gorilla that falls for Stanley, a few crocodiles, some jungle natives looking to make a meal out of our heroes and you have one hell of a romp. Some moments may not stand the test of time - there's one gag with the previously mentioned natives that's pretty cringe-inducing, but the rest of the show stands up as one of the last truly great comedy outings for Abbott & Costello. Most of the films they produced after felt like retreads or just flat tired because they were also hip-deep in their television show. Here they're crisp and on point landing some peak comedic material.

When 3-D Film Archive announced their restoration Kickstarter I was excited but trepidatious that this movie actually could look good on Blu-ray. Even with the original 35mm nitrate film elements, I had some doubts. I was hopeful for a "well, it's better than the old VHS tapes" scenario. Damn it all this is one of the best restorations of a classic movie anyone could have hoped for. I knew the team would do their best work as they have for a dozen other impressive restorations, but this is a modern miracle. Ever since I was a kid I've watched Africa Screams on TV or through practically unwatchable VHS tapes and this time around I felt like I was actually seeing the movie for the first time. After the amazing Abbott & Costello Collection from last year, with this release I feel like my collection of two of the funniest men in movies is complete.

After a successful Kickstarter effort, 3-D Film Archive with Classic Flix delivers Africa Screams to Blu-ray in a single-disc set. Housed in a standard sturdy case, the film is pressed on a Region-Free BD-50 disc. The disc opens to a trailer for The Noose Hangs High before arriving at a static image main menu with traditional navigation options. This release is limited to 2,500 copies. Also included is a pair of anaglyph 3-D glasses for viewing one of the bonus features.

It took a really long time for USPS to deliver my Kickstarter reward, but the wait was worth it! Culled from the original 35mm nitrate film elements, Africa Screams enjoys an incredible 1.37:1 1080p restoration and transfer to Blu-ray. To be frank - this movie has always looked like crap on home video because it drifted into the public domain. I can't point to a single VHS or DVD that was even remotely a quality transfer let alone watchable. The team at 3-D Film Archive is well known by three-dimensional enthusiasts as one of the best crews in the industry for getting amazing results with relatively low budgets. This is a modern miracle - hands down this is their best restoration effort to date and I don't say that lightly.

The opening credits may show some slight wear and tear, but once the main feature starts - it's gorgeous looking practically brand new. Instantly details in the actors, costuming, set design - are all appreciable. That first gag where Lou Costello is trying to tame a tiny kitten like it's a lion sets the comedic tone for the movie and now you can actually fully appreciate the gag! Film grain is natural throughout creating a welcome filmic appearance. Grayscale is in perfect form allowing for shading and gradience from bright whites to deep inky blacks with appropriate shadows to give the image that desirable sense of three-dimensional depth. There are a few remaining nicks and scratches, some slight speckling here and there, but they're barely noticeable. Africa Screams has a sad home video history but this restoration is truly a glorious resurrection for one of my favorite movies in the Abbott & Costello catalog.

If a glorious video restoration wasn't good enough for you - the same treatment has been given to the DTS-HD MA 2.0 mono track. After so many terrible VHS tapes with shrill tinny audio or muddy dialog you had to crank the volume on - it's amazing to hear this movie sounding so fresh and clean without feeling over-processed. Free of any hiss, cracks, or dropouts, this is the best audio mix I've ever heard for this movie. Dialog is crystal clear and even as a mono-sourced mix, there's a wonderful natural spaciousness to the track. Music cues blend in without overpowering the mix. Sound effects have a natural whip-crack quality - especially the hilarious lion-taming scene! Thre are a few tinny canned sound effects but overall they're pretty good. It's a crackling great audio mix and again, I'm amazed at the results here. This is honestly better than I could have hoped for.

If a world-class restoration that'd put a major studio to shame wasn't enough, 3-D Film Archive and Classic Flix deliver a terrific set of bonus features - none the least of which is a restored Abbott & Costello 3-D Comic Book that can be viewed polarized on a 3-D television or in anaglyph 3-D with the included red/blue glasses. A great audio commentary, TV sketch, gag reels, bonus interviews with cast and crew including a 1948 Abbott & Costello radio episode with Bela Lugosi - this is a complete package of great extras that are a true treat for fans!

Abbott and Costello's Africa Screams is one of those rare gems where the comedy duo got to break out of the box a little and shake things up. It's a standout feature made independently of their studio contracts allowing them to try new things and go for broke with the gags. They feel fresh and revitalized in this movie where some of their previous outings were on autopilot. Getting away from Universal for a working vacation was the best thing to happen to these comedic geniuses.

3-D Film Archive with Classic Flix did the impossible giving fans not only a watchable quality copy of Africa Screams but delivered a first-class restoration effort. Truly this film has never looked or sounded better on any home video format. On top of near-pristine A/V - we get a package of carefully cultivated and entertaining bonus features to pick through - with something even 3-D enthusiasts can enjoy! If you're an Abbott & Costello fan, your collection isn't complete without Africa Screams - with a very limited number of copies available don't hesitate to pick this up! - Highly Recommended