Shirley MacLaine takes Clint Eastwood for a long ride through the Mexican fight against French colonialism in Don Diegel's Two Mules for Sister Sara. This 1970 western is Siegel at his best behind the camera with Eastwood delivering all the charm and swagger that would define his career - while Shirley MacLaine steals the show as a nun with a few secrets of her own. Kino Lorber Studio Classics brings Two Mules for Sister Sara back to Blu-ray with a new and improved video transfer, both versions of the film, and a nice collection of bonus features to match. Highly Recommended

After rescuing a nun by the name of Sister Sara (Shirley MacLaine), Hogan (Clint Eastwood) signs up for a whole heap of trouble in the Mexican desert. Already scheming to help destroy a French garrison for the Mexican resistance fighters, Hogan soon finds that having a nun traveling with him can be a blessing… and a curse depending on how you look at it. Especially a nun like Sister Sara who is a hell of a lot more than what she seems.

Having worked together well on Coogan's Bluff, Eastwood and Don Siegel would cement a lasting working relationship that would continue with The Beguiled, Dirty Harry, Two Mules for Sister Sarah, and culminate with the classic prison break thriller Escape From Alcatraz. As a mentor to Eastwood as he started to move towards producing and directing his own films, Eastwood would pay a fitting tribute to Siegel by including him in his director's graveyard in High Plains Drifter.

With Two Mules For Sister Sara, we see Eastwood bring his star-defining swagger with Siegel's penchant for suspense and action filmmaking all playing catchup to Shirley MacLaine's natural sass. There's a reason she's top-billed when the credits roll. It may be an action/adventure/western - but it's her movie. Her charisma and screen presence plays to upend Eastwood's traditional leading man role. He may make a lot of plans and dig his heels in a time or two, but she's the one who gets to call the shots when it comes time. Their stressed interplay and sexual tension punch some great comedic undertones to this little opus.

Much of the film plays like a classic road movie. Our seemingly main character picks up an unexpected passenger and is coerced into a wild and crazy adventure. If they were in a car instead of a couple of horses and a mule, they'd be zipping through Route 66 meeting all sorts of colorful characters and likely destroying a few roadside attractions in the process. It's a terrific framing device for this adventure into Mexico. As the action is relatively light for the first two-thirds of the film, it relies on the interplay between Eastwood and MacLaine to set the stage for a blistering final action sequence. By the time the revolutionaries are attacking the French garrison, we're fully invested in our characters and their relationship. And just in the nick of time, we're given one heck of a great twist to add a little extra salt to the arrow wound Eastwood earns in the process - all the while setting the stakes a little bit higher. 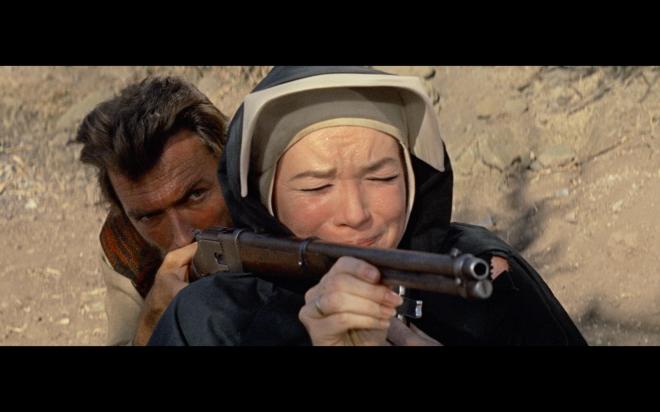 Plastered with an iconic Ennio Morricone score, Two Mules For Sister Sara is the kind of Western out to have fun with itself but doesn't take the genre for granted. It doesn't rely on old stereotypes or genre conventions to skate by and be a breezy cast-off piece of fluff. Instead, the film likes to take a languid leisurely pace to the point you forget its an action film in places. Which is just fine because what you're seeing is so enjoyable. By the time a wounded and horribly drunk Hogan has to shoot a stick of dynamite to blow up a bridge with the help of Sara's shoulder as a bench rest, you forgot that nothing has really happened for about half an hour.

When you list off Eastwood's impressive catalog of Westerns, most folks don't include Two Mules For Sister Sara in the pack. The problem there is Eastwood has so many amazing entries it's the easiest to forget in the heat of the moment. But all you have to do is wait for that opening credit music and that first gunfight where Hogan and Sara meet for the first time and you'll quickly remember why this is one of Eastwood's - and MacLaine's - best. It's often criticized and I think unfairly for being a Hollywood Spaghetti Western knock-off. Yeah, the Morricone score lends to that vibe, but the rest of it is its own beast. It looks and feels more like a Don Siegel movie above all other conventions.

Two Mules for Sister Sara is full of great action without losing focus on having a story. It's got romance and drama without being stuck in melodramatic mud. It's funny without waisting time punching for easy jokes. You take a great director, two amazing actors in their prime, and toss in a great script by Albert Maltz and Budd Boetticher and you have the perfect ingredients for one hell of an entertaining show.

Kino Lorber Studio Classics rides with Two Mules for Sister Sara on Blu-ray with a new two-disc release including the 105-minute Domestic Cut and the more commonly available 114-minute International Cut of the film. Both cuts of the film get their own Region A BD-50 disc and both discs are housed in a standard sturdy two-disc case with identical slipcover art and reversible insert artwork. Both discs load to static image main menus with traditional navigation options.

Sourced from a new 4K Restoration supplied by Universal Studios, both versions of Two Sisters for Sister Sara offer marked improvements over the previous 2014 release which suffered from some pretty obvious and unfortunate noise reduction and smoothing that pulled out the film grain and softened details. Here fine film grain is intact and maintains an organic look and feel throughout the film. It only becomes a bit more obviously visible during night sequences or if the scene is particularly dark to begin with. To that end, throughout the film details are terrific allowing fine facial features to appear much more life-like with the beautiful Mexican scenery populating the screen.

Colors are bright and bold - primaries have plenty of pop and presence with the blue skies overhead, the sandy yellow brush on the ground, and splashes of red throughout - with a big pop at the end! Black levels are dark and inky, some night scenes are a little more brown-ish, but several scenes where MacLaine's black costume still manages to stand out in pitch black backgrounds without crush. Free of any compression issues, the source is clean and fresh without any speckling or damage apparent. Another terrific movie I would love to see a 4K UHD Blu-ray release of, but as a replacement of the 2014 disc, this is a worthwhile upgrade.

This new release of Two Mules for Sister Sara sounds as though it earned a slightly rejiggered DTS-HD MA 2.0 mix for both cuts of the film. The 2014 disc had sort of flat texture to it and that's largely built into the sound design of the film, but here, the mix now feels like it has more impact during some key moments. Gunshots, but also explosions and the big final action sequence feel like they have more lifelike and atmospheric presence. A scene like the bridge explosion sounds stronger but some dialog exchanges still sound a bit on the flat side. That said, the dialog is clean and clear and Ennio Morricone's amazing score takes center stage - as it should! I love this score and it sounds amazing here. All around a fine mix, but maybe not entirely "new and improved" - or if it is, it's difficult to notice.

Two Mules for Sister Sara gives fans some new bonus features to pick through. I'm actually going to include the 105-minute domestic cut here as a consideration for bonus features. It's not the best version of the movie as it edits out a lot of the violence but also cuts some of the interplay between Eastwood and Maclaine to speed up the pace. It's really a curiosity, as since the early 90s the uncut International Cut has become much more common on home video. To that end, I'm glad that KLSC didn't feel the need to cram both cuts onto the same disc instead both cuts get their own discs to inhabit with full robust bitrates. After that, we have the Audio Commentary with filmmaker Alex Cox who always provides a lively commentary and is a clear fan here. There are several stretches where he doesn't say much but his anecdotes are always fun.

Two Mules For Sister Sara is Eastwood at his best with Don Siegel directing some great action and suspense while Shirley MacLaine gets to upstage everyone with a lively performance. While sticking to genre tropes, the film also breaks some of Eastwood's established molds with some entertaining interplay with MacLaine organically dipping in and out of comedy while still having a great action-movie heart.

Kino Lorber Studio Classics delivers a splendid two-disc Blu-ray release to replace Universal's older problematic 2014 disc. With a fresh new restoration, we get a welcome new video transfer offering notable improvements with a clean effective audio mix. Bonus features may not be plentiful but the audio commentary is worth it. If you're an Eastwood fan or need to add this the collection, Two Mules for Sister Sara is an easy one to call Highly Recommended.