The Hobbit: An Unexpected Journey

Overview - The Hobbit: An Unexpected Journey is the first chapter in Peter Jackson's new epic trilogy set in Middle-Earth 60 years before J.R.R. Toklien's "The Lord of the Rings" saga. Follow Bilbo Baggins (Martin Freeman) as he's swept into a quest to reclaim the lost Dwarf Kingdom of Erebor, long ago conquered by the dragon Smaug. Approached by the wizard Gandalf the Grey (Ian McKellen), Bilbo finds himself joining a company of thirteen dwarves led by the legendary warrior Thorin Oakenshield (Richard Armitage). Their journey will take them through treacherous lands swarming with Goblins and Orcs, deadly Wargs, giant Spiders, Shapeshifters and Sorcerers. They must escape the goblin tunnels, where Bilbo meets the creature Gollum (Andy Serkis), who will change his life forever. Alone with Gollum on the shores of an underground lake, the unassuming Bilbo Baggins not only discovers guile and courage that surprise him, he also gains possession of Gollum's "precious" ring that holds unexpected and useful qualities, tied to the fate of all Middle-Earth. Several key talent members from The Lord of the Rings trilogy reprise their roles, along with exciting new cast members.
OVERALL
Recommended 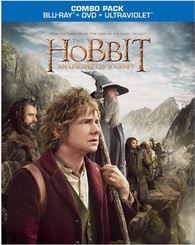 At times wondrous and somewhat exhilarating, 'The Hobbit: An Unexpected Journey' is an expedition that labors and plods through a wealth of exposition with very little progress or feeling of accomplishment, let alone satisfaction. Like bread crumbs leading audiences to their possible doom, bits of information are laid out before us and are intended to play more significant roles in later installments.

Granted, a whole lot of swashbuckling action and heroic sword-fighting takes place along the way, but it's all for naught the moment we discover we're only a third into the overall adventure. And can you imagine; it only took 170 minutes to even get that far. Never mind, we're teased with the idea of cutting the journey shorter if only a certain smart-alecky gray wizard (Ian McKellen) would call on his extraordinarily-large feathered friends to aid a merry company of dwarves. To be fair, that climactic scene with the eagles is directly taken from J.R.R. Tolkien's novel, so the question of why everyone doesn't simply hitch a ride to their destination originates there.

With the same CG spectacle and visual eye candy as seen in 'The Lords of the Rings' trilogy, director Peter Jackson returns to Middle-earth with the bloated idea of stretching a tale which Tolkien told in a single book into a three-part trilogy. A two-film series would have been more than sufficient and plenty fair, even at nearly three-hours each. Instead, Jackson designs a script, along with co-writers Philippa Boyens, Fran Walsh, and Guillermo del Toro, the latter of which was originally signed to direct, which expands that fantasy children's book by incorporating material from the original trilogy. The most obvious addition is Radagast the Brown (played to great comical effect by Sylvester McCoy), a character barely mentioned in the books but expanded in such a way as to play a major part in the plot.

The filmmakers also co-mingle a few very minor but equally nonsensical scenes with their attempt at being a faithful adaptation. At the risk of sounding like a total nerd, it was awe-inspiring to hear a quieter, more haunting version of Neil Finn's rendition of "Song of the Lonely Mountain," but was it really necessary to see the dwarves sing and do the dishes just prior to that? Looking ahead and reading the titles of the next two installments, Tolkien fans can easily see how the book will be divided into two more parts: the next ending with the demise of Smaug, the fire-breathing dragon which seized the dwarves' mountain, and the final chapter showing the Battle of Five Armies. On some level, it seems reasonable to imagine The Hobbit as a trilogy, but it also feels somewhat overstuffed and slow-paced because of the added details.


Nevertheless, in spite of what I see as minor drawbacks — much of which comes from my nerdy familiarity with the original book series, and as common sense would dictate, it's not fair to judge or compare the adaptation by the quality of its source — I found myself mildly entertained by Jackson's efforts. And honestly, I don't think I mind all that much some of the changes made in the plot and narrative.

In fact, I rather like Radagast, bird-poop and all, even if his appearance really only serves to fill time. Jackson has the character play a key role that eventually connects this film series as a prequel to his previous trilogy. I also like that the filmmakers move hints of Sauron's slow return much earlier in time with Radagast discovering the Morgul-blade. It leads to an interesting discussion between Gandalf (McKellen), Galadriel (Cate Blanchett), Elrond (Hugo Weaving) and Saruman (Christopher Lee).

In the middle of all this, Martin Freeman turns in a wonderful performance as the younger version of Ian Holm's Bilbo Baggins. Largely hesitant, timid, and anxiety-ridden, Freeman allows glimmers of a character with a great deal of potential for courage and plenty of room for growth, a likeable, witty hobbit who thinks quickly on his oversized, hairy feet.

Richard Armitage, better known for his television roles and as Heinz Kruger in Marvel's 'Captain America' film, joins the mythological adventure as the leader of the company of dwarves, Thorin Oakenshield. With a large chip on his shoulder and the sort of pride that can become a liability, Armitage is splendid in the role, allowing the character a perfect balance of hard-headed foolishness and the daring bravery that makes him admirable. And finally, Andy Serkis reprises his role as the memorable and often astoundingly realistic Gollum while also serving as second-unit director for many of the action sequences.

For all its minor, and arguably forgivable, imperfections, 'The Hobbit: An Unexpected Journey' remains an entertaining fantasy adventure. It's no 'Lord of the Rings,' but it's a decent start in the right direction.

Warner Bros. Home Video brings 'The Hobbit: An Unexpected Journey' to Blu-ray as a three-disc combo pack with an UltraViolet Digital Copy code. Housed inside a blue, eco-elite keepcase with a cardboard slipcover, the first two discs are Region Free, BD50s while the third is DVD-9 copy of the movie. Viewers are taken straight to an animated main menu screen with music and full-motion clips.

The package also includes an advertisement for buyer to watch an exclusive worldwide sneak peek of 'The Hobbit: The Desolation of Smaug.' Fans can visit a designated website and enter a 12-digit code provided to enjoy a video hosted live by Peter Jackson on March 24th at 3pm EST (or 12pm PST).

When it was first learned last summer that the filmmakers were shooting 'The Hobbit' at a high frame rate of 48fps, it was quite the controversy and caused a stir amongst those who felt the faster speed ruins the "cinematic look" (24fps) we've been accustomed to. Personally, it seems like a wasted effort since only a few theaters are equipped to project the film as it was intended, and the technology is not yet available for home theater, unless you consider the motion interpolation feature of HDTVs as delivering a similar effect. Honestly, I was more concerned to how this new frame rate would translate to Blu-ray since it has to be converted to the traditional 24fps (or 30 fps for DVD) in order for home viewers to enjoy.

Well, I'm happy to report that I noticed little to no difference whatsoever than if it were shot at the standard frame rate, although I must say the video does seem slightly smoother. In fact, the 1080p/AVC MPEG-4 encode looks utterly fantastic and rather remarkable in some areas. Panning and action sequences are uniform and ultra-slick, not even the smallest hint of motion judder, which would be expected in such instances. This leaves room for a more consistently sharp and highly-detailed presentation where we see every leaf in treetops, every blade of grass and every pebble on the road. Individual hairs in the beards of Gandalf and the company of dwarves are distinct, and each stitching in Bilbo's clothing is very well-defined. Close-ups reveal pores, wrinkles and negligible blemishes with lifelike textures.

Filmed entirely on a Red Epic camera system, the 2.40:1 image also displays a dazzlingly bold and colorful palette, even if the cinematography seems to favor the teal & orange aesthetic. Primaries are richly saturated and animated while a healthy assortment of secondary hues fills the screen with warmth and energy. A crisp, brilliant contrast allows for extraordinary visibility in the distance, exposing the tiniest objects in the background and the fine lines of various rock formations scattered throughout the New Zealand landscape. Black levels are true and inky, penetrating deep into the screen with luxurious gradations, while shadow details remain plain and sharply delineated. It's a splendid, demo-worthy high-def presentation fans will really enjoy.

The 'Unexpected Journey' also debuts with an explosive, reference-quality DTS-HD Master Audio soundtrack that will give any system a healthy workout. Starting in the front soundstage, the mid-range is amazingly extensive and broad, exhibiting the smallest detail with superb, crystal-clear clarity. The tiny pops and sizzles of crackling fire are perfectly audible, and distant, individual droplets of water while in Gollum's cave crash unto rocks with accurate, realistic definition. In action sequences, the upper ranges are precise and distinct, giving each roaring yell and clash of metal upon metal extraordinary intelligibility. Meanwhile, dialogue remains lucid and well-prioritized in the center.

The design also comes with a powerful and plentiful low-end that extends far back into the room and rattles walls on a couple occasions. Each thump of the horses' hooves and stomp of a Warg's paw is felt and loudly heard, and battle scenes can make the floor rumble with excitement. Along with the excellent dynamic range, the bass plays an appreciable role in Howard Shore's thrilling musical score, adding a great deal of depth and weight to the orchestration, especially when hearing the cellos and the low-pitched brass instruments. A few segments, such as when the company fights a trio of trolls or escapes from a horde of goblins, offer some fun palpable effects. However, this not the sort to ruin the foundation, as it never really digs deep and mostly remains in the mid to upper ranges of extension.

Rear activity is also filled with more excitement, as subtle ambient effects play almost non-stop throughout the film's runtime. All sorts of wildlife can be heard constantly making a racket in the distance, particularly in scenes with Radagast the Brown. As you'd expect from the several battles, arrows fly overhead, swords swing clear across the room and the goblins come in swarms from behind the listening area. Inside Gollum's cave, voices echo all around with remarkable realism, and panning is fluid and flawless, creating a stunning 360° soundfield that's immersive. Shore's music bleeds into the back channels and envelops viewers with exhilaration, making this a marvelous and highly-satisfying lossless mix audiophiles will absolutely love.

All the special features are located on the second Blu-ray disc.

Although failing to reach the heights of the original 'Lord of the Rings' trilogy, Peter Jackson's return to Middle-earth is nevertheless a mildly enjoyable fantasy adventure. Minor, negligible quips with the filmmakers bloating a single book into three films aside, 'The Hobbit: An Unexpected Journey' makes for a decent start to a larger trilogy that will hopefully provide a more satisfying piece of entertainment. The Blu-ray arrives with spectacular, demo-worthy video and a reference-quality audio presentation. Supplements could be stronger and more extensive, but there's plenty for fans to enjoy nonetheless, making the overall package recommended for the most enthusiastic of fans.