Since the invention of narrative cinema, the Western has been a staple genre. Through the silent years, talkies, color, television, widescreen, 3-D, the Western has been there. It's gone through iterations of being frivolous action adventures to deeply heartfelt character meditations. Henry King's 1950 entry The Gunfighter starring Gregory Peck bent the genre from cowboys and Indian shootouts towards a dramatic examination of the mythic western gunfighter. Peck is perfect in this slow-burn suspenseful character drama about a man who wants nothing more than to be left alone. The Criterion Collection gives the film a gorgeous new transfer and restored mono sound with a terrific array of bonus features to match. If you're a Western fan, this is an essential piece of the collection. Must Own.

The problem with a reputation as a lethal gunfighter is that it doesn't only follow you where ever you go - it's often a few miles ahead of you. Jimmy Ringo (Gregory Peck) is a gunfighter of reputation. All he wants is a quiet place to rest and for once enjoy a drink without being run out of town or have a young gunny challenge him. After killing one such kid called Eddie (Richard Jaeckel) picks a fight, Ringo is on the run again with Eddie's three Brothers (Alan Hale Jr., David Clarke, John Pickard) riding his dust. Riding into Cayenne, Ringo hopes to outrun his past and find a future with his lost love Peggy (Helen Wescott) and their son. But his old partner Mark (Millard Mitchell) is the new Marshal and he knows the danger that comes with a man like Ringo in town whether Ringo starts the fight - or finishes it.

Before classics like Shane, 3:10 to Yuma, or High Noon - there was Henry King's The Gunfighter. While there are many amazing entries in the genre prior to this film's 1950 release, there wasn't one that really slowed things down and looked at the western myth that had been cultivated in movies up to that point. There had been movies like The Oxbow Incident where the old west served as a backdrop to a suspenseful morality play - but there really hadn't been a film that objectively challenged the iconic gunfighter as hero myth. Working from an Oscar-nominated script by William Bowers and André De Toth (House of Wax), Henry King with editor Barbara McLean deftly crafts a suspenseful drama where our main character does little more than sit at a table in a saloon - but the town and everyone eager to challenge him closes in on him.

The better end of thirteen years before he would win his Oscar for To Kill A Mockingbird, Peck was already honing his persona as a man of reason. His Jimmy Ringo has killed, but all of his killings were justified. When Richard Jaeckel's Eddie gets the sand in him to test Ringo, the exhausted gunfighter does everything he can to tame the wild buck. He knows how this is going to end because he's gone through the exact scenario too many times. You can see the absolute exhaustion in Peck's eyes as he does anything from offering to buy the kid a drink to even conceding cowardice to keep the kid out of an early grave. 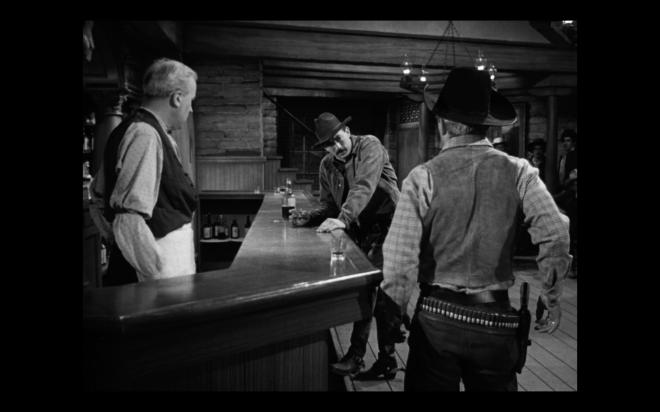 Then we have Millard Mitchell's Marshal Mark Strett. He knows Ringo personally; they rode together years earlier but Mark was smart to get out before a reputation took hold. He loves his friend and wants to help him, but knows he can't do it by letting him stay in town. While he sympathizes with Ringo's goal of reconciliation with his old flame, deep down he knows the best for everyone is to get Ringo out of town as fast as possible before someone with a cocked eye for revenge or another young local like Hunt Bromley (Skip Homeier) takes a shot at him and an innocent is caught in the crossfire.

Throughout the entire film, Henry King works to keep building suspense without using a shootout to add any pep to his play. A gunfight in a western usually goes one of two ways - it can add excitement and thrills to the story, or it bogs it down because the script literally had nothing left to it. This is a movie where a ticking clock of impending doom forces our leads to action. Mark wants Ringo out to save his life but Ringo won't leave without seeing Peggy in person - even if that means he dies. As the two but heads about what to do, the danger slowly closes in as all the townspeople watch through the saloon windows. For a time John Wayne wanted to play Ringo but the project slipped away. Watching The Gunfighter it feels Wayne's career found a fitting end with Don Siegel's The Shootist essentially playing a much older version of Peck's Jimmy Ringo.

I had been on the hunt for The Gunfighter for a long time now. I saw this the better end of twenty years ago when I was a kid and thought it was amazing because it wasn't like any western I'd seen. The closest I could compare it to at that point was Unforgiven. I don't remember if it was on TV or if my dad had rented it, but I never remembered the name, I only remembered it was about a guy at a bar that people kept trying to kill. It wasn't until a few years ago that I randomly turned on TCM at my In-laws' and was instantly hit with that wave of childhood nostalgia. I love it when I get to rediscover something that really turned my head as a kid and find that the film is just as effective. Now to have it fully restored on Blu-ray is a treat. I held off buying a DVD simply for the hope that a halfway decent Blu-ray would arrive but I'm glad to see The Criterion Collection stepped up to the challenge for this one. For me, it's an iconic Western and deserves more recognition.

The Gunfighter earns its first Blu-ray release thanks to The Criterion Collection. Housed in Criterion's standard clear case with spine number 1053, the Region A BD-50 disc loads to Criterion's typical static image menu structure. Also included is a leaflet with essay by film critic Austin Collins.

Fresh from a new 4K restoration effort, The Gunfighter rides onto Blu-ray with a beautiful and often visually stunning 1080p 1.33:1 transfer. From the first frame to the last, this is about as perfect as a restoration can get. Film grain has a natural and healthy presence allowing for robust fine details to seep into the image. Facial features, clothing, the terrific production design work of the small towns - right down to the faded paint lettering on the saloon walls is clearly visible. Grayscale is topnotch allowing for the full range from deep inky black to brilliant white and every shade in between to be appreciable. Image depth is terrific - particularly when in the open desert but also whenever Ringo is in the bar, he's always at one end with the rest of the townies at the other and the deep focus photography is often stunning. After this restoration, there aren't any notable signs of age or wear and tear to speak of. Again this is about as perfect as it gets for a classic film restoration.

Just as impressive as the video restoration work is the new LPCM 1.0 mono track. This is a lively healthy mix from the get-go. Even as a mono, there's a terrific sense of space and atmosphere to every scene. I particularly love the saloon as Jimmy Ringo anxiously waits and hopes for Peggy to walk through the door, the clock on the wall has this subtle faint tick-tick-tick that's just audible enough to here but not so overt that it calls attention to itself. The few bursts of gunfire crackles through the scene perfectly. Dialog is always clean and clear and the wonderful score from Alfred Newman is beautiful material and fills out the soundscape.

Bonus features may not be plentiful, but in the standard form for a Criterion Collection release - they're all top quality. Kicking things off is an excellent look at the life and work of director Henry King by filmmaker Gina Telaroli who really offers up some great insight and analysis about his career. J.E. Smyth's tribute to editor Barbara McLean is just as informative examining the editor's career early in the silent years and how quickly she mastered sync sound editing and how well it worked with the visual end of storytelling. The archival audio interview with Henry King from 1971 is great stuff as well while most of the material is focused on what its like working within the 20th Century Fox studio system. Accompanying the Henry King audio interview is an audio interview from Barbara McLean from 1970- this material is especially interesting if you're interested in the editing process and crafting a story.

The Gunfighter is one of the smartest westerns ever made. Henry King's deft touch behind the camera with Gregory Peck's magnetic performance up front sells this terrific genre deconstruction. The plot of the gunman tired of killing has become a bit of a cliche these days, but it started with this film and it was a novel plot in its day. 70 years later the film remains a genre standout. The Criterion Collection gives the film it's due on Blu-ray offering fans a gorgeous new transfer, excellent audio, and a few interesting bonus features to match. If you're a fan of Westerns - let alone great cinema - The Gunfighter is an essential piece. Must Own