A slice of 1970s ghetto life filled with warmth, sass, and relatable themes, Claudine celebrates the black female experience and stands as one of the first films to realistically depict African-American family dynamics. James Earl Jones and Diahann Carroll shine in this delightful and astute comedy-drama that holds up well more than 45 years after its initial release. A new 4K restoration distinguishes Criterion's Blu-ray presentation, which also includes solid audio and a few absorbing supplements. Recommended.

Today, Claudine plays like a harmless, charming romantic comedy, but back when it premiered in 1974, it made some waves. Though this smart, sensitive film about a twice-divorced mother of six who lives in a tiny New York City ghetto apartment may lack the flash of the street-wise blaxploitation flicks that flooded theaters at the time, in many ways it's just as bold. The kinder, gentler, but still incisive Claudine celebrates African-American pride by focusing on an average family with relatable problems and their struggles to keep their heads above water. Director John Berry's film also gave contemporary viewers a frank depiction of a black romantic relationship, emphasizing love and devotion while not ignoring a healthy interest in sex.

Claudine Price (Diahann Carroll) works as a housekeeper for a white middle-class suburban couple who pays her under the table so she can continue receiving her state welfare checks. An innocent flirtation with local sanitation worker Rupert "Roop" Marshall (James Earl Jones) leads to a hot first date that's somewhat tempered by Claudine's boisterous, needy brood, who range in age from 3 to 18. Roop is a dad, too, but has no contact with his two kids, and the prospect of adopting Claudine's family tests both his mettle and willingness to commit. As their romance progresses, the two must navigate a host of crises as well as a labyrinthian social welfare system that seems to be specifically designed to keep them oppressed.

Can love conquer all in the Harlem slums and lead to a brighter, more stable future for a couple who can't catch a break? The odds are stacked against such an outcome, but Claudine and Roop try to finesse all the roadblocks the kids, the system, and their own stubborn personalities put in their way. 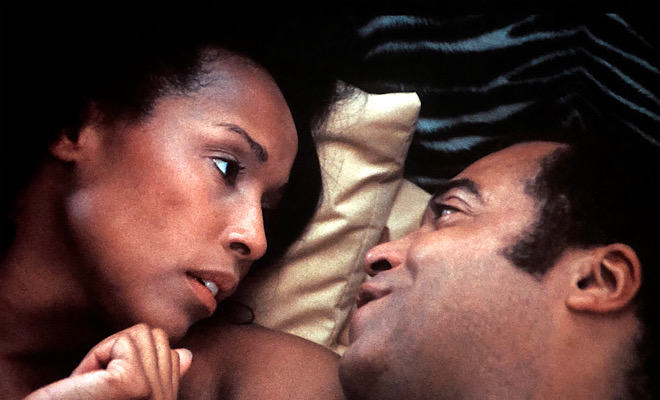 Claudine deftly mixes comedy, drama, and romance, while packing plenty of social issues into its lean 92-minute running time. The snappy screenplay by the husband-and-wife team of Tina and Lester Pine covers teen pregnancy, deadbeat dads, coming of age, civil protesting, discrimination, and bureaucratic red tape, but always keeps relationships front and center. Nothing matters more to Claudine than her kids, and assimilating the irresponsible yet lovable Roop into that finely oiled yet slightly dysfunctional dynamic forms the crux of the narrative.

The best scenes, though, depict Claudine's struggles to manipulate the rigid, grossly unfair welfare system and convince her social worker she's not a "welfare queen" who lazes around her apartment and happily lets the government support her. Despite her housekeeping job, Claudine needs her monthly government check to make ends meet, and the film cleverly shows how aid programs often put their recipients between a rock and a hard place as they toil to dig themselves out of poverty.

Director Berry, who helmed movies way back in the 1940s and might have forged a lofty career had the industry not blacklisted him during the McCarthy era, gives Claudine a gritty 1970s vibe. The garbage-strewn streets of New York reflect the grime Claudine and Roop strive to rise above, yet Berry doesn't let the setting weigh down what is in essence an uplifting, life-affirming film. The terrific soundtrack, written by Curtis Mayfield and performed with panache by Gladys Knight and the Pips, also infuses the story with a soulful energy that buoys both the characters and audience. 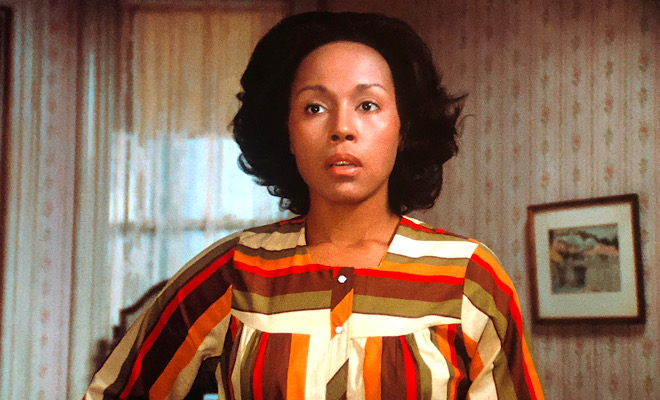 It's tough to steal the spotlight from James Earl Jones, but Carroll is so vital, sassy, warm, and sexy it's impossible to concentrate on anyone else while she's on screen. Though she only got the role because, quite tragically, actress Diana Sands had to bow out of the project due to a terminal cancer diagnosis just after shooting began (she died a few moths later), Carroll completely embodies it and earned a well deserved Best Actress Oscar nomination for her portrayal. In between her groundbreaking TV successes on the sitcom Julia and primetime soap Dynasty, Carroll proves she's a magnetic cinematic force as well, and her beaming face at the film's fadeout puts a triumphant exclamation point on a story of love and liberation.

Jones, though, is hardly chopped liver. One of the greatest actors of our generation oozes charm and soul as Roop, who represents many of the struggles black men faced during that turbulent era. In his film debut, Lawrence Hilton-Jacobs, perhaps best known for playing high school student Freddie "Boom Boom" Washington on the TV sitcom Welcome Back, Kotter, also impresses as Claudine's oldest son Charles, who must balance his burgeoning independence and rebellious nature with a strong devotion to his mother and siblings. Becoming a man is never easy, but becoming a responsible, upright black man in 1970s New York was very tough indeed, and Hilton-Jacobs walks the tightrope between delinquency and maturity with aplomb.

Claudine may no longer tell it like it is - although many of the problems Claudine faces still plague black women today - but it surely tells it like it was. This sweet yet spicy film opened plenty of (mostly white) eyes upon its release and provided another essential window into the African-American experience. Its hopeful message still rings true today, and though we've come along way baby since 1974, if 2020 has taught us anything, it's exposed how far we still have to go. 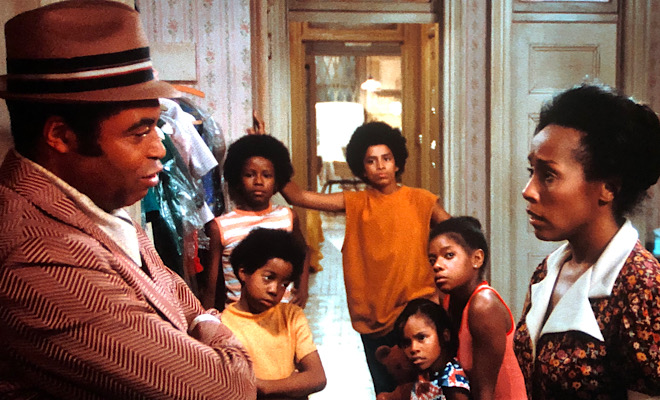 Claudine arrives on Blu-ray packaged in a standard Criterion case. A 12-page, fold-out booklet featuring an essay by writer Danielle A. Jackson, several illustrations, a cast and crew listing, and transfer notes is tucked inside the front cover. Video codec is 1080p/AVC MPEG-4 and audio is LPCM mono. Once the disc is inserted into the player, the static menu with music immediately pops up; no previews or promos precede it.

According to the liner notes, "This new digital transfer was created in 4K resolution from the 35 mm original camera negative...The 4K restoration was carried out under the supervision of the Twentieth Century Fox Restoration Department."

The 1080p/AVC MPEG-4 rendering exhibits a lovely film-like appearance. Grain is a bit heavy at first, but its intensity diminishes over the course of the movie's running time. Excellent contrast and clarity highlight fine details and heighten depth, and bold colors lend the picture a fair degree of pizzazz. Reds and greens are especially lush, the orange hues that defined 1970s decor exude a nice sheen, and flesh tones appear natural and remain stable throughout. Rich blacks anchor the image, whites are crisp, patterns resist shimmering, and shadow delineation is strong.

Even without makeup, Diahann Carroll looks stunning throughout, and an array of glorious close-ups showcases her flawless complexion. Just a couple of errant marks dot the pristine print and no digital anomalies distract. In the end, this transfer of Claudine upgrades the visuals without sacrificing the urban grit that's such a vital component of this film.

The liner notes state "the original monaural track was remastered from the 35 mm magnetic tracks," and the resulting LPCM transfer pumps out clear, well-modulated sound. Claudine boasts a kick-ass soundtrack with an array of Curtis Mayfield songs performed to perfection by the incomparable Gladys Knight and the Pips, including the top-10 hit "On and On." Terrific fidelity and depth of tone bring the vocals and instrumentals (Mayfield also scored the movie) to brilliant life, and a wide dynamic scale handles all the highs and lows without a hint of distortion. Dialogue is well prioritized and easy to comprehend, sonic accents like car horns, sirens, and fisticuffs are crisp and distinct, and no age-related hiss, pops, or crackle intrude.

A few choice extras add context and perspective to this fine film.

Claudine broke ground at the time of its release and today remains an affecting portrait of the female black experience during the mid-1970s. Director John Berry's film about a single mother, her rowdy brood, and the strapping sanitation worker who steals her heart addresses some potent themes within the rom-com format and features excellent performances from James Earl Jones and an Oscar-nominated Diahann Carroll. A brand new 4K restoration distinguishes Criterion's Blu-ray presentation, which also features solid audio and an array of absorbing supplements. Claudine is warm, sexy, light-hearted, and eminently relatable, and comes heartily recommended.